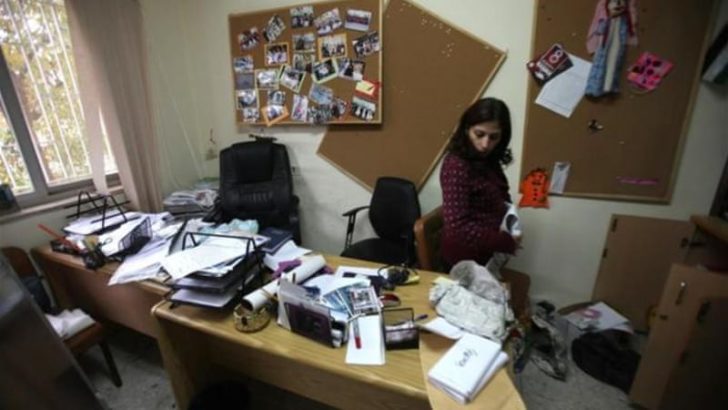 Israeli military raided a Palestinian NGO in the middle of the night, confiscating electronics and doing damage to Palestinian rights – but not to aspirations for justice.

Israeli occupation forces raided today, Thursday, 19 September 2019 at around 2:00am the office of Addameer Prisoners Support and Human Rights Association.

This is the third incident where the Israeli soldiers have raided the office, the first was in 2002 and the second incident was in 2012.

Addameer reassures that those constant raids will not stand in the face of any duties the organization has for Palestinian political prisoners. The organization will continue to support Palestinian prisoners to flight all human rights violations they suffer from including torture, arbitrary detention and unfair trails.

Addameer sees this Israeli raid as a part of ongoing and systematic attacks against the Palestinian civil society organization. Those attacks are targeting the organizations that have a role in facing the occupation’s violations and claiming accountability for those violations. This is additionally a part of the occupation’s campaign to shrink space, delegitimize and de-fund those human rights and civil society organizations.

ADDAMEER (Arabic for conscience) Prisoner Support and Human Rights Association is a Palestinian non-governmental, civil institution that works to support Palestinian political prisoners held in Israeli and Palestinian prisons. Established in 1992 by a group of activists interested in human rights, the center offers free legal aid to political prisoners, advocates their rights at the national and international level, and works to end torture and other violations of prisoners’ rights through monitoring, legal procedures and solidarity campaigns. Read about their programs, vision, and goals here.

Testimonies from some of the 8,000 Palestinian children Israel has imprisoned (since 2000)