You Are Here: Home → If Americans Knew: “This is why we exist”

If Americans Knew: “This is why we exist” 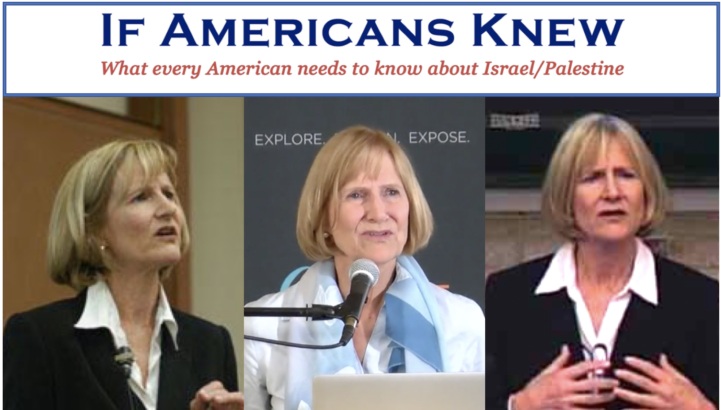 If Americans Knew was born out of Alison Weir’s deep conviction that the oppression of Palestinians at the hand of Israel may finally end if Americans discover the truth about the complicity of the United States in the illegal, immoral occupation. #IStandWithAlisonWeir

Alison Weir has weathered criticism and hate, slander and insults, in the quest for justice for Palestinians. Her organization, If Americans Knew, reconfirmed its reason for existence in the ups and downs of a recent, difficult controversy.

For eighteen years and counting, If Americans Knew has been on the front lines of a battle for a thin slice of the souls of Americans.

The issue is, for some reason, deeply controversial, and the fight has been relentless. But Alison Weir and her small team are single-minded and steadfast because they believe in their cause utterly. They believe Americans will call for justice when they are awakened to compassion for the people of occupied Palestine.

Events over the last several weeks offer an example of the definitive struggle of If Americans Knew, and the essence and the purpose of its existence. 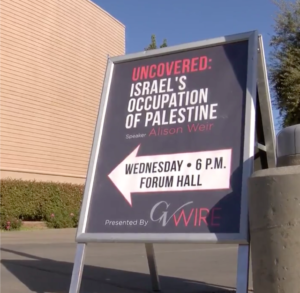 In late August, GV Wire, an award-winning news outlet in central California, announced that Alison Weir would be coming to Clovis Community College in Fresno to speak on the topic, “Uncovered: Israel’s occupation of Palestine.”

Alison has spoken hundreds of times, all over the country and around the world. She expects opposition – because rarely does one speak critically of Israel without repercussions – and true to form, Israel partisans attempted to shut down the event.

It started with criticism of the event by several global pro-Israel organizations, among them the American Jewish Committee (AJC) and the Anti-Defamation League (ADL). They called for the event to be cancelled, making various allegations against Alison, including anti-Semitism and white supremacist affiliation.

These allegations have been used against Alison for years – and for years she has denied them. She has explained in detail, in writing, why the claims are patently false. Yet they persist.

The fact that old, false allegations keep reappearing may suggest that Israel’s defenders don’t do their own research, but rather follow orders from organizations like ADL and AJC. (It also indicates that these groups can’t find anything new to complain about.)

This would explain why, when the criticism moved from remote to up close and personal, the same unsubstantiated accusations kept coming back in inflammatory tweets that exaggerated the false claims even further, including

Naturally, this uninformed anger* led to plans for confrontation (which caused some of Alison’s colleagues to worry about her safety):

Ultimately, these protest threats were either a hoax intended to get the event canceled, or the agitators were ordered to stay home: no protest materialized and the evening passed without incident. The auditorium at the Clovis Community College was packed, and the audience listened to every word. The security guards who had been hired to keep the peace instead watched the presentation and applauded at the end. 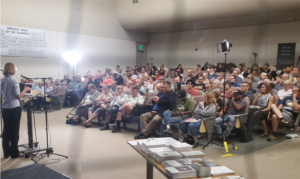 Afterwards, many lined up to buy autographed copies of Alison’s book, “Against Our Better Judgment: the hidden history of how the US was used to create Israel.”

The If Americans Knew team considers this a major victory – not because we beat the opposition, or even because the First Amendment was upheld, but because the truth was told to new listeners. And when that happens, hope grows – not just IAK’s hope to make it through another fiscal year, but a much larger hope. A hope that truth will triumph – and proof that regular people can win out over big money and power. To those who routinely follow the dictates of these organizations, we hope you will acknowledge how they have failed to be honest with you, and form your own – enlightened – decisions.

Here’s where the story gets really good.

Imagine all the people

When the online attacks against Alison and IAK got loud, something beautiful happened.

When the opposition got ugly, supporters rose up from all over the world, to bring words of encouragement, to champion the cause that has been so maligned – not IAK’s cause, but the cause of a profoundly oppressed yet resilient people: the Palestinians.

And it gets even better.

From Palestine, with love

As much as we value Alison’s supporters, the following messages were even more precious – from our brothers and sisters, the people of Palestine. These are the people for whom Alison and her team wake up every morning. They carry us past the criticism and hate, the slander and insults. This is why we do what we do:

For these dear people, we will fight another day. Inshallah full victory will come to them.

America (and world), how’s your soul?

* Some of these tweets and Facebook posts may have come from fake identities created by Israelis. See this.