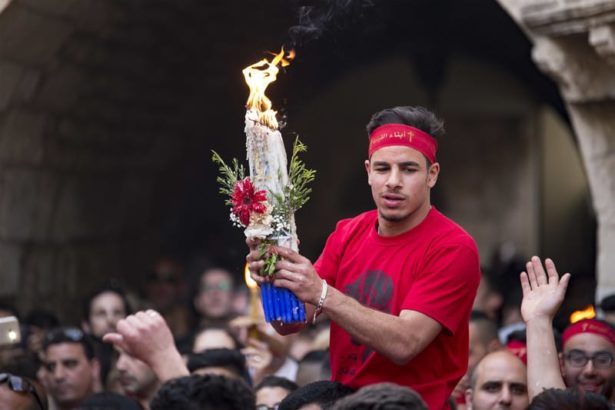 Israel’s callous disregard for Palestinian freedom to worship grows even more brazen than usual this Easter, adding to an already long list of human rights abuses. It’s business as usual under occupation.

by Tamara Nassar, The Electronic Intifada

Israel is blocking hundreds of Palestinian Christians in Gaza from praying at the Church of the Holy Sepulchre in Jerusalem this Easter.

Meanwhile, Israel is imposing a tight closure on all Palestinians in the occupied West Bank and Gaza Strip for nine days around the Jewish Passover holiday.

COGAT, the bureaucratic arm of Israel’s military occupation, stated that only those over the age of 55 will be allowed out of Gaza to visit the church in Jerusalem where Christians believe Jesus was buried and resurrected.

Israeli occupation authorities said they would grant 500 exit permits to Palestinian Christians from Gaza this year, despite the fact that only about 120 meet the age restriction.

“Many will not be able to travel without relatives who are under the age limit,” Israeli newspaper Haaretz stated.

But Israel routinely imposes arbitrary age restrictions, such as it did last Ramadan on Palestinian Muslims entering Jerusalem from other areas of the occupied West Bank.

Israel typically announces its holiday permit policies at the last minute, sometimes even after a holiday begins, according to Israeli rights group Gisha, making it difficult for Palestinians to plan travel.

Sometimes Israel grants permits to some family members and not others, forcing families to separate during holidays or abandon a trip altogether.

In a video on COGAT’s Facebook page earlier this month, Israeli military officer Alaa Halabi demanded that Palestinian Christians who left Gaza using their Christmas permits and never returned do so immediately.

“The situation will make it difficult for us to endorse other steps in favor of the Christian population,” Halabi said.

Gisha called “this address to Gaza’s Christian community, the reduced Easter quota and the age limitation” an open “act of collective punishment against Christians in Gaza.”

Gisha called on Israel “to respect Gaza residents’ fundamental rights to freedom of movement and religious freedom, which includes traveling for prayer at the holy sites and celebrating with family.”

Ben-Dahan has previously stated of Palestinians that “to me, they are like animals, they aren’t human.”

Israel’s restrictions on worshippers from Gaza will not be its first harassment of Palestinian Christians this Easter season.

Palestinian Orthodox Christians also observe the Holy Fire ceremony the day before Easter – a ritual in which a flame is lit in the Church of the Holy Sepulchre and brought to other churches in various Palestinian cities.

Israel restricts Palestinians from moving freely in the occupied West Bank, forcing the Holy Fire to pass through checkpoints to reach its destinations.

The Church of the Holy Sepulchre closed its doors last month in protest of a bill that would allow Israel to expropriate land sold by the Greek Orthodox and Roman Catholic churches to private developers.

Israel later froze the bill and postponed the collection of taxes from church-owned properties and United Nations institutions in Jerusalem, after hundreds of Palestinians protested the measure.

While cracking down on Palestinians’ Easter worship, Israel is also imposing draconian restrictions on all Palestinians during Passover.

For nine days from Thursday evening until 7 April, Israeli occupation forces are closing all checkpoints in and out of the occupied West Bank and Gaza Strip to virtually all Palestinians.

Meanwhile, Jewish groups posted notices on the gates of the al-Aqsa mosque compound this week demanding that Palestinians evacuate the area entirely for the start of Passover on Friday so they can carry out sacrifice rituals.

Israel is also barring bread from being brought into hospitals, effectively forcing everyone using the facilities to observe strict Jewish dietary laws during Passover.

Mossi Raz, one of several lawmakers challenging the ban in court, said, “What democratic state tells people what to eat?”