You Are Here: Home → IDF snipers: choosing who to shoot 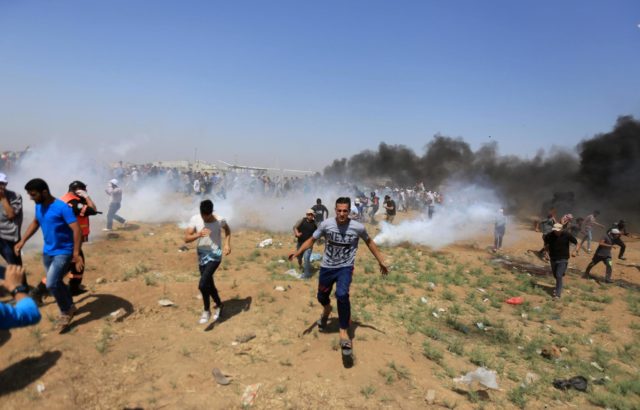 A former soldier, now Breaking the Silence spokesperson, explains how Israeli sniper teams operate, including the open fire policy in use at the Gaza border. Regulations for shooting are a “military secret,” designed with enough ambiguity to protect the shooters no matter the target or circumstances.

Editor’s note: In recent weeks Israeli forces killed at least 140 Palestinians and wounded more than 16,000 in confrontations at the fence that divides the Gaza Strip from Israel. The sheer number of shots fired at demonstrators has raised questions about the Israeli military’s rules for using live-fire. Stephen Shenfield writes that in recent years the rules were stricter.

Snipers (sharpshooters) constitute about a quarter of all soldiers in the IDF’s combat units. The standard course for the training of snipers lasts five weeks. The best snipers, however, are Russian immigrants who fought in Chechnya.

Snipers are organized in teams that form part of infantry battalions. Snipers are equipped with special rifles of various makes. Since 2010 the best rifle at their disposal has been the HTR 2000, which has a range of over 1,000 meters. Older makes have somewhat shorter ranges — several hundred meters.

Each team of snipers contains a specialist called the locator, who plays a key role in choosing targets. On April 10 a former locator by the name of Nadav Weiman talked on Israeli television to Channel 10 about his experience in a sniper team of the Nahal Reconnaissance Platoon on the Gaza border. (He now works for the organization Breaking the Silence as head of its education department.)

Here is how Weiman describes his work as a locator:

“I would sit with binoculars and an electro-optic lens during the day and a thermal lens at night. I would identify a figure, see if he was armed, then I would measure the distance with a laser meter and check the wind with an electronic weather vane. Then I would give the snipers correction data and count down 3, 2, 1, fire!”

It is of interest to compare this account of the pre-firing procedure with that given on April 1 by Major General Haim Cohen, commander of the Shaked Battalion near the southern end of the Gaza Strip, on the Galatz military radio station. Cohen omits the technical detail provided by Weiman but emphasizes two steps that Weiman fails to mention: (1) obtaining authorization to fire from a commander; and (2) warning the targeted individual by means of a PA system. According to Cohen, there was a commander next to each sniper team and it was he who gave the order to fire. But Weiman says that when he was in the army it was he, the locator of the team, who gave the order.

Both Weiman and Cohen say that the choice of targets is in principle guided by the open fire regulations. These are the regulations that Israeli human rights NGOs tried but failed to challenge before the Supreme Court on April 30. The precise regulations are classified, yet the Israeli network i24 reports they are “widely known in a country where most Israelis perform compulsory military service.”

The open fire regulations, especially in their current form, mandate the shooting not only of armed but also of unarmed individuals who have been assigned to certain categories. One such category is the “main inciter” who “inflames” those around him.

How do you identify a “main inciter”? That, says Weiman, is “the million dollar question.” It is left to the judgment of the locator or commander on the spot. It cannot be based on what the suspect is saying because the decision maker cannot hear him (and is also unlikely to understand Arabic). He can only observe him visually. In practice an “inciter” is probably just someone who stands out in some way.

Another category mentioned by Weiman — albeit in a different context, namely, that of Operation Protective Edge in the Gaza Strip in 2014 — is the “scout”. Weiman and his fellow soldiers were ordered to shoot any Palestinian, even if unarmed, carrying an object — it could be a cell phone or binoculars — that he might be using to direct or assist combatants.

The radio interviewer asks Cohen about the relationship between permission to shoot and distance from the fence. Is there a forbidden zone and how far does it extend? Cohen’s answer is not very clear but he does refer to a 100-meter-wide “perimeter zone”. However, many demonstrators in his sector were at distances of 70–80 meters, i.e., well within the perimeter zone, and were not shot solely for that reason — unlike those who approached very close.

Weiman concludes that the open fire regulations impose no effective constraints. Category definitions are so vague that they can be used to justify practically any target. This makes it very difficult to prove that a specific shooting violated the regulations. At the same time, IDF spokesmen constantly cite the existence of the regulations — their content, as you will recall, is a military secret — as a reliable safeguard against abuses. Catch 22.

However, perhaps Weiman exaggerates a little. Permissive as the regulations may be, it is doubtful whether, for instance, they allow the shooting of medical personnel wearing distinctive uniforms and holding their hands up like the nurse Razan al-Najjar. Another factor must be at work.

That factor is the perception of the Gaza Strip as a free fire zone where anyone can be shot and killed with impunity. This perception has developed within the IDF over the years in the course of successive punitive operations. At an earlier stage in the process some kinds of target were still off limits, such as women and people holding a white flag. But in recent years the situation has reached a point where soldiers are permitted to shoot at anyone they see.

As a result, many killings lack even the most tenuous security rationale. In Operation Protective Edge, for example, one tank gunner was told by his commander to fire a tank shell at any target as commemoration for a fellow soldier who was killed. As a sort of game, he and his buddies tried to hit cars moving along one of the Gaza Strip’s main north-south roads. It may therefore be presumed that many of the Gaza demonstrators who have been maimed or killed were shot just for fun, to alleviate boredom, or to express hatred of the “enemy population”.