You Are Here: Home → Freedom Flotilla leaves Palermo to break the illegal Israeli blockade of Gaza 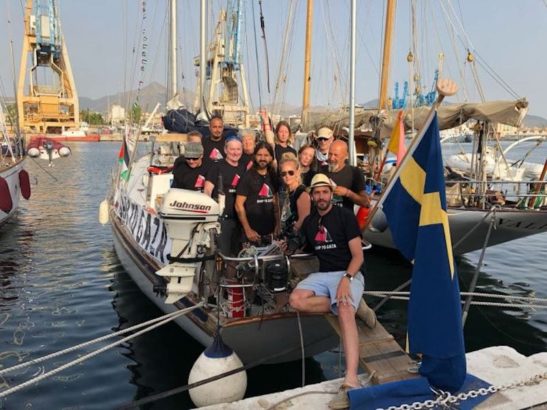 The 2018 Gaza Freedom Flotilla, filled with humanitarian aid and activists from all over the world, is on the last leg of its journey from Sweden  to Gaza. Previous attempts of this type have been stopped for the last 7 years, once with the loss of 10 activists’ lives at the hands of Israeli commandos.

from the Freedom Flotilla Coalition

Three boats are sailing with boxes of medical supplies: Al Awda (The Return), a large converted fishing vessel; Freedom to Gaza, a large sailing vessel; and Falestine, a smaller sailing vessel. A fourth boat, Mairead, will not sail at this time. Another Sicilian port, Messina, opened its open civil society arms as usual with a series of wonderful community events, and we are grateful for their solidarity.

All three boats making their way to Gaza  will be donated to the Union of Agricultural Work Committees, that includes a fisherman’s union that will use the boats to fish in order to feed their families.

Spokesperson for the Swedish Ship to Gaza campaign, Jeannette Escanilla, said the boats would provide important economic and training opportunities for Palestinians trapped in Gaza.

“The illegal Israeli naval blockade has devastated the Palestinian economy, and in particular has hurt the fishing industry in Gaza, so these boats will provide important economic opportunities for Palestinians in Gaza, and also training opportunities in sailing, to enable them to gain better qualifications. Currently, the Israeli Occupying Force prevent Palestinians in Gaza from sailing more than a few nautical miles from shore, and routinely attack fishing and other boats from Gaza.”