You Are Here: Home → 25 years after an Israeli massacred 29 Palestinians, victims are still being punished

25 years after an Israeli massacred 29 Palestinians, victims are still being punished 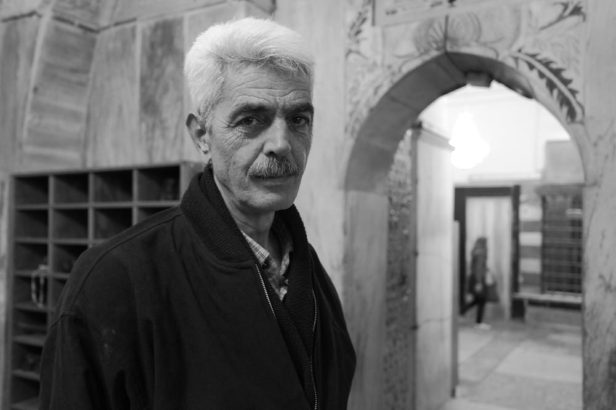 Hakam Tahboob has been a guard at the Ibrahimi mosque for 31 years, and was there during the shooting: “Goldstein used to come every night and pray at Yakoob’s tomb. We know now that he was watching us and planning. The Israeli government wanted to get us out of the mosque.”

Today marks the 25th anniversary of Israeli settler Baruch Goldstein’s massacre of 29 Palestinians as they prayed. Israeli soldiers blocked Palestinians who tried to flee and who wanted to enter to help the victims.

The repercussions of the attack are still felt keenly by Palestinians in Hebron, who have seen their rights eroded and their formerly bustling city centre turn into a ghost town.

“Since the massacre, everything changed.”

Jamal Fakhoury, 40, struggles to find the right words to describe his hometown.

With a furrowed brow and damp eyes, he utters: “Every day it’s a difficult life for Hebron.”

Fakhoury is reflecting on the Ibrahimi mosque massacre – the 25th anniversary is on Monday – and its impact on the southern occupied West Bank city.

On 25 February 1994, a Jewish-American settler named Baruch Goldstein opened fire on Palestinian worshippers inside the Ibrahimi mosque – also known as the Tomb of the Patriarchs – in the centre of the Old City of Hebron.

Goldstein killed 29 men in an instant, and injured well over 100 more. Six other Palestinians were killed by Israeli security forces in the ensuing chaos.

Although it is the biggest city in the West Bank, Hebron’s residents are interconnected in almost every way through its cultural and family structures. Nearly every citizen has ties to the Ibrahimi mosque massacre through some relative, friend or neighbour.

“A settler from the US came and killed Palestinians,” Izzat Karaki, a 29-year-old activist with the Palestinian-led group Youth Against Settlements (YAS), said exasperatedly. “And after that they punish us, the victims.”

Beyond mourning for the lives lost, the attack has also affected the people of Hebron – and its generations to come – in a profound and structural way.

“Before the massacre, I felt something like peace in the old city,” Fakhoury recalls.

He is from the Old City and still resides there, just around the corner from Shuhada Street and the mosque.

Along some two kilometres, Shuhada Street is tightly packed with shops sitting below several-storey high homes. The road leads directly to the Ibrahimi mosque and once stood as the heart of the Old City.

Munir, 65, owns a shop directly across from the mosque that remains open to this day. He likes to show laminated pictures to passing tourists of the bustling Shuhada Street back in its heyday, brimming with cars and people.

He does point out that the First Intifada, which started in 1988, only ended in 1993, five months before the massacre. “The six years of the Intifada were really not a normal time,” he said, pointing out that the area around the mosque “was part of the ‘playground’ where the Intifada took place”.

But, he explains, “before, this area was full of life”.

“We used to have four people working in this place,” Munir continues, showing the shop where he is standing. “Today, it is me alone and I am also taking care of two stores which belong to my neighbours.”

“After the massacre, the mosque was closed for six months, and they [Israeli forces] closed Shuhada Street,” Karaki tells MEE.

For nearly three months, Karaki said, Palestinian residents of Hebron lived under an Israeli-imposed curfew while military checkpoints were built in the Old City – checkpoints that are still present today.

When the Tomb of the Patriarchs and the surrounding area was reopened to the public, the religious site had now been divided into two – a synagogue on one side, a mosque on the other.

Palestinians were no longer allowed to drive cars in the area, Munir says, and the number of Israeli soldiers and cameras around the Ibrahimi mosque dramatically increased.

The post-massacre changes made to the city were in a lot of ways a preface to the dramatic transformation that the Hebron Protocol was to create three years later.

The 1997 agreement between the Israeli government and the Palestine Liberation Organisation divided the city into two areas: Palestinian Authority-controlled H1 and Israeli military-controlled H2.

In H2, making up nearly 20 percent of Hebron, some 40,000 Palestinians currently live under Israeli military law, while the 800 Israeli settlers in H2 are ruled by Israeli civil law.

“Animals here have rights more than us,” Karaki exclaims. “Any cat, any dog can go to Shuhada Street. But me? I cannot.”

In the wake of the Hebron Protocol, shops were permanently closed in H2, and many Palestinians were driven out of their homes, many of whom “by military order”, Karaki explains.

The harsh living conditions and restricted freedom of living and movement in H2 drove many Palestinians out – turning the bustling city centre into a ghost town.

“We are talking about 1,827 shops closed and 140 apartments empty,” Karaki adds.

There are currently 20 permanent checkpoints inside the city of Hebron, dominating Palestinians’ lives with curfews and indiscriminate closures.

It is now necessary to go through two separate checkpoints just to enter the Ibrahimi mosque.

“When I go to my home every day they check my ID,” Fakhoury says, “I wait 20 minutes behind the checkpoint near the mosque.”

“If you don’t have your ID you are not allowed to get in or to pass through the checkpoint,” Karaki concurs. “We are not humans at all. We are numbers.”

The massacre led to the creation of the Temporary International Presence in Hebron (TIPH), an international organisation meant to monitor the situation in the city and document violations of international law and human rights.

In its 22-year-long presence, TIPH filed more than 40,000 incident reports – many of which Karaki says the Palestinians Authority can take to the International Criminal Court.

But last month, the Israeli administration refused to renew TIPH’s mandate, forcing it out of the city.

Fakhoury, like many Palestinians in the Old City, enjoyed TIPH and felt safe with its monitors’ presence.

“I think it will be difficult now with no one watching the problems,” Fakhoury says. He fears things “will get worse, because the Israeli government doesn’t like to tell people what is happening here”.

There are currently four Israeli settlements inside the city of Hebron – Avraham Avino, Beit Romano, Tel Rumeida, Beit Hadassah – all established well before the 1994 massacre.

But since the expulsion of Palestinian from H2, it has become easier for Israelis to occupy Palestinians homes.

“Usually settlers focus on the empty houses,” Karaki explains. “Where there is an empty house, they occupy it and change it from a Palestinian (home) to a settlement.”

With TIPH gone, Palestinians fear that they will witness an increase in both settlement expansion and settler violence.

“When I go to my home I need to protect myself, protect my home,” Karaki says.

Citing the Fourth Geneva Convention as an example, he says: “On paper, soldiers are here to protect me like they protect settlers. But unfortunately, we see something different.”

Hope for the future?

YAS has stepped in recently to fill in the void left by TIPH. Its activists walk around the Old City most mornings, monitoring settler activity and protecting Palestinian children on their walk to school.

On Friday, YAS organised its 10th annual “Open Shuhada Street” demonstration to denounce the ongoing situation in Hebron – just like every year in the past quarter century. Israeli forces reportedly fired tear gas and rubber-coated steel bullets at demonstrators, injuring at least two Palestinians, including a 13-year-old boy.

But despite the grim circumstances, Karaki says it is important for him as an activist to keep fighting with a purpose.

“Often people are shocked when I say if there is a tomorrow, there is hope,” he says.

But his optimism is dampened by what he and all Palestinians in Hebron have witnessed for years.

“Usually when tomorrow comes, it only gets worse.”

Megan Giovannetti is a freelance journalist based in Jerusalem.