You Are Here: Home → Israel’s 11th Commandment: shoot, then confiscate 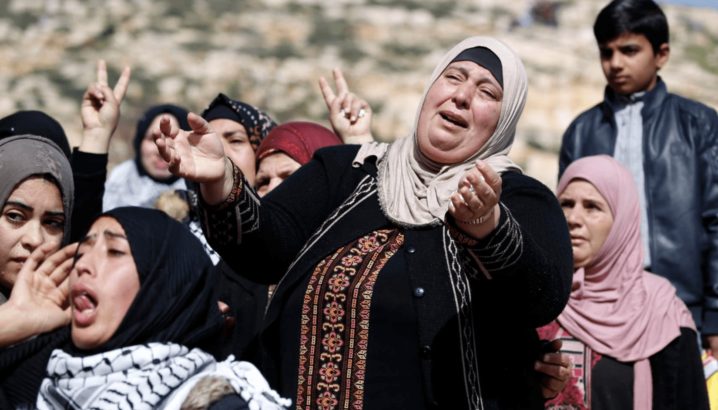 The death of Hamdy Na’asan – shot in the back during a protest against an illegal Israeli outpost – was not an unexpected or isolated event. Since the early 80s, Israel has reported its inability to control settlers.

Amira Hass states, “Land that is hard to steal by means of Israeli laws – the masterpiece of our finest legal scholars – is stolen by means of the settlers’ violent, sacred fire and code of silence.”

Can observant Jews fire a rifle on the holy Shabbat? Of course. That’s the 11th Commandment. It’s also desirable to shoot people in the back and to murder when we’re talking about an Arab whose existence interferes with the commandment “Steal their land so you can live in a villa.”

That is how Hamdy Na’asan from the village of Al Mughayyir was murdered. Those suspected of the murder descended from one of the outposts that sprang from the settlement of Shiloh in the past 20 years. It will be interesting to see how the police will excuse their failure to find the suspect this time, or how the state prosecutor will explain the change in the charge from murder to manslaughter, and then to trampling wildflowers.

In September and November attorney Elias Khoury complained to the IDF legal adviser in Judea and Samaria that the settlers in Shiloh are chasing the residents of the village Qaryut from their land by threatening them with guns, and then taking over the land. The attorney general informed Khoury that the settlers in Shiloh are not subordinate to him. The police, for their part, were unwilling to investigate the issue. Still, a deputy attorney general visited the site and got the impression that yes, there is indeed widespread cultivation in areas beyond the territory allocated to the settlement.

That visit didn’t come at the end of last year, but in 1981. It is one example cited by Yehudit Karp, the visiting deputy attorney general, in her May 1982 report about the helplessness of the establishment in the face of acts of violence by soldiers and settlers against Palestinians in the West Bank. So please, cut the bullshit, stop treating the murder in Al Mughayyir like it was a bolt of lightning that struck us unexpectedly, and the failure to take necessary, immediate steps to investigate it as an exception. After almost 40 years, we can state without hesitation: Intentional neglect has allowed the violence of the settlers to spread and to become increasingly brazen.

The settlers are a beloved and precious tool in the hands of Israeli governments, of the state’s settlement institutions, of real estate contractors, and of wine and goat-cheese lovers. Land that is hard to steal by means of Israeli laws – the masterpiece of our finest legal scholars – is stolen by means of the settlers’ violent, sacred fire and code of silence. All the facts have been spread out before the Israeli public for the past 40 years. The public doesn’t care, because it also benefits and will benefit from the fruits of this violence. If the public cared, thousands – not a few dozen – would join the anti-occupation groups Ta’ayush and Combatants for Peace to protect the land coveted by the cowboys.

Incidentally, regarding Combatants for Peace: In 2011 some of its activists joined the first olive harvest in the village of Jalud, on a plot of land where the violence of the settlers, with the assistance of the army, had blocked their access to the trees for a decade. Persons who were unidentified (of course) rushed from the Esh Kodesh (Sacred Fire) outpost, accompanied by soldiers, and attacked the olive pickers and activists. Even their Israeli identity didn’t help when it came to finding suspects, not to mention prosecuting them.

Qaryut marks the northwestern edge of a cluster of Palestinian villages north of Ramallah. Al Mughayyir is at the southeastern end of this group. A varied landscape of mountains, plains, hills and wadis, field crops, groves of olives and other fruits, and grazing and hiking areas gladden the soul.

Civil Administration diligence, settler violence and the army’s closed-military-zone orders to keep out Palestinians have turned this lovely area into the “Shiloh bloc.” Thus, the space is now Israeli, and within it the threatened villages – reservations of the Indians we have not managed to get rid of. The purpose of the violence of Civil Administration orders and of the settlers, mainly arson and chopping down of trees – excuse me, the violence of the unidentified persons – is the same: To crowd the Indians as much as possible into their reservations, and to take all the land away from them. Let them work at construction in the settlements, their olive oil isn’t profitable anyway.