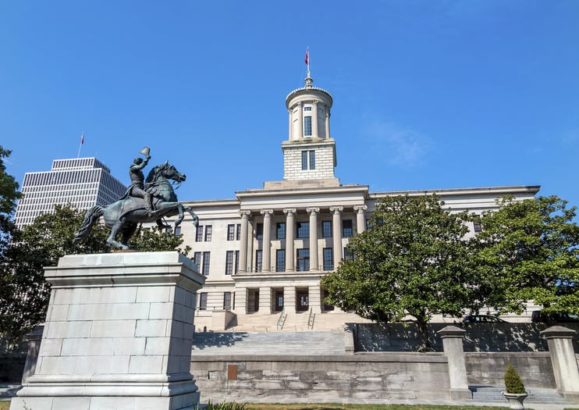 Tennessee State Senator Mark Pody sponsored a resolution reaffirming Tennessee’s friendship with and unequivocal support for Israel. Pody pushed for its passage for “biblical [and other] reasons,” and stated his desire to demonstrate that “Tennessee is friendly toward Jews.” The resolution has now passed both houses.

Pody’s equating of support of Israel with friendliness toward Jews is an example of the inaccurate notion that “anti-Zionism is anti-Semitism” – a comparison designed to shut down criticism of Israel, a nation established in 1948 through a war against the indigenous Muslims and Christians (who were the large majority of the entire population), that is in violation of international laws, and that discriminates against Christians and others.

(NASHVILLE) – A resolution sponsored by State Senator Mark Pody (R-Lebanon) that reaffirms Tennessee’s friendship with Israel and expresses unequivocal support for the nation, unanimously passed the State Senate on Thursday. The resolution also recognizes Israel’s longstanding relationship with the U.S. and notes joint military efforts between the two countries in fighting terrorism.

“I think it’s important that as a state we stand up and reach out to Israel as we have done in the past and express our support for the nation.”

Passage of the resolution follows controversy earlier this week surrounding an anti-Semitic [sic] social media post from U.S. Representative Ilhan Omar (D-MN). [Omar had actually spoken about the power of the Israel lobby in influencing legislation, a point of view that many experts feel is valid.]

In 2015, the General Assembly voted to approve a resolution which condemns the Boycott, Divestment and Sanctions (BDS) movement and increasing anti-Semitism.  The BDS movement, for which Omar has expressed support, encourages companies to boycott Israeli goods and services.

“It is imperative that we must, at every turn, fight anti-Semitism and in all ways possible stand with the Nation of Israel,” said Pody. [It is unclear whether Pody supports Israel’s frequent killing of civilians.]

A signing of the resolution is set to occur on March 7th. Members from the Consulate of Israel will be attending the event as well as celebrities Ricky Skaggs and Irlene Mandrell. Invitations to the signing have also been sent to the Jewish community [the Jewish population of Tennessee is only 0.3% of the state’s population, but there is a strong Israel lobby presence in the state capital].

[The Tennessean reports: “Pody’s resolution doesn’t call for any specific action beyond support, but can carry some weight for the Israeli community in Tennessee, according to La Quita Martin, a state policy advocate for the National Council of Jewish Women.”]

• Israel’s founders were largely not religious; most religious, observant Jews in Palestine itself and around the world opposed Zionism; many still do. For decades most Jewish Americans did not agree with Zionism. Many  Jewish Americans today oppose Israel’s maltreatment of Palestinians.