You Are Here: Home → African refugees in Israel treated like infiltrators 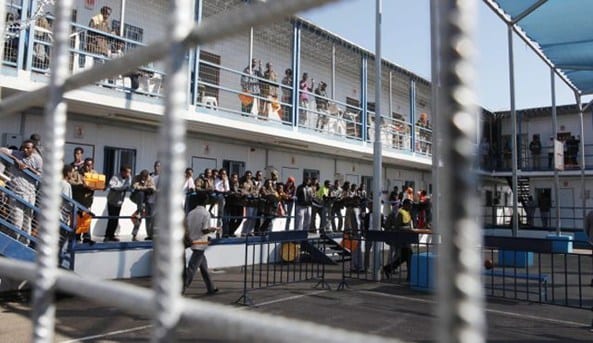 Holot Detention Center, which was closed in March 2018 to free up funds for deporting more people, according to Netanyahu.

Thousands of asylum seekers from Darfur – most of whom have been in Israel for years – still hold visas that treat them like “infiltrators, with insulting sanctions, instead of recognizing them as refugees.” Interior Minister Arye Dery has decided to keep them that way, at least until after the Israeli elections in April.

by Lee Yaron, reposted from Ha’aretz

Interior Minister Arye Dery decided last week not to grant asylum seekers from Darfur a temporary resident’s visa, which would make them eligible for social benefits. Dery’s decision flies in the face of the appeals tribunal, which directed that they be given this status, and the Jerusalem District Court, which recommended that a special policy be formulated for asylum seekers who have been waiting years for a decision on their applications.

Dery said he made the decision, among other reasons, because of the upcoming election, even though such a decision is supported to be based on criteria determined by the United Nations convention on refugees.

Holders of temporary resident visas (5a) can receive medical insurance, social benefits and National Insurance Institute payments. Without it, the Darfur refugees are not eligible for these benefits.

According to Dery’s decision, a copy of which was obtained by Haaretz, Darfuris in Israel will continue to hold the kind of visa that only permits them to reside in the country. “Considering that this is a period of elections and with the proper balance, I did not find it correct to order any change in residency permits of Darfuris,” he wrote.

Dery noted that his decision was made “for the time being, in consideration of the period we are in,” adding that after the Population and Immigration Authority completes its examination of the asylum requests of Darfuris and people from the Nuba Mountains, his decision will be revisited at the end of April. Election Day is April 9.

Some 3,400 asylum requests by people from Darfur, the Nuba Mountains and the Blue Nile region, most of them filed years ago, are still awaiting a decision by the population authority. The authority has so far granted asylum to only one person from Darfur, Mutasim Ali, whose case went through several legal proceedings.

[Editor’s note: Israel’s Population and Immigration Authority estimated in 2018 that 38,000 Eritrean and Sudanese asylum seekers, most of whom have been present in Israel since at least 2012 and live in detention centers or slums. The ministry planned a two-year program, starting in March 2018, to identify and expel them. Human Rights Watch points out, “[Israel has] recognized fewer than 1% of asylum applicants as refugees, compared with acceptance rates in the EU of 90% for Eritreans and 60% for Sudanese.”]

In December 2017, the appeals tribunal issued its ruling on a petition submitted by HIAS Israel, the international Jewish organization that assists refugees and operates a legal aid program in Israel. HIAS asked the court to instruct the authorities to issue temporary resident’s visas to 13 asylum seekers who have been waiting between four and 11 years for disposition of their applications. Other verdicts were handed down in the cases of dozens of asylum seekers from Darfur.

The state appealed the ruling and in November, Jerusalem District Court Judge Arnon Darel accepted the appeal. However, Darel criticized the Interior Ministry and recommended that Dery re-examine how to treat the cases of individual asylum seekers, “in a manner that provides a response to the non-decision for years.” Darel also raised the question of whether a gradually upgraded visa could be issued that would address the issue of employment for asylum seekers.

Darel recognized that the long wait caused a “justifiably grievance,” noting that the permit itself shows that it does not allow its holders to work and that asylum seekers are not eligible for social benefits and health insurance, and are required to deduct a large percentage of their salary, which they get back only when they leave the country. In light of this, the judge wrote, “It may be easily understood why the appeals tribunal ruled that an interim visa be given to the respondents.” Although the judge reversed the order by the appeals tribunal, he instructed Dery to examine within 45 days “how the respondents should be treated in the interim period until a decision is made on the individual asylum applications filed.”

According to HIAS deputy director Nimrod Avigal, the Darfuri asylum seekers have held a visa that treats them like “infiltrators, with insulting sanctions, instead of recognizing them as refugees. Many of them were jailed when they entered the country and later transferred to the Holot detention center.”

Noting their lack of basic rights, Avigal said: “This is not the way to treat asylum seekers. The tribunal ruled that all the excuses for not granting them status have run out, and gave them temporary status until their case is resolved.” Dery, Avigal said, had decided for political reasons to “leave the asylum seekers to their ongoing suffering without a decision on their applications and without rights.”

HIAS has petitioned the Supreme Court against the Jerusalem District Court’s ruling, asking that it be vacated and the ruling of the appeals tribunal accepted. The state responded that the decision should be left up to the interior minister, and that to do otherwise constituted improper intervention in the authority of the interior minister to decide immigration policy.