You Are Here: Home → Meet Netanyahu’s new allies, followers of an FBI-designated terrorist 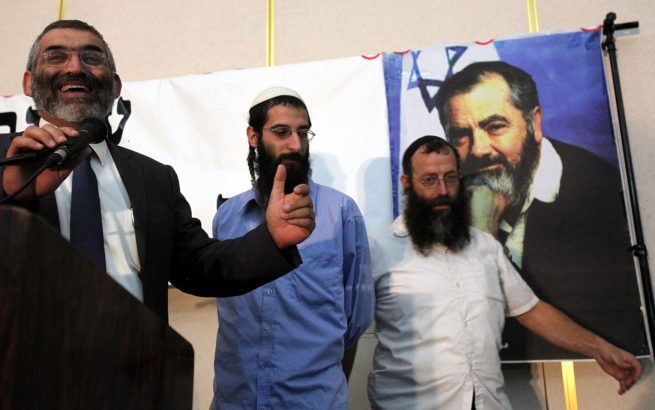 Israel’s Prime Minister is affiliating with an extremist political party named “Jewish Power” with ties to terrorism… one JP leader referred to Christians as “bloodsucking vampires” & declared that Christmas should be outlawed… another has a police record of assaulting both Palestinians and Israelis… … another has a client list that reads like a ‘Who’s Who’ of suspects in terror cases and hate crimes… Meanwhile, the U.S. gives Israel over $10 million per day, and Congress is poised to give it even more.

Israeli Prime Minister Benjamin Netanyahu, who is quick to call out alleged anti-Semitism, is teaming up with an openly racist political party with a deeply problematic background, in hopes of snagging the next election.

Netanyahu’s newest partner, the fanatic political party Otzma Yehudit, or “Jewish Power” party, would be a part of his next coalition government, bringing with it a stunning history of bigotry and violence.

Leaders of Jewish Power are disciples of the late Rabbi Meir Kahane, whose bio includes extremist activities in both the United States and Israel.

FBI labeled the Godfather of “Jewish Power” a terrorist

in New York, Kahane founded the Jewish Defense League, which even the pro-Israel Anti-Defamation League (ADL) labeled as racist, violent, and extremist, and which the FBI designated a terrorist organization. He was convicted for conspiracy to manufacture explosives and received a five-year suspended sentence.

In Israel, Kahane co-founded and won a Knesset seat with the political party Kach. Though the party became increasingly popular in the following years, the Israeli government banned Kach due to its “racist” and “anti-democratic” platform, which the New York Times reported “advocates forcible expulsion of all 2.2 million Arabs from Israel and its occupied territories.” (See this video from Ha’aretz for examples of Jewish Power’s platform.)

Israel identified the Kach party as a terrorist organization in 1994 after Baruch Goldstein, a party member, massacred 29 Muslims as they prayed in Hebron.

This – Jewish Power – is the party with which Netanyahu’s Likud party has now partnered (in a complete reversal of the 1990s, when it had opposed  Kach).

Netanyahu is reported to have signed an agreement promising Jewish Power two ministerial posts and two seats in the Security Cabinet.

Below are some of Jewish Power’s top leaders.

Benzi Gopstein, a leader in Jewish Power, runs Lehava, an Israeli organization that works aggressively against intermarriage, business relationships, or any mixing between Jews and Christians and Muslims. He is reported to have told a Lahava meeting that Palestinians were a “dangerous cancer” that “has metastasized everywhere.”

Gopstein has referred to Christians as “bloodsucking vampires” – which earned him a censure from the ADL – and declared that Christmas should be outlawed.

Baruch Marzel was reported to have a long police record before he turned 30, including assaulting Palestinians and Israelis.

He has advocated violence toward homosexuals, going so far as to call for a “religious war” against them, and organizes a celebration at Goldstein’s grave every year.

Another top Jewish Power leader is attorney Itamar Ben-Gvir, who displays a picture of Baruch Goldstein (see above) in his living room. and whom the Israeli newspaper Ha’aretz once described as the “go-to man for Jewish extremists who have allegedly run afoul of the law….[whose] client list reads like a ‘Who’s Who’ of suspects in Jewish terror cases and hate crimes in Israel.” He has been retained by members of the “hilltop youth,” an extreme settlers group too right-wing even for most Israelis. Ben-Gvir calls these settlers the “salt of the earth” and “the biggest Zionists that exist.”

One more notable leader in the Jewish Power party is Michael Ben-Ari – whom the US has labelled a member of a terrorist party. He still considers himself a follower of Meir Kahane.

As a Knesset member, he has worked to call attention to the increased “infiltration” of Sudanese refugees, and blamed them for a rise in crime.

Ben-Ari has also publicly burned a Palestinian flag in response to the United Nations’ passage of resolution 67/19, which upgraded the status of Palestine to that of nonmember observer state.

In an interview last week, Jewish Power party leader Michael Ben Ari was asked if he would disavow Kahane’s ideology. The Times of Israel reports that Ben Ari “ridiculed the notion. Kahane, he said, was his teacher, his rabbi.”

As the Intercept reports, times have changed dramatically since Rabbi Kahane was in the Knesset:

Before he was assassinated in 1990, Kahane served in the Israeli Parliament, the Knesset, where he introduced legislation to strip non-Jews of their citizenship and called for the ethnic cleansing of Palestinians from the occupied territories. “At the time,” Barak Ravid of Israel’s Channel 13 news noted, “senior members of the Likud attacked Kahane’s policies and said they were similar to the Nuremberg Laws passed by the Nazis before the Holocaust.” When Kahane spoke, the other members of the Knesset, including the Likud party Netanyahu now leads, would boycott him by walking out of the chamber.

This new coalition, with Likud head Netanyahu at the center, was described by Israeli journalist Barak Ravid as the political equivalent of “a U.S. president cutting a political deal with a leader of the KKK.”