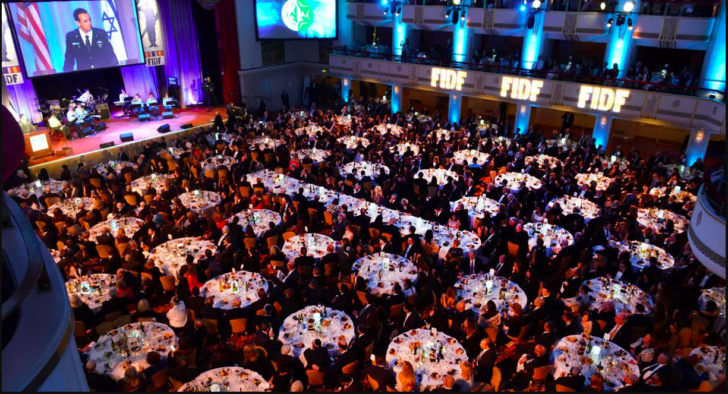 A Friends of Israel Defense Forces gala in 2015. [Photo by Shachar Azran]

The umbrella body of over 50 mainstream American Jewish organizations chose Stark for its new head. The Conference works to “advance the U.S.-Israel special relationship” and “bolster Israel’s security and prosperity.” Stark’s sons served in the Israeli army instead of in the U.S. military. Numerous past chairs have been active in American politics and donated to the campaign funds of Israeli politicians.

Arthur Stark was unanimously elected as chairman of the Conference of Presidents of Major American Jewish Organizations on Monday. The U.S. businessman has close ties to the family of Jared Kushner and also heads the Friends of the Israel Defense Forces – which has previously received large donations from key supporters of both U.S. President Donald Trump and Israeli Prime Minister Benjamin Netanyahu.

According to the organization, Stark was born in Budapest to Holocaust survivor parents, who escaped from Hungary during the 1956 uprising and emigrated to the United States. His wife, Sylvia, emigrated to America from Morocco in 1967. They have four children, and both their sons served in the Israeli army.

Stark is also president of the home furnishings retailer Bed Bath & Beyond, which he first joined in 1977.

Stark’s “depth of knowledge, level of commitment and outstanding judgment regarding matters of importance to the American Jewish community, Israel and the Jewish people make him the ideal choice for this critical leadership position,” said former Conference Chairman Robert Sugarman.

Greenberg, meanwhile, said Stark has “demonstrated great skill in leading the growth of a complex national Jewish organization, has extensive experience in dealing with international issues, and his deep love and concern for Israel and the Jewish people, shared by the diverse constituency of the Conference, will be a source of great strength for the Conference.”

Strong relationships in Washington and Jerusalem are always helpful to the leader of the umbrella organization, which was founded in 1956 to serve as a united voice representing American Jews and their panoply of organizations to the executive branch.

One of the Conference’s stated aims is to “advance the U.S.-Israel special relationship, bolster Israel’s security and prosperity, and promote prospects for true and lasting peace in the Middle East.”

Numerous past chairmen of the Conference have been active in American politics and donated to the campaign funds of Israeli politicians.

Stark, 63, lives in Livingston, New Jersey, the same town where Jared Kushner grew up and where his family owned a home. The Kushner family – including Jared’s father, Charles Kushner – have been longtime supporters of FIDF. The New York-based nonprofit raises millions each year to support a wide array of educational and social programs that benefit Israeli soldiers and their families.