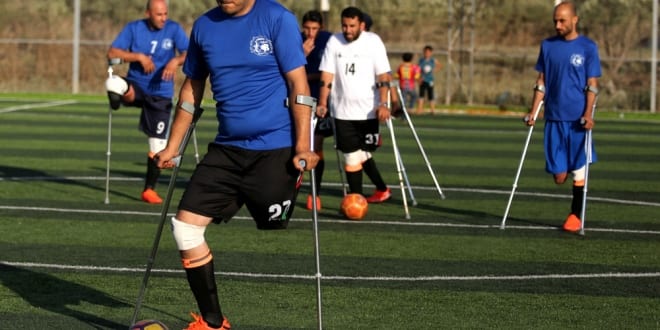 Americans call it “soccer,” but the whole world can call it “inspiring.” Some of Gaza’s 2,500 lower-limb amputees have created a team, and they have their sights set on the World Championship.

The idea of forming a Palestinian football team of amputees in the Gaza Strip came to the mind of Fouad Abu Ghalyoun, Chairman of Palestine Football Association for amputees, when he watched a football match held between England and Turkey in 2017; the players of the two teams were all amputees.

“After I watched the match, I seriously thought about it, especially, we have many amputees in the Gaza Strip that lost their legs during the wars and conflict with Israel,” Abu Ghalyoon said, adding “I presented the idea to many friends, who encouraged me to form our first ever team in central Gaza Strip city of Deir el-Belah. ”

After the football team of amputees was formed on March 30, four months ago, Deir el-Belah Association for Handicapped donated to the team sports wear, crutches and shoes. Abu Ghalyoon said the team of football amputees is still lacking professional crutches and need special training.

A playground that is cultivated with grass and belongs to Deir el-Belah municipality was devoted for training the team’s members. The football team that all its members are aged between 13 and 42 years old have either their right or left leg amputated due to being injured during the past three wars Israel waged on the Gaza Strip since 2008.

Khaled al-Mabhouh, the team’s coach said that his team consists of 13 players and all have their lower limbs amputated, adding that each one of the players has his own position in the playground and each is using two crutches to move and run in the playground.

“The dream became true when my team’s members began their first football rehearsal on March 30 (The Land Day) after contacting the players who were very much enthusiastic to train and play in the team,” said al-Mabhouh, adding “training players with one leg is not so easy and needs special kind of exercises.”

Al-Mabhouh, who trains 17 football players, with one leg only, said that the process of training the players with one leg “is so difficult,” adding “But I feel that the players have a very strong determination to carry on playing. They were shy in the beginning, but I managed to get them out of this feeling.”

Gaza Health Ministry said in a statement that since the start of rallies and protests, better called as the “Great Marches of Return” and Defying the Israeli Blockade which started on March 30, around 60 Palestinians had their lower limbs amputated after they had been shot in their legs by Israeli soldiers’ gunfire.

Al-Mabhouh said that he has ambitions to form four football teams of amputees in four different areas in the Gaza Strip, adding one has been already formed for central Gaza Strip, one will formed in Khan Younis, one in Rafah, one in Gaza City, and one in northern Gaza Strip.

“We called on many institutions and associations to support and help us. We are still using non-professional tools and equipment in carrying out our exercises,” said the coach of them team, adding “We are still using crutches that don’t fit at all for the amputees.”

Ibrahim Khattab, a 14-year-old teenager who has his foot amputated said “”I am now playing football, which I was deprived of after my foot was amputated in 2014 when I was injured by a rocket fired from an Israeli reconnaissance plane. Today I joined this team and my father encouraged me to do so.”

He stressed that his determination to play football, despite amputation, presented for him a challenge, steadfastness, will and love of life.

Hassan Abu Ikrayem, who has his leg amputated in 2007, was assigned the task of protecting the right side of the pitch, to repel any attack from the opposing team.

“After my injury that caused my foot amputation in 2007, I stopped playing football completely. This has affected my mood so much that I was constantly playing before I got injured. Before I joined this team, it was the first time I had played my favorite hobby for several years,” said Ikrayem.

The football team of amputees is conducting one day a week exercise and training is only for half an hour, then the team divides into two teams and they play two halves, each match is ten minutes.

Wahid Rabah tries to run quickly over the green grass of the Deir Al Balah Club in the central Gaza Strip, leaning on his crutches to catch the ball and score a goal against his opponent as part of his training with the “Champions” team of the amputated limbs players.

For Rabah, joining the team, changed his mental state, and gave him vitality after he lost his right leg during an Israeli army incursion into the Maghazi refugee camp in the central Gaza Strip in 2006.

A number of wounded Palestinians in the Gaza Strip formed the first football team for amputees. “When I was offered to participate in the team, I was very encouraged, because it is a new idea and a sport that is unfamiliar to us, and it is a creative idea,” said Rabah, a father of two children.

Since 2007, Israel waged three large-scale wars on the Gaza Strip; the longest was in the summer of 2014. Official figures of the Palestinian health ministry showed that thousands of Palestinians had lost their either lower or upper limbs.