You Are Here: Home → Israeli Army Self-Investigates: No Violations During Gaza Border Protests (excerpts and commentary) 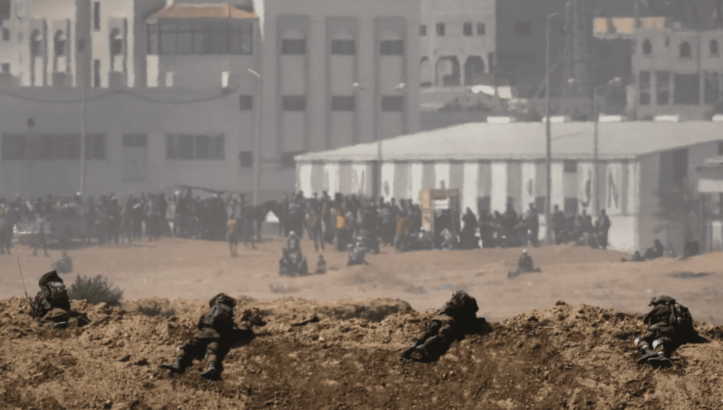 Smoke rises as Israeli soldiers are seen on the Israeli side of the border with the Gaza Strip, Israel, May 14, 2018. Credit: AMIR COHEN/ REUTERS

Surprise! Self-scrutiny by Israel’s “world’s most moral army” reveals: Gazan demonstrators were shot as a result of ‘operational mishaps’ and not intentionally targeted.

Israel continues to be blissfully unaware of its own violent misdeeds, as Ha’aretz reports:

An internal Israeli army investigation into the deaths of 153 Palestinians during protests along the Gaza-Israel border is expected to find that none of the incidents involved violations of open-fire orders and therefore there are no grounds for referring any of the cases to the Military Police for further investigation. Demonstrators killed by army fire were not intentionally targeted, but died as a result of “operational mishaps,” according to the team of investigators, headed by Israel Defense Forces Brig. Gen. Moti Baruch.

This is reminiscent of Operation Cast Lead, in which 1,400 Palestinians and 13 Israelis were killed.

The Goldstone Report, commissioned by the UN Human Rights Council and headed by the well-known Jewish, Zionist judge from South Africa Richard Goldstone, found evidence of Israeli war crimes and crimes against humanity. These included the blockade of Gaza, targeting of civilians, use of white phosphorus, and more. Israel insisted that the report was anti-Semitic and denounced it.

Israel conducted its own internal investigation, which showed that “the world’s most moral army” had indeed lived up to its name: 1 soldier was convicted of stealing a credit card, 2 were charged with using a child as a human shield, and 1 was convicted of illegal use of a weapon.

The team found that in each incident weapons fire was carried out in accordance with open-fire orders and none of the Israeli army sharpshooters had deliberately targeted uninvolved Palestinian bystanders. The panel noted several reasons for what they termed “operational mishaps” that resulted in the deaths of innocent people, including cases in which bullets had hit border fence installations or the ground, cases in which demonstrators intruded into the line of fire after troops had opened fire and incidents in which bullets ricocheted, subsequently hitting Palestinians. In the course of the investigation, the Israeli army raised the height of some of its sniper positions to minimize the risk of hitting Palestinians unintentionally.

This explanation does not square with many of the videos and eyewitness descriptions of shootings, including direct hits of people running away from the border or praying, people helping the injured, medics in clearly marked vests and with their hands up, and people standing near the protest, as well as at least one video shot by a sniper.

The bigger picture, however, is the fact that Israel is defending against unarmed demonstrators, using snipers, to stop a protest against a blockade that is illegal and immoral.

Supporters of human rights need to speak up against, not only Israeli violence at the border and the blockade, but also Israel’s ludicrous pronouncement of its own innocence.