You Are Here: Home → Dr. Henry Kissinger: The Myth of the Great Statesman

Dr. Henry Kissinger: The Myth of the Great Statesman 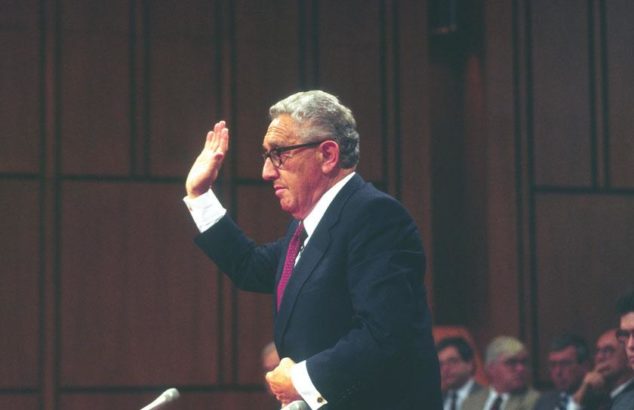 Former U.S. Secretary of State Henry Kissinger is sworn-in to testify before the U.S. Senate Select Committee on POW/MIA Affairs, in Washington, DC, on Sept. 22, 1992.

Walter Hixson reviews a book about former Secretary of State Henry Kissinger, and comments on his failure to understand issues in the Middle East or to do anything to further justice in the region. He “nurtured utter contempt for justice, human rights and peace.”

Kissinger was also responsible for the disastrous Arab oil embargo, initiated the billions of US tax dollars to Israel, and received the Theodor Herzl award…

AMONG MANY widely embraced illusions about the history of the Middle East and American diplomacy in general is that Dr. Henry A. Kissinger is or ever was a brilliant statesman.

What Kissinger has always been, and remains at age 98, is a brilliant self-promoter. His more than 3,000 pages of self-aggrandizing published memoirs—a record unmatched in the annals of American diplomacy—reflect an ego trip befitting a man famous for his “shuttle diplomacy.”

Millions of Americans have been taken in by Kissinger’s Harvard credentials, his deft manipulation of the news media and his gravelly Old World-accent that supposedly resonates the wisdom of the ages. The latest of Kissinger’s easily duped admirers is the Israeli apologist Martin Indyk, the author of the recent book Master of the Game: Henry Kissinger and the Art of Middle East Diplomacy.

In this astonishingly shallow book, as well as a recent webinar sponsored by the Middle East Institute, Indyk lauds Kissinger for his step-by-step approach to Middle East diplomacy, which he credits with giving rise to the Oslo “peace process.” The Oslo framework—a fraud that has enabled the ongoing and illegal settler occupation of Palestine—has been thoroughly discredited, yet Indyk argues with a straight face that it offers the only viable path to peace.

None of this is a surprise, as Indyk, a former U.S. ambassador to Israel, has long been a member in good standing of the Israel lobby and a cheerleader for Zionist state aggression and the repression of Palestinians. One can expect nothing less—he was first executive director of AIPAC’s think tank, the Washington Institute for Near East Policy (WINEP).

Even Indyk admits that when Kissinger entered the Nixon White House, he was a Eurocentric “Orientalist” who “didn’t know anything about the Arab world by his own admission.” On the other hand, Kissinger was a dedicated Zionist, which had led him to visit Israel six times prior to his executive appointment. Kissinger—like Indyk and a series of U.S. diplomats, from Dennis Ross to Secretary of State Antony Blinken today—sided unequivocally with Israel and against justice for Palestinians.

Indyk showers credit on Kissinger for bailing out Israel in the October 1973 war and for his subsequent much glorified shuttle diplomacy, while glossing over the fact that Kissinger had sabotaged Secretary of State William Rogers’ peace plan based on U.N. Resolution 242, in the aftermath of the June 1967 war. By pushing Rogers aside, the ever-opportunistic Kissinger took over his job in the Nixon and later Ford White Houses.

Indyk chides Kissinger for not pursuing a “Jordanian solution” to the Palestine conflict, but Kissinger had no interest in Palestine, which, as he explained in 1974, was “not an American interest, because we don’t care if Israel keeps the West Bank if it can get away with it. So, we won’t push it.” Here we see the real Kissinger—utterly disdainful of the U.N., the Palestinian quest for peace, justice and human rights, just as he disdained the cause of other dark-skinned peoples across the world, including millions of Asians, Latin Americans and Africans.

In 1975, Kissinger expressed regret albeit privately, explaining, “I am sorry that I did not support the Rogers effort” to forge a peace accord. He acknowledged that a diplomatic agreement with Egypt could have been negotiated that “would have prevented the 1973 war.” Kissinger thus admitted that his ignorance and disdain for the Arab and Palestinian position had precluded a peace accord and brought on a major war. Failing to prevent war and further militarizing the Middle East conflict were the hallmarks of Kissinger’s failed statesmanship.

Both Richard Nixon and Gerald Ford made sporadic attempts to act as honest brokers in the Middle East, occurrences that left Kissinger caught between the administrations and Israel. When Israel and the lobby publicly criticized Kissinger amid a dispute over military resupply during the short-lived Ford administration, Kissinger in a “crying voice” prostrated himself before the Israeli ambassador to the United States, Simcha Dinitz, pleading that he “was a Jew before I was an American and now you are making me the scapegoat.”

He added—in a vivid example of the extent of Israeli influence over American diplomacy—“I showed you messages, telegrams and wires from the Soviet Union and Egypt,” only to be criticized publicly in return.

In addition to his bungling Middle East diplomacy, Kissinger infamously green-lighted the undermining of Chilean, Argentinian and other Latin American democracies; bolstered apartheid in southern Africa; signed off on a murderous Indonesian assault on East Timor; and gave a thumbs up to Pakistan’s genocidal attack on Bangladesh.

Even the much ballyhooed and long overdue détente with Russia and China, for which Kissinger has claimed enormous credit, stemmed from a misguided hope that the great powers could compel the North Vietnamese to grant the United States “peace with honor” amid the massive, failed Indochina intervention. Nixon and Kissinger prolonged the Vietnam War for four years, achieving nothing but a wider degree of death and destruction in the process.

Upon his death, Kissinger no doubt will be lauded, his mythical overseas accomplishments celebrated for days on end. But beneath the veneer of statesmanship the actual historical record reveals the true Kissinger: a deeply flawed diplomat who nurtured utter contempt for justice, human rights and peace. (Even Indyk admitted Kissinger had “quite a jaundiced view of peace,” but so does Indyk, so that wasn’t a big problem for him.)

So, Henry, when the time comes, may you rest in peace—despite the utter disregard you showed for it throughout your life.

[Editor’s note: Kissinger bore the major responsibility for the devastating 1973 Arab oil embargo. Kissinger later admitted he had “made a mistake.” Author Donald Neff, however, wrote: “Skeptics might wonder whether it was a mistake, or wanton disregard of U.S. interests during a passionate effort to help Israel.”

Kissinger was also responsible for initiating the US policy of giving Israel $3 billion per year, as British Middle East expert Patrick Seale reported in 2003:

Kissinger adopted as America‘s own the main theses of Israeli policy: that Israel had to be stronger than any possible combination of Arab states; that the Arabs‘ aspiration to recover territories lost in 1967 was “unrealistic”; that the PLO should never be considered a peace partner. His step-by-step machinations after the October war of 1973 were directed at removing Egypt from the Arab lineup, exposing Palestinians and other Arabs to the full brunt of Israeli military power. Ariel Sharon‘s invasion of Lebanon in 1982—in which some 17,000 Palestinians and Lebanese were killed, triggering the birth of the Hezbollah resistance movement—was a direct consequence of Kissinger‘s scheming. In 1970 Israel received $30 million in US aid; in 1971, after the Jordan crisis, the aid rose to $545 million. During the October war Kissinger called for a $3 billion aid bill, and it has remained in the several billions ever since.

In 2016, Kissinger received the ‘Theodor Herzl Award’ from the World Jewish Congress. He was presented with the award by US journalist Barbara Walters. More information here. ]

History’s Shadows, a regular column by contributing editor Walter L. Hixson, seeks to place various aspects of Middle East politics and diplomacy in historical perspective. Hixson is the author of Architects of Repression: How Israel and Its Lobby Put Racism, Violence and Injustice at the Center of US Middle East Policy and Israel’s Armor: The Israel Lobby and the First Generation of the Palestine Conflict (available from Middle East Books and More), along with several other books and journal articles. He has been a professor of history for 36 years, achieving the rank of distinguished professor.