You Are Here: Home → ‘Blinding the truth’: Israeli snipers target Gaza protesters in the eyes 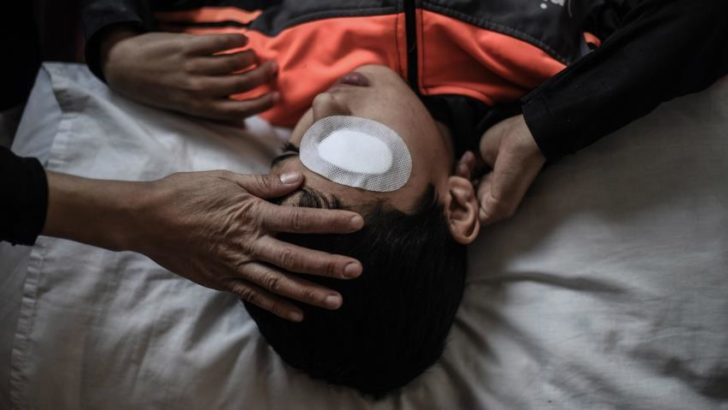 Eyes are a ‘common target’ of Israeli snipers at Gaza’s Great March of Return. To date, Gaza’s Ministry of Health reports that Israeli soldiers have shot 50 men, women, and children in the eye since the weekly demonstrations began last March, leaving many permanently blind.

by Tareq Hajjaj and Pam Bailey, reposted from TheNewArab

However, Amarneh was far from unique; Israeli snipers targeting participants in Gaza’s weekly Great Return March protests have aimed for the legs – and eyes. To date, Gaza’s Ministry of Health reports that 50 protesters have been shot in the eye since the demonstrations began March 30, 2018 – leaving them permanently blind.

“Some of these protesters and journalists were hit in the eye with teargas canisters, but most were targeted directly with what is commonly called a ‘rubber bullet,’ giving the impression they are somehow benign,” says Ashraf Alqedra, MD, a treating physician at Gaza City’s al-Shifa Hospital and spokesperson for the Ministry of Health.

“But there is still steel at the core, and although these bullets don’t usually kill, they do grave damage. It is impossible to save an eye hit directly by a rubber-coated steel bullet.”

However, he adds, due to the Israeli blockade, there are no artificial, glass eyes in Gaza – only a cosmetic improvement, but one that can be a significant psychological aid. These are available only by travelling out of Gaza for treatment and permits for such journeys are often not granted.

Mai Abu Rwedah, 20, grew up in north Gaza’s al-Bureij Refugee Camp in a family of nine children supported by a father who works as a janitor for a UN school. She just graduated from university, hoping to start her professional life as a medical secretary and contribute her income.

But that dream was dealt a severe blow December 6, when she became the most recent Gazan to lose an eye to an Israeli bullet.

Abu Rwedah believes in using peaceful, but active, resistance to reclaim Palestinians’ right to return to their ancestral homeland. So, she has joined participants in the Great Return March protest since its launch on March 30, 2018.

On September 21 of that year, she was shot by a rubber-coated bullet in one of her legs, but that didn’t stop her from participating; she kept on going.

Earlier this month, stood with a few friends about 100 metres from the fence that marks the border between Gaza and Israel. She glimpsed an Israeli soldier waving and pointing his finger to his eye.

“He was trying to intimidate me, but I was not afraid because I was doing nothing wrong. I wasn’t even throwing stones,” Abu Rwedeh recalls.

The soldiers fired tear gas then, and Mai and her friends ran away, but still were in sight of the young man who had threatened her.

“He was watching me; wherever I moved he kept watching. Then, suddenly, he raised his gun and pointed it at me. I was about to flee but he was too fast. He shot me in my eye.”

The bullet damaged her jaw as well. Doctors had to extract her right eye, since it was destroyed, Her determination, however, is intact. Abu Rwedeh continues to protest.

Mohammed Al-Najar, 12, is the second-oldest son among four children, supported by a father who works in a wedding hall in Khan Younis.

In January, during the mid-year vacation from school, Mohammed begged his parents to allow him to watch the Friday protest with his cousins and other relatives, thinking it would give him an exciting story to share with classmates.

He was given permission to ride one of the government buses that collected people from the various neighbourhoods, taking them to the protest sites. When he disembarked, teargas bombs were flying, and he shouted to warn those around him. Then next one hit him directly in his right eye.

When Mohammad learned later that his eye could not be saved, he locked himself in his room and stopped going to school. When he did go back, he struggled.

“At first his marks at school dropped and he isolated himself. He tried to hide his missing eye,” says his mother, Um Edress.

She took to him an organisation that provided psychotherapy, but he refused to speak. Today, he is socialising, but goes quiet when asked about his injury.

According to Dr Alqedra, most people with eye injuries from the Great Return March are journalists or photographers.

One of them is Sami Musran 35, a photographer who works for Al-Aqsa TV. On July 19, he was shot several times – first in his hand, the next two times in his shoulders and the fourth time in the chest. (Fortunately, he was wearing a bulletproof vest, so it did not harm him.) The last time cost him his left eye.

“Forty times, my Facebook account was hacked or deleted for me, and I received death threats as well,” he says. “But I decided to keep on with my work to reveal the Israeli crimes against unarmed Palestinians who participate in the march.”

“Minutes before I was hit, my mother called me twice, saying she was very worried about me. But I said that nothing happens that isn’t God’s plan,” he recalls.

He was about 250 metres away from of the Israeli fence when two women and a child were shot. Musran was taking photos of them and went in close. That’s when a rubber-coated bullet hit his eye and he lost consciousness. Two days later, he woke up in the intensive care unit to find out he had a skull fracture and an injured eye. The bullet had damaged the iris, retina and cornea and his vision was gone.

Today, it is hard for him to continue with his job; his depth perception is off, he gets headaches and the sight in his remaining eye “fades” at night. But he will keep trying.

“Israel wants to blind the eyes of the truth by sending messages to photographers saying we will hit your eyes to make you stop taking photos,” he says. “But we do not surrender.”

Tareq Hajjaj is an author and a member of Palestinian Writers Union. He studied English Literature at Al-Azhar university in Gaza. He started his career in journalism in 2015 working as news writer/translator at local newspaper Donia al-Watan, then writing in both Arabic and English for international outlets such as Elbadi, MEE, and Al Monitor. Now he’s writing for We Are Not Numbers.

Pam Bailey is a freelance writer and social-justice activist based in Washington, DC, who lived and worked in the Gaza Strip immediately following the 2008/9 Israeli assault. She also traveled to Yemen and Pakistan to interview people impacted by imperialist drone surveillance and warfare. Her writings can be found on sites such as Truthout, Alternet, Mondoweiss, Middle East Eye and Al Jazeera.