You Are Here: Home → Arab Lawmaker Suspended From Knesset for Week After Calling Israeli Soldiers ‘Murderers’ 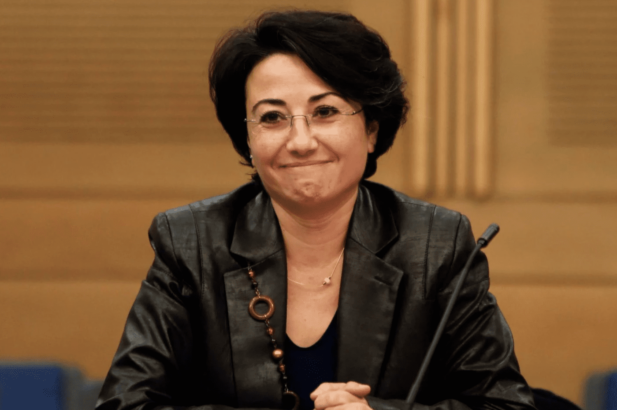 The Knesset Ethics Committee removed MK Haneen Zoabi from the Knesset plenum and committees for a week Wednesday, for calling Israeli soldiers “murderers.”

Zoabi told the committee her statement was “part of the most basic freedom of expression and nobody has the right to silence others for opinions they find inconvenient. I spoke the truth.” She also offered to give the committee a list of instances in which Palestinians were murdered by Israeli soldiers. Zoabi, of the mainly Arab Joint List, will be barred from the Knesset during the first week of the summer session.

The complaint against Zoabi was submitted by MK Oren Hazan (Likud), who was himself recently suspended from the Knesset for six months.

The complaint followed Zoabi’s statement last month, at a discussion on the bill prohibiting representatives of organizations that act against the army from lecturing in schools. She said, “the army also murders from time to time, not every day. … Haven’t you heard of Palestinian youths being murdered?… Who [is it that] murders the Palestinians in the occupied territories?”

The Ethics Committee members said in its decision that this wasn’t the first time Zoabi violated the Knesset’s code of ethic. “Using the expression ‘murderers’ in relation to soldiers acting in the state’s name, is unworthy of the broad protection the committee extends to MKs’ political freedom of expression and is a violation of the rule that ‘an MK will act in a way appropriate to his status as an MK and act to foster the public’s confidence in the Knesset.’”

Zoabi said in response that “the committee redefines its role from Ethics Committee to Censorship Committee. I didn’t know I needed a permit from the MKs for what terminology to use, what to say and what not to say and what values I may or may not defend. Is my duty to tone down the Israeli army’s war crimes, or to cry out against these crimes and say murder is murder? The Ethics Committee forces us to lie and cover up crimes. It would be better without such ethics.”