You Are Here: Home → 240 Israelis and Jews urge Germany not to enforce anti-Boycott law 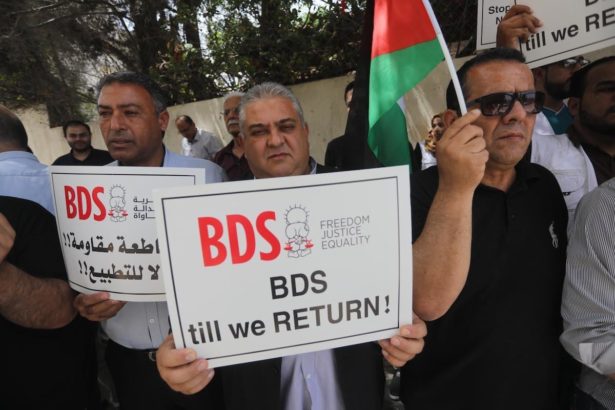 A significant number of Israeli and Jewish intellectuals publicly denounced Germany’s “deceitful” anti-BDS bill, the first of its kind in Europe.

[Nathan Thrall summarizes the birth and goals of BDS:

The Boycott, Divestment and Sanctions movement was founded with a statement of principles, known as the BDS call, on 9 July 2005. It represented something of a last resort. The Palestinians had been crushed by the military defeat of the second intifada. The living embodiment of the Palestinian national movement, Yasser Arafat, was dead. His newly installed replacement, Mahmoud Abbas…[was not likely] to bring occupation to an end. If there was going to be pressure on Israel to give Palestinians freedom, it was going to have to come from the grassroots and the outside.

The BDS call was made on the one-year anniversary of a historic advisory opinion by the international court of justice. The court ruled that Israel’s separation barrier was illegal, that Israel had to dismantle it “forthwith” and offer reparations to those it had harmed, and that every signatory to the fourth Geneva convention – meaning nearly every state in the world – was under an obligation to ensure Israel complied with international humanitarian law…“If there had been action on the part of the international community to implement the ICJ ruling,” Ingrid Jaradat, a founding member of the BDS campaign, told me, “there wouldn’t have been a BDS call.”

More than 170 Palestinian organisations from the occupied territories, Israel and the diaspora endorsed the BDS call…Twenty-nine of these entities now form the BDS National Committee, or BNC, a leadership council…

[The BDS campaign has] three clear demands, with one for each major component of the Palestinian people. First, freedom for the residents of the occupied territories; second, equality for the Palestinian citizens of Israel; and third, justice for Palestinian refugees in the diaspora – the largest group – including the right to return to their homes.]

Some 240 Israeli and Jewish academics and intellectuals have sent a letter to the Germany government urging it not to enact in to law a bill that would define the Boycott, Divestment, and Sanctions (BDS) movement as “anti-Semitic”.

If it is passed in to law, the currently non-binding motion, which was passed by the Bundestag – parliament – in May, would be the first official law in Europe to classify BDS activity as anti-Semitic.

Despite winning huge support among vast sections of the major parties, including the Social Democrats, the Free Democratic Party, and Chancellor Angela Merkel’s Christian Democratic Union, the law has also drawn a significant amount of criticism and condemnation.

Some 240 Israeli and Jewish academics and intellectuals have sent a letter to the German government urging it to oppose the motion and “not to endorse” it, due to it being “based on the false allegation that BDS as such equals anti-Semitism.”

The letter, which was published in both English and German on BDS Germany’s website, stated that

we all reject the deceitful allegation that BDS as such is anti-Semitic and maintain that boycotts are a legitimate and non-violent tool of resistance.

They also called on the German government

to maintain its direct and indirect funding of Israeli and Palestinian non-governmental organizations that peacefully challenge the Israeli occupation.

The opposition did not come without a backlash, however. In response, CEO of the Zionist NGO Im Tirtzu, Matan Peleg, slammed the signatories and accused them of “hypocrisy and ungratefulness”, stating that they “earn their living at the expense of the Israeli taxpayer yet at the same time work to boycott and slander them.”

The BDS movement, which works to discourage the purchasing of products manufactured, grown and exploited from the occupied Palestinian territories, has faced widespread global opposition since its inception in 2007. The suppression of it has been most extensive in the US where 24 states have passed laws against individuals and businesses engaging in BDS activity.