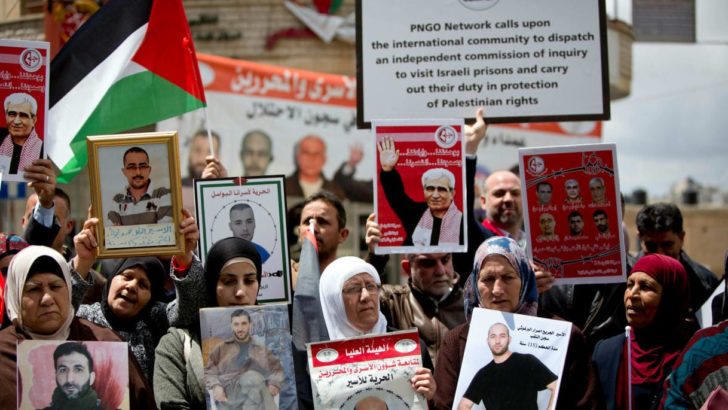 Relatives of Palestinians held in Israeli jails hold their portraits during a protest to mark “Prisoners Day” in the West Bank city of Ramallah, April 7, 2019. (Majdi Mohammed, AP, Haaretz)

Only a handful of Israelis continue working to oppose Israel’s occupation, and they find no takers in Israel. Just like with South African apartheid, it requires people from abroad to end this injustice. Fortunately, some new voices are already speaking out

By Gideon Levy, reposted from Ha’aretz

Some of the people who voted for Kahol Lavan or other parties would like to be rid of the albatross around their necks, but it’s not their No. 1 priority. Loathing for Benjamin Netanyahu, the corruption in government and the Eurovision Song Contest are much higher up on their agenda. And what do these people think could possibly end the occupation anyway? Nothing. It’s no biggie.

The minority that refuses to give up on opposing the occupation can throw in the towel now when it comes to trying to win over Israelis. There’s no one to talk to, and nothing to talk about. There is no partner in Israel, no buyers. Only a handful of warriors remain, the few and the brave.

Hope for ending the Israeli occupation comes from abroad

One can wait for a miracle — or a disaster — or one can shift to the only arena where hope is still possible: overseas.

The argument that this is an undemocratic action aimed at bypassing the will of the people obviously sets a new standard of chutzpah. It’s akin to the claim that the international sanctions against South Africa constituted interference in the country’s domestic affairs.

There, too, there were democratic elections, for whites only, and a majority of the whites had their say and supported apartheid. So what? Did that have anything to do with democracy? Could the international community sit by idly?

The occupation is not an internal Israeli matter, and it has nothing to do with democracy. Israeli Jews who control Palestinians using brutal military force are an international matter.

This is exactly why international institutions were established and why foreign policy exists, and this is exactly why there are judges in The Hague. For 52 years, millions of Palestinians were never asked for their opinion, and for that reason there are few issues that require the intervention of the international community more urgently. It is not only a legitimate sphere of action, it is mandatory — including for Israelis.

Contradictory messages are emanating from this arena. There are signs of loss of interest and fatigue over a conflict that refuses to be resolved. Ultranationalism, xenophobia and Islamophobia bolster support for Israeli colonialism.

But at the same time, there are reinforcements in the form of new, almost revolutionary voices, that will not accept this. In Europe and in the United States there arose a generation that did not know the Holocaust and was unwilling to accept the occupation.

There is today no greater source of hope than the astonishing changes in the U.S. Democratic Party and the U.K. Labour Party. The rise of these parties to power could herald a new international language toward Israel. There are countries where people are only waiting for the signal to join in.

Israeli occupation could collapse in an instant

The fall of the occupation is likely to be dramatic, not gradual, and the house of cards that seems today to be at the height of its powers, with greater international support than ever before, could collapse in an instant. That’s what happened in South Africa.

The formula is a simple one: the dissolution of the existing formula, according to which it benefits Israel and the Israelis to continue the occupation. As long as it exists — and it does exist — there is no possibility of change. The moment one of the components is removed, the Israelis will begin asking themselves, for the first time in their history, whether it’s all worth it and whether they are willing to pay the price.

The answer is clear. There are few Israelis who will be willing to sacrifice their quality of life for the settlement of Ofra, which they have never been to and will never go to.

It’s necessary to take action in the international arena without any guilt feelings, because it is the only hope. It needs additional Israeli voices. I am occasionally asked, “Snob, have you ever given a lecture in Israel?” but in Israel no one cares about the occupation. Occasionally the word “treason” is mentioned, too. It’s the silent ones who are the real traitors, in Israel and, even more so, abroad.

Gideon Levy is a longtime columnist for the Israeli newspaper Ha’aretz.