You Are Here: Home → 14-year-old Ghada was the latest victim of Israel’s dehumanising machine 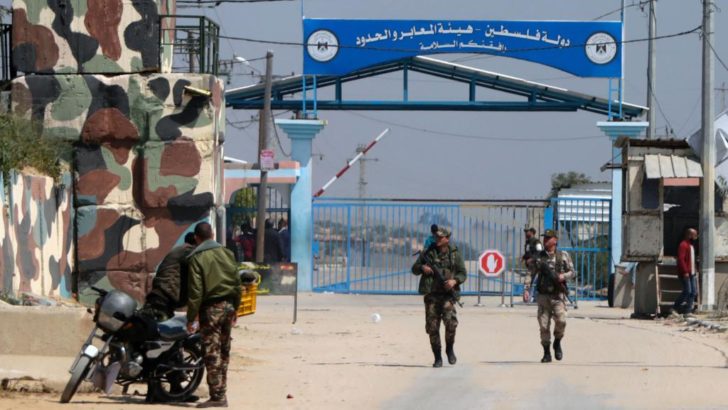 Ghada was taken to the Erez border crossing into Gaza, seen here from the Palestinian side / AFP

How did a 14-year-old Palestinian girl who has never set foot in the open-air prison of Gaza find herself being dumped there by Israeli officials – alone, at night and without her parents being informed? Ghada’s story, like Ahed Tamimi’s and the African refugees’, is the story of the indifference that is created by an occupation machine.

by Jonathan Cook, The National

The terrifying ordeal – a child realising she had not been taken home but discarded in a place where she knew no one – is hard to contemplate for any parent.

And yet for Israel’s gargantuan bureaucratic structure that has ruled over Palestinians for five decades, this was just another routine error. One mishap among many that day.

A single, abstract noun – “occupation” – obscures a multitude of crimes.

What crushes Palestinian spirits is not just the calculated malevolence of Israel’s occupation authorities as they kill and imprison Palestinians, seal them in ghettos, steal land and demolish homes. It is also the system’s casual indifference to their fate.

This is a bureaucracy – of respectable men and women – that controls the smallest details of Palestinians’ lives. With the flick of a pen, everything can be turned upside down. Palestinians are viewed as numbers and bodies rather than human beings.

The story of Ghada – as she has been identified – illustrates many features of this system of control.

She was arrested last month as an “illegal alien” in her own homeland, for visiting her aunt. The two live a short distance apart but while Israel considers Ghada a resident of the West Bank, her aunt is classified a resident of Jerusalem. They might as well be on different planets.

Ghada, we should note, suffers from epilepsy. After two days in detention and overriding opposition from Israeli police, a judge ordered her release on bail. All this happened without her parents present.

Israel controls the Palestinian population register too and had recorded Ghada wrongly as a Gaza resident, even though she was born and raised far away in the West Bank. She is separated from Gaza by Israel, which she cannot enter.

Presumably, no Israeli official wanted to harm Ghada. It was just that none cared enough to notice that she was a frightened child – afraid of being alone, of the dark, of fences and watchtowers. And a child who needs regular medical care.

Instead she was viewed simply as a package, to be delivered to whatever location was on the docket. Despite her anguished protests, she was forced through the electronic fence into the cage of Gaza.

She was finally released by Israel and returned to her parents last Thursday, two weeks after her ordeal began.

Was this not precisely what Hannah Arendt, the Jewish philosopher of totalitarianism, meant when she identified the “banality of evil” while watching the trial of the Holocaust’s architect, Adolph Eichmann, in Jerusalem in 1962?

Arendt wrote that totalitarian systems were designed to turn men into “functionaries and mere cogs in the administrative machinery”, to “dehumanise them”.

Even the worst bureaucracies contain few monsters. Its officials have simply forgotten what it means to be human, losing the capacity for compassion and independent thought.

After five decades of ruling over Palestinians, with no limits or accountability, many Israelis have become cogs.

Most of the Palestinian victims of this “system” remain hidden from view. Only occasionally a Ghada suddenly throws a troubling light on the depths to which Israel has sunk.

Another example is Ahed Al Tamimi, who spent her 17th birthday in prison last week, charged with slapping a heavily armed soldier during an invasion of her home. Moments earlier, his unit had shot her 15-year-old cousin in the face, nearly killing him. She now risks a 10-year jail sentence for her justified anger.

Michael Oren, Israel’s former ambassador to Washington and now a government minister, was so unwilling to believe Ahed could be blonde-haired and blue-eyed – like him – that he ordered a secret investigation to try to prove her family were actors.

Most Israelis cannot believe that a Palestinian child might fight for her home and for her family’s right to live freely. Palestinians are expected to be passive recipients of Israel’s “civilising”, bureaucratic violence.

Soldiers helping settlers to steal her community’s farmland have scrawled death threats against her on the walls in her village, Nabi Saleh.

Oren Hazan, a parliament member from the ruling Likud party, told the BBC last week that Ahed was not a child, but a “terrorist”. Had he been slapped, he said, “she would finish in the hospital for sure … I would kick, kick her face”.

This dehumanising logic is directed at any non-Jew with a foothold in the enlarged fortress state Israel is creating.

But belatedly, a few Israelis are drawing a line. A backlash has begun as Israel this week begins expelling 40,000 asylum seekers who fled wars in Sudan and Eritrea. In violation of international treaties, Israel wants these refugees returned to Africa, where they risk persecution or death.

Unlike Palestinians, these refugees tug at some liberal Israelis’ heartstrings, reminding them of European Jews who once needed shelter from genocide.

Progressive rabbis and social activists have called for Israelis to hide the refugees in attics and cellars, just as Europeans once protected Jews from their persecutors.

It is a battle for Israel’s soul. Can Israelis begin to see non-Jews – whether Africans or Palestinians like Ghada – as fellow human beings, equally deserving of compassion? Or will Israelis sink further into the darkness of a banal evil that threatens to engulf them?