You Are Here: Home → What’s in S.3176, the goodies-for-Israel bill slinking through Congress?

What’s in S.3176, the goodies-for-Israel bill slinking through Congress? 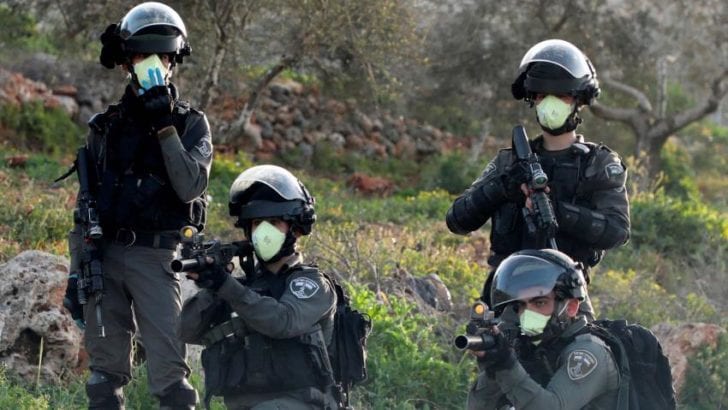 While America grapples with economic devastation, US Congress is expected to pass S.3176, providing $10 million a day in military aid for Israel for the next 10 years. (US media haven’t mentioned it.)

On the first day of the 2020 Congressional session, Sen. Marco Rubio (R-FL) introduced S.3176, the “United States-Israel Security Assistance Authorization Act of 2020.” The bill has been making its way steadily through the legislative pipeline. Last Thursday, it passed the Senate Foreign Relations Committee by very questionable methods.

What were the Senators trying to hide? Middle East policy expert Lara Friedman lays out, in language we can understand, the details of this legislation that promises Israel a minimum of $7,000 a minute for the next ten years.

(Meanwhile, even though it would cement in a massive aid package to Israel in the middle of financial devastation to the U.S. economy, American media aren’t telling American taxpayers about it…)

By Lara Friedman, reposted from Foundation for Middle East Peace

What happened in the SFRC?

On 5/21, the Senate Foreign Relations Committee held a “business meeting.” On the agenda were 21 pieces of legislation (most with amendments to be considered by the committee) – including the nomination of Michael Pack to be the CEO of the Broadcasting Board of Governors. Among the bills on the agenda was S. 3176 – the United States-Israel Security Assistance Authorization Act of 2020. And like many bills on the agenda, S. 3176 was to be considered with a managers’ amendment.

Last year, when the House version of this legislation was brought up first in the House Foreign Affairs Committee and then on the House floor, the measure — which authorizes not only $3.8 billion in funding for Israel for the life of the current MOU, but also millions in new funding for various programs, plus other goodies — was adopted with zero discussion/debate. Yesterday, the SFRC followed suit, adopting S. 3176 without even bothering with a pretense of public discussion/consideration. This lack of transparency is especially egregious because the managers’ amendment to S. 3176 was an amendment in the nature of a substitute (as in, the amendment that deleted the entire text of the original bill and replaced it with new text), and even more egregious because that amendment **WAS NOT MADE PUBLIC UNTIL LONG AFTER THE HEARING ENDED.**

So how did it go down? Literally the entire SFRC business meeting was consumed by contentious consideration of Pack’s nomination — at the conclusion of which, the Chairman noted that time was running out and moved 15 bills “that have been agreed to” – including S. 3176 and its amendment – en bloc. Following some expressions of unhappiness by Menendez (D-NJ) over bills not included in the bloc, the Committee adopted the en bloc bills (with their amendments) by Voice Vote (video of this charade of committee oversight is here).

This week’s actions paves the way for pro-Israel S. 3176 to be brought to the Senate floor, where it will almost certainly be adopted without debate (except perhaps an effort to amend it to add more goodies for Israel). The Senate can then either send S. 3176 to the House or, more likely, it can take up the House-passed version HR 1837 (which the House sent to the Senate back on 7/24/19), amend it to replace the House text with S. 3176, and send it back to the House for action.

Either way, the House and Senate versions of the bill are different enough that further action is required before this legislations goes to the President.

What are the key things to know about S. 3176, the US-Israel Security Assistance Authorization Act of 2020?

Some key points before getting into the details of the bill:

Third, as noted in last week’s Round-Up, the timing of this bill – coming up now – is significant. This legislation represents a veritable “everything Israel could ask for” gift from Congress. Assuming it goes ahead (which is a near certainty), it will be yet another signal from Congress that not only will there be no consequences for annexation (or, indeed, anything Israel does in any conceivable context), but that Congress will continue to seek every opportunity to find new way to reward Israel.

Below is a detailed look at the provisions of S. 3176 (as amended in committee).

Title I – Security Assistance to Israel

Section 103: Amends U.S. law by legislating annual security assistance for Israel under the MOU. Also makes explicit that the aid amount stipulated under the MOU is a floor, not a ceiling (changes “equal to” to “not less than”). Also legislates early disbursal of full amount. (Similar to Section 205 of the House bill)

Section 104: Extends authority for the War Reserves Stockpile through 2025, and authorizes annual increases of up to $200 million for 2021-2025, for a total increase of $1 billion.

Section 106: Authorizes transfer to Israel of precision guided munitions from U.S. reserve stocks “in such quantities as necessary for legitimate self-defense of Israel and is otherwise consistent with the purposes and conditions for such transfers under the Arms Export Control Act.” For such transfers, requires a certification to Congress — “Except in the case of an emergency as determined by the President” — that such transfer doesn’t undermine U.S. military readiness, is “necessary for Israel to counter the threat of rockets in a timely fashion,” and “is in the national security interest of the United States.” (Similar to Section 207 of the House bill)

Section 107: Expressing Sense of Congress that the President “should (1) prescribe procedures for the rapid acquisition and deployment of precision guided munitions for United States counterterrorism missions, or(2) to assist an ally of the United States, including Israel, that is subject to direct missile threat.” (Similar to Section 208 of the House bill)

Section 108: Pushes for Israel to be included “in the list of countries eligible for the strategic trade authorization exception under section 740.20 (c) (1) of title 15, Code of Federal Regulations section…” [which pertains to “exports, reexports, and transfers (in-country) in which the only applicable reason(s) for control is (are) national security (NS); chemical or biological weapons (CB); nuclear nonproliferation (NP); regional stability (RS); crime control (CC), and/or significant items (SI) are authorized for destinations in or nationals of Country Group A:5]“] (Similar to Section 210 of the House bill)

Section 201: Authorizes the Secretary of State Department to enter into an MOU with Israel for the purposes of ensuring US-Israel cooperation to advance common goals in third countries and in various sectors, (including energy, agriculture and food security, democracy, human rights, governance, economic growth, trade, education, environment, global health, water and sanitation). (Similar to Section 106 of the House bill)

Section 202: Authorizes $2 million each year from 2020-2024 ($10 million total) “to finance cooperative projects among the United States, Israel, and developing countries that identify and support local solutions to address sustainability challenges relating to water resources, agriculture, and energy storage…”(Similar to Section 107 of the House bill)

Section 203: Authorizes the Secretary of State to establish a program to “help foster cooperation in the Middle East region by financing and, as appropriate, cooperating in, projects related to innovation and advanced technologies” with the goal of such projects – which each must involve an Israeli partner – being to “contribute to the development and the quality of life in the Middle East region through the application of research and advanced technology” and to “contribute to Arab-Israeli cooperation by establishing strong working relationships that last beyond the life of such projects.” [This would be, in effect, a USAID program incentivize/coerce Arab countries into open normalization with Israel] (Similar to Section 108 of the House bill)

Section 204: Expressing the Sense of Congress regarding the value of US-Israel economic cooperation, including on science and technology innovations, and stating that the President should “regularize and expand existing forums of economic dialogue with Israel and foster both public and private sector participation.” (Similar to Section 110 of the House bill)

Section 206: Requires the President to establish and update, as appropriate, contingency plans to provide Israel with defense articles and services that are determined by the Secretary of Defense to be necessary for the defense of Israel and to brief Congress on these plans. (Similar to Section 203 of the House bill)

Sec 207: Grab bag of other goodies building Israel-related programs into a range of US agencies and on a range of issues. (Similar to Section 110 of the House bill)

Lara Friedman is the President of the Foundation for Middle East Peace (FMEP). She is a Contributing Writer at Jewish Currents and a non-resident fellow at the U.S./Middle East Project (USMEP). Prior to joining FMEP, she was the Director of Policy and Government Relations at Americans for Peace Now (an Israeli organization), and before that she was a U.S. Foreign Service Officer, serving in Jerusalem, Washington, Tunis and Beirut.