A video has surfaced showing Israeli forces shooting dead a 16-year-old Palestinian boy while his hands were up, one of two teens killed while taking part in Friday’s  Great March of Return” protests in the besieged Gaza Strip on Friday. 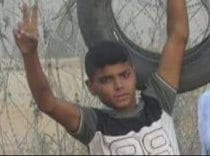 He then picks up a stone and  throws it toward the border with Israel, a common form of protest against the nearly 12-year Israeli siege of Gaza.

He then holds his hands overhead again, periodically clapping them. This goes on for about 11 seconds, when the boy is suddenly shot by an Israeli sniper. He died from his wounds the next morning.

Another teen, Bilal Mustafa Khaffaja, 17, was also shot dead by Israeli forces on Friday, while nearly 400 Palestinians were wounded on the same day, many shot with live fire from the Israeli forces.

Maan News reports: “The video is not the first of its kind to document Israel’s intentional killing of Palestinian children, who did not pose any threat to Israel, and yet Israel rarely takes accountability for such shootings.”

After the video came to light, Israeli authorities announced they would investigate the incident.

To see all Palestinians and Israelis killed since 2000 go here.