You Are Here: Home → Congress today sneaking through $38 billion to Israel – Call now! 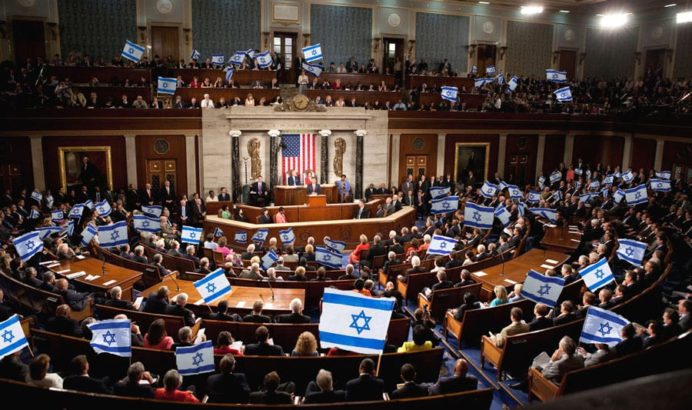 Above image has been edited; Congressional representatives are not yet literally waving Israeli flags in Congress – only in parades.

Israel partisans are sneaking through 2 Congressional bills today! Voters need to phone Congress about them now!

This gives Israel $33 billion on top of the $5 billion that was recently voted.

It also mandates that NASA work with the Israeli space agency, despite accusations that Israel stole classified information.

“Special Envoy to Monitor and Combat Anti-Semitism Act of 2018”

This “special envoy” works to monitor criticism of Israel.

PDFs of the bills that are before Congress today are here and here.

By the way, U.S. media have not informed American citizens about these current bills – while groups like AIPAC have told their members to pressure Congress for them.

Phone your local radio stations to cover this! Please share this with others!

WEDNESDAY, SEPTEMBER 12TH
On Wednesday, the House will meet at 12:00 p.m. for morning hour and 2:00 p.m. for legislative business. Votes will be postponed until 6:30 p.m.

Legislation Considered Under Suspension of the Rules:

12) H.R. 2591 – To amend the Pittman-Robertson Wildlife Restoration Act to modernize the funding of wildlife conservation, and for other purposes, as amended (Sponsored by Rep. Austin Scott / Natural Resources Committee)

18) H.R. 4689 – To authorize early repayment of obligations to the Bureau of Reclamation within the Northport Irrigation District in the State of Nebraska (Sponsored by Rep. Adrian Smith / Natural Resources Committee)

23) H.R. 5317 – To repeal section 2141 of the Revised Statutes to remove the prohibition on certain alcohol manufacturing on Indian lands, as amended (Sponsored by Rep. Jaime Herrera Beutler / Natural Resources Committee)