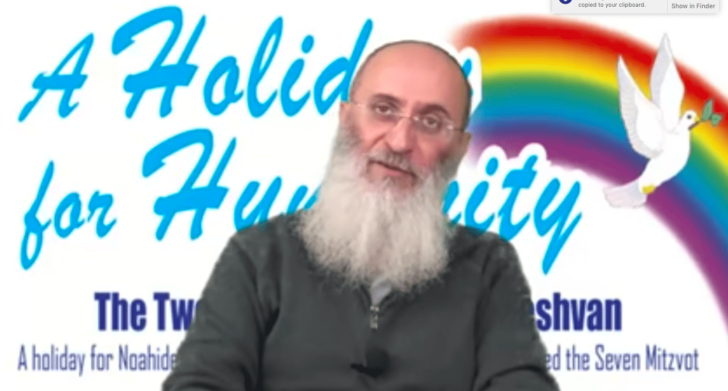 The Noahide Project has the support of Israel’s Chief Rabbinate and the Israeli government. Noahides are members of a new religion founded by rabbis from Israel, mainly from Chabad and the religious Zionist movement – a form of Zionist mission that seeks to create a world religion whose believers adore the Jewish people and the State of Israel… the first Noahide gathering took place in Texas in 1990 and was attended by Rabbi Meir Kahane…

By Ofri Ilany , reposted from Ha’aretz: The Messianic Zionist Religion Whose Believers Worship Judaism (But Can’t Practice It) [Subheads and images added]

“Our friends all over the world, the Noahides… You are the lucid persons in a perplex world. You are the hope of the world. Happy good day.” Thus, in somewhat broken English, Rabbi Oury Cherki, head of the Noahide World Center, greeted his followers in a video clip on the occasion of “Humanity Day,” the holiday of the Noahides (also known as Children of Noah), which was last celebrated on the 27th day of the Hebrew month of Marheshvan (Nov. 10, 2017). According to Jewish tradition, it was on that day that Noah and his family emerged from the ark and received the seven commandments that apply to all human beings, among them the prohibitions on idol worship, on murder and on eating flesh torn from a living animal. When Noah left the ark, he built an altar and made a sacrifice. Which is why the Noahides eat grilled meat on their holiday.

A new religion, subordinate to Judaism

But who are these Noahides? They are members of a new religion, subordinate to Judaism, founded by rabbis from Israel, mainly from Chabad and the religious Zionist movement. According to the World Center, there are dozens of Noahide communities across the world, with more than 20,000 believers. That’s a hefty number, given that the religion was only founded at the beginning of the decade. Small Noahide communities exist in various countries, with the largest one in the Philippines.

Cooperation between Israel and the Philippines is constantly growing, and this week reached new heights with the visit to Israel of the country’s president, Rodrigo Duterte. The Philippines are a key arena of Chabad activity, and one of the primary venues where the new religion is being disseminated. There are four Chabad centers in the country, and in addition to assisting Jews, they support 10 Noahide houses of prayer. The Hasidic emissaries view the Philippines community as the model for Noahide communities in other countries. A group from the community was brought to Israel two years ago, and its members met with Prime Minister Benjamin Netanyahu, who has also sent his greetings to all the communities worldwide.

That there are countries in which groups and communities identify themselves as belonging to the Jewish people, or as descendants of the 10 lost tribes of Israel, is nothing new. Similarly, we’re familiar with Christians who admire Israel. But the Noahides are a theological phenomenon of very recent vintage. It’s a form of Zionist mission, which seeks to create a world religion whose believers adore the Jewish people and the State of Israel – without belonging to either. The believers are required to accept the supremacy of Judaism but are not accepted into the Jewish people and are even barred from upholding such commandments as Sabbath observance. Anyone who wishes to be a Noahide is called upon mainly to recognize the Jewish people and its state.

Last month, Nova Religio, a journal devoted to emergent and alternative religions, published an article by Rachel Z. Feldman, assistant professor of religious studies at Franklin and Marshall College, in Pennsylvania, titled “The Children of Noah: Has Messianic Zionism Created a New World Religion?” In the summer of 2017, Feldman visited Noahide communities on the Filipino island of Cebu, which are supervised by Chabad rabbis. Like most Noahides around the world, the members of the Cebu community came mostly from Protestant churches, but had abandoned their belief in the New Testament.

One of the groups Feldman observed lives in a mountainous, “financially challenged” rural region. In the past its members were cave dwellers who belonged to a Sabbath-observing church called Sacred Name Believers. Their leader is the Noahide preacher Emmanuel Villegas. For years he visited poor communities on various islands and converted them to the Children of Noah. He called on them to renounce Christianity and to burn their holy books – though not before cutting out the Tetragrammaton (God’s Hebrew name) from the texts.

About 20 years ago, the community’s members moved to the village of Lamac, where they built a house of worship marked with a large Israeli flag at the entrance. In accordance with the directives of Chabad rabbis, they no longer observe Shabbat, as this precept is reserved for the members of the Jewish faith alone and is denied to Noahides. They are permitted to greet each other with the words, “Happy seventh day,” but not to utter the word “Shabbat.” Instead of the Kabbalat Shabbat ceremony used by Jews to welcome the Sabbath, the Chabad rabbis invented a ritual for them in which they light seven candles (to denote the Seven Noahide Laws).

Feldman quotes one members of the community, who explained to her, “You are very lucky because you are white, and white people are rulers of the earth. But you are also a Jew. You are very gifted because you have blood from the Chosen people, from Abraham and Isaac.” In his sermons, Villegas explains why his community is forbidden to uphold Jewish commandments, and dwells on the essence of the difference between Noahides and Jews. Jews, he says, possess an inner sanctity that draws them close to a divine level: “The Jew has five levels of soul while the Noahide only has three levels and remains on an animalistic level, and this is written in the Kabbalah.”

Noahides are incapable of reaching the level of the Jews, but they can learn how to improve themselves by way of the seven commandments. The questions-and-answers site asknoah.org also instructs the Children of Noah on how to cope with animal cravings. In the meantime, Chabad is making efforts to spread the word among non-Jews in Israel, too – a project that was introduced by the late Rabbi Boaz Kali, from Haifa.

The Noahide religion constitutes a new form of colonial relations and racial ideology in which the rabbis are shaping a new faith for the inhabitants of the “global south” as an instrument to advance religious and nationalist goals.

Liberal Jewish philosophers of the modern era, such as the German-Jewish thinker Hermann Cohen, viewed the Seven Laws of Noah as the universal basis of the Bible, which prove that Judaism contains a general moral outlook that transcends the question of the fate of the Jewish people. But the interpretation of Rabbi Cherki and the Chabad rabbis uses the Noahide precepts to lay down an ethnic hierarchy between Jews and gentiles. Feldman notes that the Noahide religion constitutes a new form of colonial relations and racial ideology in which the rabbis are shaping a new faith for the inhabitants of the “global south” as an instrument to advance religious and nationalist goals.

Feldman points out that the first Noahide gathering, which took place in Texas in 1990, was attended by Rabbi Meir Kahane [founder of the violent Jewish Defense League (JDL)]. After Kahane’s assassination, that same year, the Temple Institute, which advocates the building of the Third Temple on Jerusalem, on the site of the first two, started to promote the Noahide project. In the view of the institute’s rabbis, the gentiles’ upholding of the Seven Laws is an important stage in the messianic process at the height of which the temple will be built and Israel will become a theocracy that will gain the gentiles’ support.

This is the world order being promoted by the Noahide Project, which has the support of Israel’s Chief Rabbinate and of the Israeli government. The Noahide theological project is closely related to Netanyahu’s foreign policy approach, which is based on religious support for Israel. As he worded the theological message he offered on Humanity Day in 2015, “The Seven Mitzvot of the Children of Noah are matters of both faith and morality, which according to our sages obligate all of the non-Jewish peoples of the world. These commandments serve as a basis for establishing a civilized society.”

The final goal of Rabbi Cherki and the Noahide World Center, we are told, is a modest one: seven billion believers.

The Extremist Origins Of Education And Sharing Day: Why Is The US Honoring A Racist Rabbi?