You Are Here: Home → Jerusalem hospital says US decision to cut $20 million in aid is unjustified 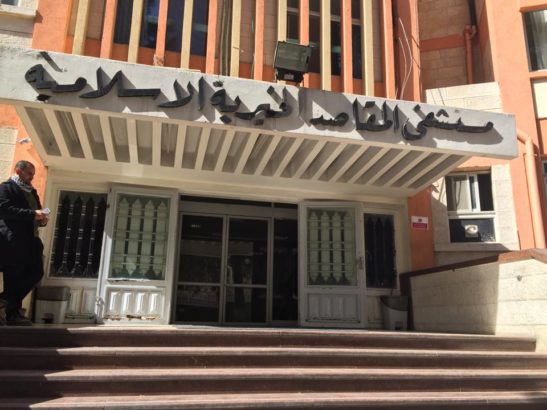 Makassed Hospital is one of the main referral hospitals for the Palestinian community of Jerusalem, West Bank, and Gaza Strip providing a range of specialties.

Kudos to US President Trump for his frugality: he is saving a bundle by not only ending aid to UNRWA, but now cancelling a $20 million grant to Palestinian hospitals in occupied East Jerusalem.

JERUSALEM, September 8, 2018 (WAFA) – Responding to the US decision to cancel the $20 million grant allocated to Palestinian hospitals in occupied East Jerusalem in a bid to pressure the Palestinians to accept US dictates, Makassed Hospital, the largest in the city, said on Saturday that this decision harms the hospitals, mixes political issues with medical and humanitarian ones, and is totally unjustified.

Hospital director Bassam Abu Libdeh said in a statement that this decision comes at a time when the hospital is facing a severe financial crisis due to the large cash flow deficit and the outstanding debts and entitlements of the Palestinian government.

He urged all concerned Palestinian and international parties to act quickly and swiftly to help it deal with its outstanding debt for banks, suppliers, cleaning companies, the electricity company and the pension fund and which has reached $25 million and threaten the continuity of its operations and thus the lives of its patients.

“The hospital’s share of the total US grant is 45 million shekels ($12.5 million), which helps a great deal its various departments and the provision of services for its patients who come from the West Bank, the Gaza Strip and occupied Jerusalem,” he said.

Depriving the hospital of these funds demands an immediate financial intervention from the Palestinian government to help the hospital pay the income tax, the property tax and the pension fund imposed by the Israeli government, said Abu Libdeh.

He wondered why would the US government mix political issues with medical and humanitarian issues, which he said is totally odd and unjustified.