You Are Here: Home → Wake the sleeping giant: Become a Pillsbury-Free-Church 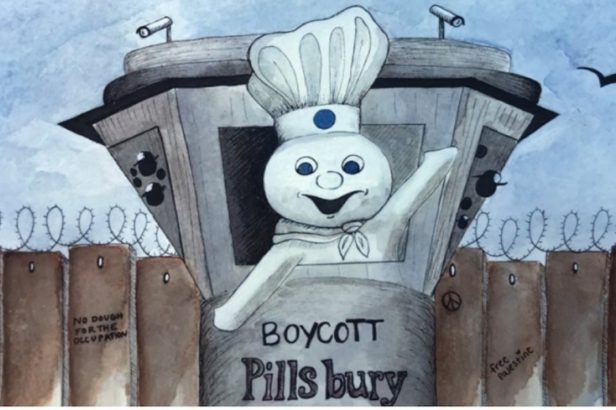 This church is taking a stand: “no dough for the occupation!” How many others will follow their lead?

Ainsworth United Church of Christ of Portland, Oregon just pledged to be a Pillsbury-Free-Church in support of Palestinian human rights. Join them!

The Church is a sleeping giant with enormous power to roar about injustice. If truly awake, the Christian Church will roar about the nightmare of injustices Palestinians live with every day. Ainsworth United Church of Christ of Portland, Oregon is one awakened church. Our church just pledged to be a Pillsbury-Free-Church in support of Palestinian human rights. We hope our action will be a spark to awaken more sleeping local churches across the nation and our government. Join us! Boycott Pillsbury!

Why boycott Pillsbury? It seems that cute little Dough Boy got himself nestled into an illegal Israeli settlement in East Jerusalem. The United Nations lists General Mills, owner of the Pillsbury brand, as one of the top seven abusers of international law by producing Pillsbury products in Atarot, an illegal settlement. This Palestinian land was confiscated then annexed by Israel. Pillsbury profits from the theft of this land, use of water, and other resources. Pillsbury is perpetrating and profiting from an inhumane system of segregation by making products in this settlement. If we say we love and follow Jesus, the Bread of Life, then we must reject this Bread of Oppression and Boycott Pillsbury!

There are many reasons to be awake!

I once read a list of abuses to the Ainsworth congregation. Here is a short version: In the West Bank, Palestinian children as young as six are pulled from their beds in the middle of the night by the Israeli Defense Forces and arrested. No parent or lawyer is allowed to go with them. They are often tortured and then forced to sign confessions in Hebrew, a language they do not understand. Over 400 “flying” Israeli checkpoints block movement. Eyewitnesses report that Palestinians have died stopped at checkpoints while on the way to the hospital. Palestinians are blocked from their own fields, jobs, and children from school. Palestinian homes are systematically bulldozed by the Israeli government and the owner is sometimes forced to pay for that demolition while homeless.

Settlements have water provided 24/7 for homes, gardens, bushes, and pools while water in some Palestinian areas is distributed only once per week to small tanks on their roofs. They ration their water. Settlers have burned Palestinian owned orchards. Palestinian Bedouin’s goats and sheep have been slaughtered by settlers who are not arrested by police and soldiers who protect the settlers. Settlers travel on settler-only roads that lead to Jerusalem and their jobs. Settlers have specifically colored license plates. Palestinians have different colored license plates limiting access to settler-only roads so they struggle on torn-up old roads.

Work permits get Palestinian workers through West Bank checkpoints to go to the Pillsbury factory, but they are not allowed to work anywhere else in Israel. Permits to work can be denied at any point. Waiting at the checkpoints to get to the factory can take hours. If workers are late, they can lose their jobs. General Mills says Palestinians are paid equally to their Israeli counterparts at the factory, but over 170 Palestinian unions and organizations have called on the people of the world to boycott any international company producing products in illegal settlements. General Mills is immoral to argue “equal pay” when one of the parties you’re paying stole the land your factory sits on from the other party. You don’t get a trophy for fulfilling one legal obligation while committing a crime against humanity.

The Palestinians in Gaza live in the largest open-air prison in the world. Israel gets USA funding for an Iron Dome which stops homemade missiles from Gaza. Nothing stops the bombs dropped by Israel on Gaza using American made planes. Homes, hospitals, and schools have been bombed. Teenagers’ legs are shot by the IDF and then amputated crippling the next generation of boys from Gaza.

I had gone on for eight minutes, reading this list to the congregation. Feeling the horror in the room, I asked if they wanted me to stop. They all said “Yes!” Then I said, “You lived that for 8 minutes. Can you imagine being Palestinian and living that horror for your entire lifetime?

Jaw-dropping, right? I traveled there four times and it only gets worse. Even some of the Pillsbury family, whose family relative started the company, are calling on us to boycott Pillsbury. They say, “Not in our name!” Charlie Pillsbury produced a film you can view here:

Christians in Palestine wrote “Cry for Hope: A Decisive Call for Action” calling on the international community to confront Israel’s theft of land and abuses. The National setting of the United Church of Christ since 2005 is on record supporting the use of economic measures, including boycott, sanctions, and divestment which pre-dates the “Cry for Hope.” The national UCC has joined the Pillsbury Boycott. The national settings of the Methodists and Presbyterians have also taken an anti-occupation stance and pro-Palestinian human rights.

Now it is our time for Christians in local churches to rub the sleep from our eyes and become Pillsbury-Free-Churches. What a roar that will be!

Boycotting Pillsbury is easy peasy! Do we really need those specific Pillsbury biscuits or sweet treats, or can we pick some other brand that does not have ties to that horror show? You can use the Pillsbury Boycott as a vehicle in your church to teach your congregation what is going on in Palestine/Israel. Since we give more American tax dollars to Israel than any other country in the world, more than all the countries of Africa combined, it is important to wake up!

Boycott Pillsbury!
Become a Pillsbury-Free-Church
Wake up and Roar!