You Are Here: Home → Israel-Palestine: To end torture, Shin Bet interrogations must be filmed

Israel-Palestine: To end torture, Shin Bet interrogations must be filmed 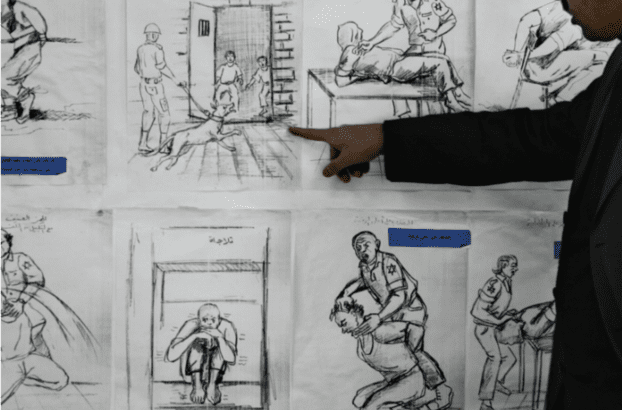 The use of torture by Israel’s Shin Bet (internal security service) is rampant. (Pictured: illustrations of some of the torture methods employed by Israeli interrogators)

In two decades, Palestinian prisoners have lodged 1,300 complaints of torture against Israel  – yet not one Shin Bet interrogator has been indicted. This human rights advocate calls for interrogations to be video taped.

Haaretz recently published a sensational article, which could have been ripped straight out of a television courtroom drama: Israeli prosecutors dropped all charges against three Arab residents of Jaffa, who had confessed during a Shin Bet interrogation to a serious attack on a soldier, after security-camera footage proved they were not even at the site of the assault.

What could have compelled these innocent people to confess to a crime they did not commit, which might have landed them in jail for many years? For those of us who routinely deal with the operational methods of the Shin Bet, the answer was clear: torture.

An investigative report that aired on Hamakor last week only confirmed what we had already deduced by connecting the dots. The detainees were suspected of security offences at the height of a national crisis; they are Palestinian citizens of Israel; they were placed in detention and interrogated by the Shin Bet; therefore, they were tortured.

How was this so obvious to us? Inasmuch as Shin Bet interrogators know very well that the Israeli justice system, including its courts, will cover up their wrongdoing, torture is always an option. Of 1,300 complaints of torture submitted against Shin Bet interrogators since 2001, only two have led to criminal investigations, and none have produced indictments.

Investigations were closed in the two most serious cases known to us in recent years: that of Samer Arbid, nearly tortured to death, and that of a young Palestinian woman who was forcibly and invasively strip-searched. Those responsible were not charged.

The use of torture, once confined to dealing with Palestinians in the occupied territories, has inevitably found its way into interrogations of Palestinian citizens of Israel, and even of Jews, as in the case of Amiram Ben-Uliel, whose conviction for the murder of members of the Dawabshe family was allegedly based on a confession extracted under torture.

A world where torture is possible is ultimately a world where no one is safe from it. This lesson has been learned in the harshest possible manner by the formerly accused residents of Jaffa, alongside many other Palestinian citizens of Israel during the blood-soaked month of May.

The methods of torture revealed in this latest investigation are no different from those used in dozens of testimonies collected by the Public Committee Against Torture in Israel annually: beatings, painful restraints, sleep deprivation, withholding of food, threats to harm a detainee’s family, isolation, and prevention of access to a lawyer. All are well-known components of the Shin Bet’s repertoire.

But what can be done to end this? How can we begin changing these disgraceful statistics – zero indictments after 1,300 complaints? Firstly, lawmakers must pass legislation that unequivocally prohibits the use of torture, whether against citizens of Israel or non-citizens. The legislation must stipulate that Israeli society absolutely rejects torture, while ensuring accountability for those who employ such methods.

Secondly, Shin Bet interrogations must be recorded on video. While Israeli law requires audiovisual documentation of police interrogations for serious crimes, the Shin Bet is exempt from this rule. Thus, nearly all complaints become “he said, she said” situations, and investigators invariably take the word of Shin Bet agents over the testimonies of prisoners who dare to lodge a complaint.

It wasn’t by chance that in the two isolated cases cited above, the use of torture was revealed for all to see, and resulted in criminal investigations rather than being closed after superficial “preliminary reviews”. In the Jaffa case, were it not for the resourcefulness of the accused’s legal team in obtaining video footage, the men would likely be set to serve long prison sentences for a crime they did not commit.

Only full documentation of Shin Bet interrogations will enable those who allege torture to prove their cases. Without this type of full documentation, regrettably, the next false confession is only a matter of time.