You Are Here: Home → UPDATE from Gaza: Palestinian death toll reaches 15; half of injured are children

UPDATE from Gaza: Palestinian death toll reaches 15; half of injured are children 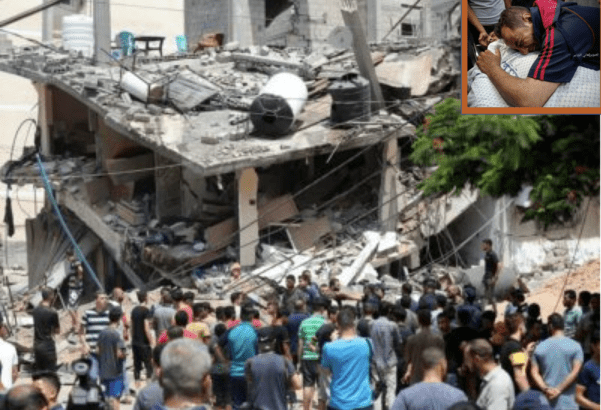 Israeli attacks in the last two days have caused damage to at least 650 buildings in Gaza. (IAK)

Israeli airstrikes have killed 15 Palestinians; at least 140 Palestinians – more than half children, and many women – have been injured, including some who suffered life-threatening wounds. In only two days, Israel has targeted 650 homes and buildings. This is a developing story.

This is a developing story. We will bring updates as they become available.

The Health Ministry said the Israeli army fired missiles at a civilian car in the Um an-Nasr village in Beit Hanoun in the northern part of the Gaza Strip, killing a woman, identified as Na’ama Mohammad Abu Qayda, 62, and wounding several Palestinians, including at least one who suffered serious wounds.

Local sources said Na’ama’s son was supposed to get married today, adding that the army fired a missile at the family’s car while driving to the bride’s house.

In addition, the Israeli air force fired missiles at Palestinians in the Sha’sha’a area, east of Jabalia in northern Gaza, killing Hussein Mohammad Mansour, 26, and wounding at least ten Palestinians, some seriously.

Another Palestinian, Nour Hussein Zoweidi, 21, was killed after the army fired missiles into Beit Hanoun in northern Gaza.

The army also fired missiles into a five-story building near the Shifa Medical Center southwest of Gaza and destroyed it, causing damage to several surrounding homes. Palestinians from the local Shamlakh family own the building in the Sheikh Ejleen area.

It is worth mentioning that, as the Israeli offensive continued to the second day, the number of homes and buildings targeted by the army arrived at 650.

Also, a child, ten years of age, and a young man, 23, were seriously injured after the Israeli army fired missiles into residential areas in Abasan al-Kabeera town, east of Khan Younis, in the southern part of the Gaza Strip.

In a statement, the Health Ministry in Gaza has confirmed that the Israeli offensive on Gaza has so far led to the killing of at least 15 Palestinians, including two women and a female child, only five years of age.

The Health Ministry added that at least 140 Palestinians, more than half of whom are children, and many women, have been injured, including some who suffered life-threatening wounds.