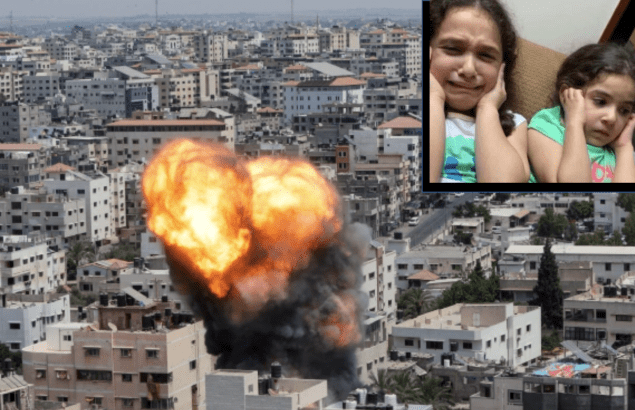 Israel initiated airstrikes on Gaza residential neighborhoods Friday, with deadly results. This is a developing story.

This is a developing story. We will bring updates as they become available.

Friday afternoon, the Israeli Occupation Forces (IOF) launched an offensive on the Gaza Strip that have so far killed 10 Palestinians, including a commander in al-Quds Brigades “Islamic Jihad’s military wing” and 3 civilians: a woman killed in her house and a girl killed near her house.  Also, 48 other Palestinians, including 9 children and 4 women, were injured; most of them were civilians.

The offensive came 3 days after IOF declared a state of alertness, deployment of military backups and closure of crossings with the Gaza Strip, amid threats by the Israeli military and political levels to perpetuate the Israeli collective punishment and retaliatory policy against civilians.

PCHR fears that there will be more civilian casualties in an area considered among the most densely populated areas in the world and where there is not any form of protection, including public and private shelters or even safe corridors.

PCHR brings to mind that in recent offensives on the Strip, civilians and civilian objects were always under IOF’s attacks as a way of exerting pressure on the Palestinian armed groups.

IOF declared that its warplanes unleashed airstrikes on the Gaza Strip, and a “special situation” has been declared on the Homefront.  Also, they declared the start of a military operation dubbed as “Breaking Dawn” against Islamic Jihad Movement.[1]

IOF started the offensive with an extrajudicial execution as the Israeli military spokesperson announced, “in an operation by IDF and Shin Bet, Taysir al-Ja’abri, Islamic Jihad Commander in Northern Gaza, was killed.”[2]

The latest developments are as follows:

Few minutes later, IOF’s warplanes launched a missile at a group of people who were in the street near their houses in al-Shija’iya neighborhood, eastern Gaza.

As a result, ‘Emad ‘Abdel Rahim Ibrahim Shallah (52) and 2 civilians were killed:  One of them was a girl identified as Alaa’ ‘Abdullah Riyadh Qaddoum (5) and the other was Yousif Salman Mohammed Qaddoum (24).  Both sustained shrapnel wounds all over their body.

Around the same time, Ahmed Mazen Mahmoud ‘Azzam (25) was killed in an Israeli strike on an observation post in eastern al-Zaytoun neighborhood.

The Israeli strikes on Gaza City injured 36 Palestinians, including 5 children and 4 women.

16:20: an artillery shell fell on a house belonging to ‘Adnan ‘Atiyah al-‘Amour in al-Fokhari area, eastern Khan Younis.  As a result, the owner’s 22-year-old daughter, Doniana, was killed after sustaining shrapnel wounds all over her body.

Around the same time, Mohammed Ahmed Nasrallah (25) was killed while another person and his daughter were injured in an Israeli strike on an observation post, northwestern Beit Lahia.  Also, 2 others were injured in a similar strike in eastern Beit Hanoun.

16:25: Fadel Mustafa Zo’arob (30) and Mohammed Hasan al-Bayouk (35) were killed after Israeli warplanes launched 2 missiles at a military site in western Khan Younis.  Also, 7 others were wounded, including 2 children, due to shrapnel scattered in the area.  One of the strikes caused damage to an ambulance in Muskat Clinic in Qizan An-Najar area after shrapnel hit it.

16:50: a man and a child were injured after a strike hit a military site in al-Brazil neighborhood, southern Rafah.

Moreover, IOF’s warplanes carried out tens of airstrikes on military sites, observation posts and lands; some of them are located in residential neighborhoods, causing a lot of damage.

PCHR’s fieldworkers and lawyers continue to document and investigate all these incidents as well as monitoring violations caused by the ongoing attacks, which IOF declared would take some time.

PCHR strongly condemns IOF’s extrajudicial executions within an Israeli stated and official policy that has collected lives of hundreds of Palestinian political figures and activists.

This policy is in violation of the international humanitarian law rules which prohibit such kind of murders.

PCHR emphasizes that these airstrikes violate the principles of necessity and proportionality while conducting directed attacks against densely populated areas and use of weapons based on collective punishment is a grave breach of the four Geneva Conventions of 1949 and amount to war crimes.

PCHR calls upon the international community to take immediate action in order to stop the Israeli crimes and avoid any further deterioration of the situation.