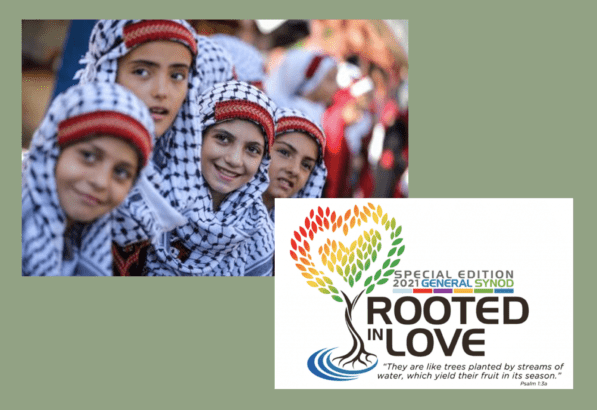 The United Church of Christ (UCC) conference has voted overwhelmingly to stand with the people of Palestine, against their oppression by Israel.

While the words “apartheid” and “sin” caused fear and trembling among some delegates, the UCC statement in support of justice for Palestinians was met with 83% approval (14% opposed, 3% abstained).

by Tiffany Vail, reposted from the United Church of Christ website, July 19, 2021

UPDATE: a previous preliminary report reposted from the UCC website seemed to imply that the church had rejected the term ‘apartheid.’ This post has been updated with the fact that the General Synod ultimately included it. Please go here for the story.

The United Church of Christ “Special Edition” General Synod on Sunday evening approved a resolution decrying oppression of Palestinian people as a matter of faith, but not before a debate over whether calling that oppression “apartheid” and naming it a “sin” was too inflammatory.

The committee that considered the resolution had recommended delegates approve an amended version that softened the tone of what had originally been presented by six churches. But delegates reversed two of three major changes the committee made before approving the resolution by a vote of 462 to 78, with 18 abstentions.

The commitee’s chair, the Rev. Elliot Munn of the Vermont Conference, said there was strong consensus in favor of the resolution, except around those particular words.

“Some folks wanted to maintain the initial language of the resolution, which offered an unambiguous prophetic vision. Others were more cautious about how particular words would affect their interfaith friends and colleagues,” he said.

Rev. David Grishaw-Jones of the New Hampshire Conference argued that labeling the current oppressive system of government in Israel as apartheid was critical.

“It is our Palestinian partners out of their own lived experiences of dispossession and apartheid who called upon us to name what they have already experienced and continue to experience every day,” he said.

The Rev. Jeff Lukens of the Southern New England Conference served on that committee and had advocated for softening the language.

“The intention of removing the word ‘apartheid’ was to pay attention to our very real interfaith relationships we have here in the United States on the ground,” he said. “While the global impact of this resolution is very little, it might damage our interfaith relationships that we have. Toning down the inflammatory use of the word apartheid will help us to speak to the truth of what is happening and allow us to continue to be faithful in our interfaith work.”

The resolution, called “Declaration for a Just Peace between Palestine and Israel,” is written in a confessional format and was inspired by a plea from Palestinian Christians, called “Cry for Hope: A Call for Decisive Action.” It asked churches worldwide to join in declaring “that support for the oppression of the Palestinian people, whether passive or active, through silence, word or deed, is a sin.”

Some delegates balked at the word “sin” in the first “Be It Resolved” line of the document, which said “We affirm that the continued oppression of the Palestinian people remains, after more than five decades of oppression of the Palestinian people, a matter of theological urgency and represents a sin in violation of the message of the biblical prophets and the Gospel.” The committee had removed “sin in.” Delegates put it back in.

The Rev. Shari Prestemon, UCC Board member and Conference minster in Minnesota, made the motion to return the word to the statement.

“Grounding this declaration in theological terms is essential,” she said. “What we speak of is not just a geopolitical matter. We speak as church, where our sacred scriptures and theological language must always inform and shape us. The systemic oppression and denial of human and civil rights for Palestinians caused by the polices of the state of Israel violate the vision of just relationships set forth by ancient prophets and the gospels. They can rightly be described as a sin against God and God’s children.”

The Rev. Guy Johnson, a delegate from Ministers for Racial, Social and Economic Justice, asked “if this is not a sin, then what is?”

“I understand it might make some of our interfaith partners a little uncomfortable, but I believe we are called to comfort the afflicted and to afflict the comfortable,” he said. “And right now those who are in positions of power in Israel seem to be a little comfortable making sure their Palestinian siblings are kept in an apartheid state.”

The resolution explicitly rejects the idea that speaking against the Israeli government – as opposed to Jewish people – is anti-Semitic. It affirms that all people have a right to self-determination, and that “a just resolution of conflicting claims is only achieved through the equal protection of civil rights, the fair and just sharing of land and resources, and peaceful negotiation based on international law and U.N. resolutions.”

In an implementation conversation that took place on Friday, proponents of the resolution presented various steps that could be taken by individuals, congregations, associations, conferences and the national setting. They included such things as studying this resolution, recommitting to previous resolutions on the topic, supporting those in the secular world trying to speak out on the topic, and advocating for the cessation of U.S. military aid to Israel.

For the perspective of indigenous Palestinian pastor Rev. Dr. Munther Isaac, read “An Open Letter to US Christians from a Palestinian Pastor,” in Sojourners Magazine, or any of the articles and books by Rev. Dr. Mitri Raheb.

Rev. Dr. Munther Isaac is the pastor of the Evangelical Lutheran Christmas Church in Bethlehem, academic dean at Bethlehem Bible College, and the director of the Christ at the Checkpoint conferences. His latest book is The Other Side of the Wall: A Palestinian Christian Narrative of Lament and Hope.

Rev. Dr. Mitri Raheb is the Founder and President of Dar al-Kalima University College of Arts and Culture in Bethlehem, a co-founder of Bright Stars of Bethlehem, a not for profit 501c3 in the USA, and a founding member and author of Kairos Palestine. The most widely published Palestinian theologian to date, Dr. Raheb is the author and editor of 40 books. His books and numerous articles have been translated so far into eleven languages. Rev. Raheb served as the senior pastor of the Christmas Lutheran Church in Bethlehem from June 1987 to May 2017 and as the President of the Synod of the Evangelical Lutheran Church in Jordan and the Holy Land from 2011-2016.