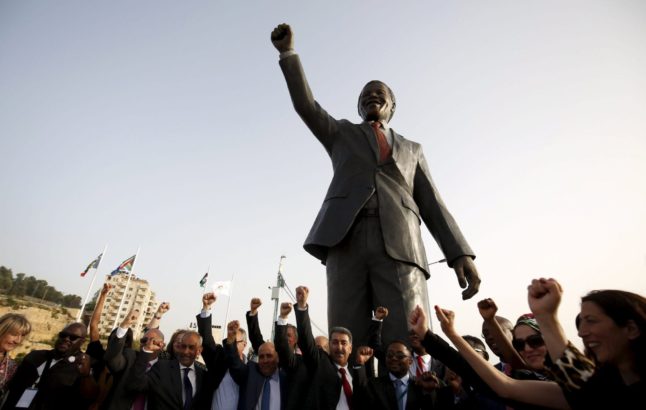 Palestinian and South African officials pose in front of a giant statue of Nelson Mandela during its inauguration ceremony in the West Bank city of Ramallah on April 26, 2016. (AFP PHOTO / ABBAS MOMANI) Mandela led South Africa out of apartheid through his activism and later his presidency.

South Africans – who should know apartheid when they see it – called out Israel as “the world’s last functioning apartheid state” during a UN hearing this week. They no doubt recalled the words of South African hero, the late Nelson Mandela, who famously said, “We know too well that our freedom is incomplete without the freedom of the Palestinians.”

During a United Nations hearing on its human rights record in Geneva on Tuesday, the Israeli government was accused of ongoing abuses and anti-democratic policies as it was called out as the world’s last functioning “apartheid state” by a delegate from South Africa—a nation with a unique vantage from which to judge.

“Israel is the only state in the world that can be called an apartheid state,” the South African delegate said to UN members during the Human Rights Council hearing at the Palais du Nations in Geneva. “We remain deeply concerned at the denial of the right of self-determination to the Palestinian people, in the absence of which no other human right can be exercised or enjoyed.”

South Africa says Israel is the only apartheid state in the world, in remarks made today at the UN in Geneva. https://t.co/Ere2Ih3NfX

According to Al-Jazeera, the delegate who made the remarks was “echoing the recommendations of several member states that called, above all, for an end of the 50-year-long occupation of Palestinian territory.”

In its reporting, the Middle East Monitor cited a pair of tweets from Human Rights Watch staff, Omar Shakir and John Fisher, both of whom were monitoring the hearing:

#SouthAfrica at #UPR29: “#Israel is the only State in the world that can be described as an apartheid State”. Israel calls point of order, saying focus should be on human rights, not politics, fails to address SA’s rec that Israel respect Palestinian’s rt to self-determination

While Israel continues to accuse the HRC of bias and denies responsibility for the crimes that correspond to the illegal occcupation of the Palestinian Territories, the independent review by Human Rights Watch found that the Israeli government continues a pattern of systemic human rights violations—many of which have recurred consistently over the past 50 years of the occupation and some that have intensified significantly in recent years.

According to HRW’s review, those violations include: (1) unlawful killings and war crimes without accountability; (2) illegal settlements and institutional discrimination; (3) forced displacement; (4) prolonged closure of Gaza and unjustified movement restrictions in the West Bank; and (5) abusive detention.

Is Israel an Apartheid State? Rhetoric or Reality