You Are Here: Home → UN Security Council to Hold a Session on Palestine

UN Security Council to Hold a Session on Palestine 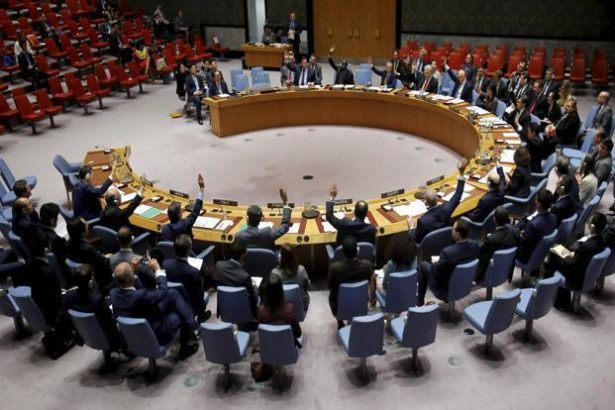 The UN Security Council is meeting Thursday, 25 January, to discuss implementation of UN resolutions on the Palestinian questions. On 22 February, they will also discuss the occupation and the UNRWA situation, which has become dire since the US decided to slash its contribution.

Palestine’s Permanent Representative to the United Nations, Riyad Mansour, said on Wednesday that the Security Council is scheduled to meet on Thursday, in order for the Council members to shoulder their responsibility regarding implementation of the UN resolutions related to the Palestinian question.

According to WAFA, another meeting of the Security Council will be held on the 22nd of next month to discuss the situation of Palestinians after 50 years of Israeli occupation, in addition to the state of affairs of the United Nations Relief and Works Agency for Palestine Refuges (UNRWA), Mansour told Voice of Palestine radio.

He said that he is going to request a meeting with the UN Secretary-General Antonio Guterres, in the near future, to discuss with him several ideas related to resolving the UNRWA crisis, noting that a high-level emergency meeting could be held at the United Nations in this regard.

UNRWA came under pressure this month, when the United States, its largest contributor of over $350 million, annually, said it was going to gradually slash its contribution to the UN agency, starting with $65 million from the first installment of $125 million. It also cancelled an earlier pledge of $45 million in food aid that was going to be distributed through UNRWA.

Palestinians criticized the US measures against UNRWA describing them as extortion to pressure the Palestinian Authority to accept US and Israeli dictates for a settlement that does not suit Palestinian aspirations.

Hundreds of Palestinian refugees gathered on Wednesday, in Jabalya refugee camp, to the northeast of Gaza, to protest the decision.

On the issue of Palestine’s full membership in the United Nations, Mansour told Voice of Palestine that he was in contact with the 14 member states of the Security Council, with the exclusion of the US, to know their position on this issue.

Mansour also said that President Mahmoud Abbas is going to meet African heads of state on the side of the African summit scheduled for Addis Ababa, at the end of this month.