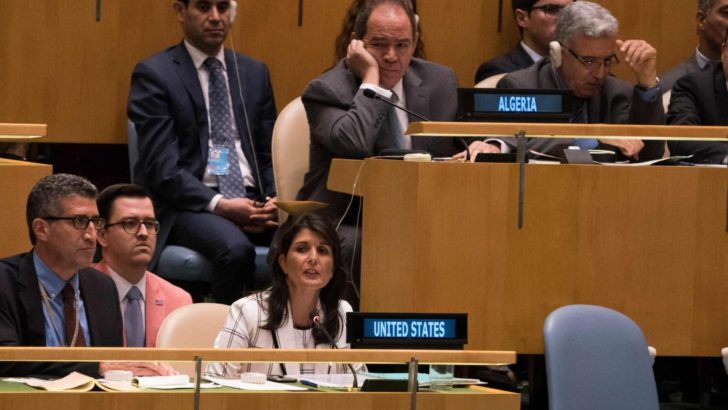 Yet again, Nikki Haley puppets the Israeli narrative – “the UN is always picking on Israel,” “condemn Hamas” – standing nearly alone against world opinion. Not only did the resolution condemning Israel pass, but the amendment condemning Hamas failed to pass. Score one more for justice.

by Amir Tibon and Reuters, Ha’aretz

The UN General Assembly passed a resolution Wednesday night condemning Israel for excessive use of force against Palestinian civilians and proposing forming an international protection mechanism in Gaza.

The resolution is not expected to lead to action against Israel since any attempt to bring such a decision to the Security Council is expected to be met with a U.S. veto.

The resolution passed with 120 countries in favor, eight against, and 45 abstaining. It was put forward in the General Assembly by Algeria, Turkey and the Palestinians.

U.S. Ambassador to the UN Nikki Haley criticized the General Assembly for discussing the situation in Gaza instead of the crises in Nicaragua, Yemen and Burma. “Gaza is important, but what makes it more urgent than many other desperate places?” Haley asked. “What makes Gaza different for some is that attacking Israel is their favorite sport.” She called the resolution condemning Israel “totally one-sided” and unhelpful for promoting peace.

Australia, the Marshall Islands, Micronesia, Nauru, Solomon Islands and Togo joined Israel and the United States in voting against the resolution. [Editor’s note: see how tiny some of these nations really are.]

While procedural maneuvers were used to block it, We’re proud that by working with the Americans and our friends around the world, a majority of nations in the @UN voted for the first time to condemn the terrorists of Hamas. pic.twitter.com/coyzqWPq1P

“We need protection of our civilian population,” Palestinian UN envoy Riyad Mansour told the General Assembly before the vote, adding that the resolution was “intended to contribute to a de-escalation of the volatile situation.” “We cannot remain silent in the face of the most violent crimes and human rights violations being systematically perpetrated against our people,” Mansour said.

In a statement, Netanyahu thanked Haley and the Trump administration’s support for Israel at the UN. “The UN’s incessant focus on Israel not only brings shame to the organization. It also draws attention away from so many other pressing issues that demand the attention of the international community.

“As for Gaza, Hamas is responsible for the terrible situation there and for the loss of life over the last few weeks. Rather than improve the lives of the people of Gaza, Hamas is using the civilian Palestinian population as human shields in its unremitting terror war against Israel.

“The people of Gaza are not our enemy. Hamas is,” Netanyahu said, adding Israel would continue to defend itself and “welcome efforts” to improve life in Gaza.

The resolution asked Guterres to report back within 60 days on proposals “on ways and means for ensuring the safety, protection and well-being of the Palestinian civilian population under Israeli occupation, including … recommendations regarding an international protection mechanism.”

The Palestinians and their supporters asked an emergency meeting of the UN General Assembly. Arab and Islamic nations decided to go to the 193-member assembly, where there are no vetoes, after the U.S. vetoed virtually the same resolution in the Security Council on June 1.

Since March 30, scores of Palestinians have been killed by Israeli forces in demonstrations largely organized by Hamas along Gaza’s border with Israel.