You Are Here: Home → Two Million People Are Imprisoned for 15 Years. The New Barrier Will Remain There Forever

Two Million People Are Imprisoned for 15 Years. The New Barrier Will Remain There Forever 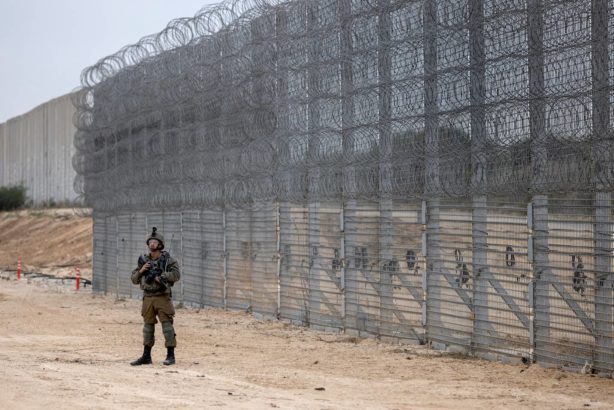 An Israeli soldier next to the newly completed barrier along the Israel-Gaza border.Credit: Tsafrir Abayov,AP (photo source)

Only the skies of the ghetto are somehow still open, and that is in a limited fashion too. Coming soon, the next devilish invention of the defense establishment: A dome of iron, a huge ceiling over the skies of Gaza. The head of the “border and seamline” administration is already working on it…

They are celebrating inside the bunker: A new fence around the Gaza Strip was inaugurated. Fence? A terrifying barrier. All the honored guests of the Defense Ministry were invited to the “event declaring the completion of the project” – not including the leprous Benjamin Netanyahu, who holds founding shares in the project and was of course not invited. They hugged each other, the way only the old boys know how, slapped the back of “Mr. Fence,” Brig. Gen. Eran Ofir, who has the poetic title of “head of the border and seamline administration” – in a country that has no border, and barely has a seamline. Naturally, sliced-up vegetables with dips and petits fours were served as refreshments, Defense Minister Benny Gantz said the barrier was “creative,” as if it was a work of art, and everyone was delighted and bursting with pride.

After all, how is it possible not to delight in the face of the 3.5 billion shekels cast away: In other words, buried deep down in the ground, and in return for which Israel received 2 million cubic meters of concrete, 140 tons of iron and steel that will never rust, including sensors that are sensitive to any hoe used by a Hamas member, and security forever for the children living in Israel near the Gaza border – which is of course “priceless.”

They even came from Donald Trump’s America at the time to look at the wonder – the pride of Israel. Every Qassam rocket volley passed by there and saw the three concrete plants built there, the tons of cement and iron poured into the ground in a country that pays its disabled 3,200 shekels a month, and demands that they make do with this to live on, because it has no money.

While the iron and concrete monster was being buried in the earth, not even a single public discussion was held on this insane enterprise. Because what was there to discuss? Security. It’s unlikely there are even 1,000 Israelis, not including the contractors and their families, who even heard about any of it. It’s ridiculous to demand a public debate on the matter, which only brigadier generals understand, and characters like Trump are so thrilled about.

It’s exciting to see the fence now in all its glory. It can serve as a new national monument to memorialize the temporary sanity that the country has lost. A convoy of limousines will bring the official guests from abroad – directly from Yad Vashem – to view the wonder. Here is buried the sanity of Israel. Here it has buried its head as deep as possible in the sand, and here it was finally declared an insane nation. A sophisticated military state, which surrounds itself with fences that have no rival anywhere in the world, facing barefoot militias, who will never stop harassing it for as long as they are imprisoned inside the Gaza Strip. A country that invests tens of billions of shekels more in preparations for a no less crazy attack on Iran, knowing that it will never carry it out, needs a monument to sanity – and its place is on the border with the Gaza Strip.

Behind the crowded facades of the iron grilles, it is no longer possible to see what is on the other side. But no one wants to see either. There is a huge concentration camp for people there.

When the fence was built around Qalqilyah in the West Bank it reminded one of a concentration camp. Whoever dared to make the comparison was immediately condemned of course. Facing the Gaza fence, it is no longer possible to deceive anyone: This is what the fence of a ghetto looks like, of a prison, of a concentration camp. Only in Israel do they celebrate the building of a concentration camp. Only the skies of the ghetto are somehow still open, and that is in a limited fashion too. Coming soon, the next devilish invention of the defense establishment: A dome of iron, a huge ceiling over the skies of Gaza. The head of the “border and seamline” administration is already working on it. First, he will just finish with the intimidating wall being built on the Lebanese border, and then he will be free to do that too.

Two million people have been imprisoned continuously for 15 years – there has never been another concentration camp like it. The fence that was inaugurated on Tuesday is obdurate: It will remain forever. You will never be released, Gazans. After all, you don’t throw a billion dollars into the garbage.

The Bar-Lev Line was a death trap, the separation barrier has been wide open and ripped up for a long time, and no lessons have been learned. But the Israelis are celebrating. There is an abundance of security in the south, too – so much security that there is nothing left for anything else.