You Are Here: Home → When will Israel stop torturing Palestinian prisoners? 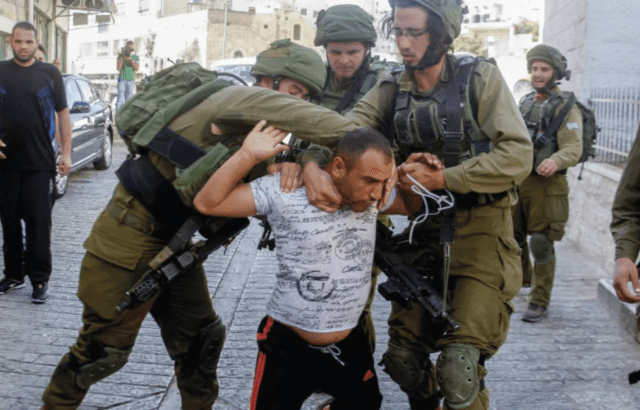 Israel is a signatory to the Convention Against Torture and yet it continues to torture Palestinians – like Mohammed El-Halabi – with impunity. El-Halabi is the director of the Gaza branch of World Vision, a Christian humanitarian aid organization. He was nevertheless subjected to 52 days of interrogation and torture.

On June 15, 2016, Israeli forces arrested Mohammed El-Halabi, the director of the Gaza branch of World Vision, a Christian humanitarian aid organisation. Mohammed was accused of funneling money from World Vision to resistance groups in Gaza. Probes conducted both by World Vision and the Australian government found no evidence of any diversion or misuse of funds.

Mohammed was nevertheless subjected to 52 days of interrogation and torture. His father, Khalil El-Halabi, testified to the torture his son endured during those months in detention: “Israeli intelligence officers placed a filthy bag over his head and hanged him from the ceiling for prolonged periods.”

Mohammed was also subjected to sleep deprivation and frequently physically assaulted by the Israeli officers who slapped him, “kicked him, especially in his genitals, and then strangled him until he felt that he was about to die … At times, they placed him in a small room and played extremely loud music until the pain in his ears became unbearable. In the summer, they would strip him naked, and then blast him with flashes of hot air. They would repeat the same process in the winter, but with cold air, instead.”

For Palestinian detainees in Israel, these experiences are unfortunately far from rare. On the 37th anniversary of the United Nations drafting of the Convention Against Torture (UNCAT), the international community must demand an end to the continuing systemic torture of Palestinian detainees by Israel.

The UNCAT was implemented on June 26, 1987, and ratified by Israel on October 3, 1991. Israel’s participation might seem surprising in light of the numerous human rights violations it has been accused of during the last few decades, including the use of torture, by well-respected human rights organisations, such as Amnesty International and Human Rights Watch.

Until 1999, torture was considered a legal means of extracting confessions in Israel, especially for Palestinian “security” detainees. However, once it was made illegal by Israel’s Supreme Court, the Israeli attorney general promised to protect any interrogator who continues to use “special means”. And indeed, special means continued to be employed as Israel made broad exceptions to this law, most notably in what they call “ticking bomb” scenarios. According to Amnesty International, “Shin Bet operatives have tortured hundreds of Palestinians, citing the ‘ticking bomb’ scenario.”

Not only do these exceptions allow these egregious, yet routine practices to continue without consequence, but they directly violate Article 2 of the Convention. Article 2, section 2, states, “No exceptional circumstances whatsoever, whether a state of war or a threat of war, internal political instability or any other public emergency, may be invoked as a justification of torture.” Israel has been criticised by the UN Committee Against Torture for its failure to meet this fixed standard.

In addition, the failure of Israeli courts to fully define what they consider torture does not exonerate Israel from its obligation towards the UNCAT’s definition of torture. According to the Convention, the term “torture” is defined as:

[A]ny act by which severe pain or suffering, whether physical or mental, is intentionally inflicted on a person for such purposes as obtaining from him or a third person information or a confession, punishing him for an act he or a third person has committed or is suspected of having committed, or intimidating or coercing him or a third person, or for any reason based on discrimination of any kind, when such pain or suffering is inflicted by or at the instigation of or with the consent or acquiescence of a public official or other person acting in an official capacity.

Common forms of physical and mental torture that are often practised by Israeli interrogators and officers, typically on Palestinians during interrogation and while in detention, include painful handcuffing, being held in painful stress positions, and sleep deprivation. There have also been reports and accounts of threats of rape, and actual rape or sexual assault of, mostly, Palestinian women by Israeli prison personnel. Former detainees have also reported being forced to watch the torture of fellow prisoners to frighten them into compliance with the interrogations, or even being threatened with the detention and torture of their family members, which has been carried out on occasion.

The physical and mental abuse and torture of Palestinian children are also disturbingly common. The advocacy organisation Defense for Children International – Palestine (DCIP) collected the ​​sworn affidavits from 752 child detainees between January 1, 2014, and December 31, 2019. These testimonies revealed that 95 percent of the children had their hands and feet bound, 72 percent were subjected to physical violence, 21 percent were subjected to stress positions, and 18 percent were detained in solitary confinement for two or more days.

On October 22, DCIP and five other rights groups were designated as “terrorist” organisations by the Israeli Ministry of Defence in a cruel effort to criminalise their advocacy for Palestinian child and adult detainees.

Many of these abuses are justified by Israel’s differentiation between “security” prisoners and criminal prisoners, as well as its broad limits for what is considered a security offence. This permits Israel to practise torture under the guise of neutralising threats to state security. Notably, “security” offences in Israel include the act of stone-throwing, the most common conviction among children.

According to a report by Human Rights Watch, “Israeli authorities have incarcerated hundreds of thousands of Palestinians for what it deems ‘security offenses’ since 1967, including hundreds at virtually any given time held in administrative detention based on secret evidence without charge or trial for renewable periods that can extend for multiple years.”

The classification of “security” prisoner or detainee is particularly significant as it denies that person certain rights typically afforded to other prisoners in Israel. For example, according to the US Department of State’s 2020 Country Reports on Human Rights, this classification exempts Israeli interrogators from filming and audio recording interrogations with security detainees, allowing abusive interrogators to evade accountability.

Though the prospect of accountability may seem bleak, there have been recent legislative efforts in the US to produce mechanisms to properly hold Israel accountable, most notably the introduction of Congresswoman Betty McCollum’s bill, HR 2590: Defending the Human Rights of Palestinian Children and Families Living Under Israeli Military Occupation Act. HR 2590 raises the issue of Israeli detention by means of military courts, and aims to condition aid on the addressing of human rights violations that regularly occur under this unjust system.

As the international community commemorates the adoption of the UN Convention Against Torture, it must also remember the many Palestinians like Mohammed El-Halabi who have been tortured by a country that time and again elides true accountability at the UN.

Zarefah Baroud is a PhD candidate at the University of Exeter’s European Centre for Palestine Studies. She currently works as the Digital Media Associate with the organisation American Muslims for Palestine. Baroud received her Master’s degree in Policy Studies from the University of Washington, where she researched American aid programmes to the Israeli military.