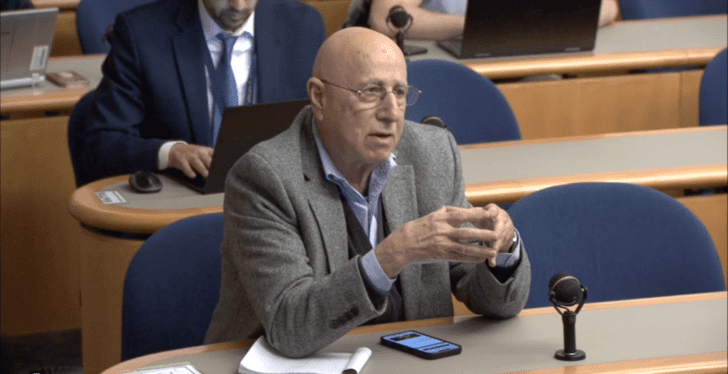 Twitter continues its censorship of Palestinians; does new owner Elon Musk need to address the algorithms and individuals still in place responsible for the censorship? (Will the Twitter Files project investigate this, despite the pervasive power of the pro-Israel lobby in Silicon Valley and beyond?)

It was big news when Elon Musk suspended the Twitter accounts of at least nine tech journalists last week (over alleged dox-ing) and then reinstated them this week after Twitter users demanded as much.

But in yet another demonstration of anti-Palestinianism in the U.S. mainstream, there has been scarcely any attention given to the arbitrary suspension of Said Arikat, a fixture at the State Department briefings as the longtime Washington correspondent for Al-Quds newspaper, a Palestinian publication. [He has also been an adjunct professor at American University in Washington, D.C.]

Arikat said he woke up on December 3 to read a notice from Twitter that his account had been “permanently suspended after careful review”. No reason was given; and despite the assurance that he could appeal the suspension if he thought the decision was wrong, Twitter has not responded to numerous letters Arikat has sent the media giant.

The only reason for Arikat’s suspension would seem to be that he is Palestinian and speaks up for Palestinians. His case has elicited no concern in the press. Let alone efforts to discover the pretext for the action.

Al-Quds is clearly being targeted as a Palestinian source. Today there is news that Facebook has shut down the official page of the Al-Quds newspaper.

In recent days Said Arikat has been smeared in the Zionist press as “anti-Israel” because of his questions of U.S. policy at State Department briefings. A month ago, the Jerusalem Post attacked Arikat as a supposed propagandist and conceded that he has wide influence on social media.

Arikat’s last action on twitter was a retweet on December 2 of a tweet by Dana Ben-Shimon, the Palestinian affairs correspondent for a Zionist newspaper, Israel Hayom, about what Palestinians were describing on social media as the “Cold Blooded Execution” of an unarmed man, Ammar Mufleh, 23, in Huwara south of Nablus by Israeli forces during an attempted arrest. The killing has rightly drawn international outrage.

Arikat’s suspension is outrageous and unfair. He has retweeted news items thousands of times in recent years without incident. As anyone who has followed his questions at the State Department and his tweets and writings and appearances knows, the 74-year-old is a courtly and soft-spoken reporter (formerly the spokesperson for the United Nations in Iraq) with a point of view reflecting the interests of the Palestinian community, particularly Jerusalem.

At this website, we rely on Arikat to raise important human rights issues with the State Department. Otherwise, State would often face no scrutiny whatsoever for its unbreakable support for Israel. Like when Arikat stood up for Shireen Abu Akleh after her killing last May.

“As bad as Twitter is, I think it’s been positive for the Palestinian people,” Arikat says.

December 2, Arikat’s last day on Twitter, was unremarkable. As is customary, he retweeted a number of tweets he found newsworthy, including comments by Peter Beinart, Noura Erakat, Benzion Sanders of Breaking the Silence, and citations of Arikat’s own article that day (on the pillorying of UN special rapporteur Francesca Albanese over her former criticisms of the Israel lobby). He went to bed that night after retweeting the execution tweet by Dana Ben-Shimon.

Arikat also says that his DM’s were hacked in the last month, and some people received DMs purporting to be from him that were not.

As a dean of State Department reporters, who has been in that briefing room for more than 20 years, Arikat tells me that several mainstream reporters have reached out to him in sympathy, but none has actually done anything to publicize the outrage. Hey folks– let’s put our shoulders to the wheel, this is a no-brainer.

P.S. Arikat’s suspension came up at a State briefing on Dec. 16. Spokesperson Vedant Patel was critical in a nuanced manner of the tech journalists’ suspensions by Twitter. “It is certainly difficult to square how these removals are consistent with promoting free exchange. But again, social media companies make their own independent decisions on content moderation, and I’m just not going to speak to those actions.”

Arikat interjected, “By the way, they suspended me without explanation.”

Patel repeated the boilerplate: “Our support for free speech and freedom of the press is well documented.”