You Are Here: Home → To Jews, from a rabbi raised in South Africa: “tell the truth – Israel is apartheid”

To Jews, from a rabbi raised in South Africa: “tell the truth – Israel is apartheid” 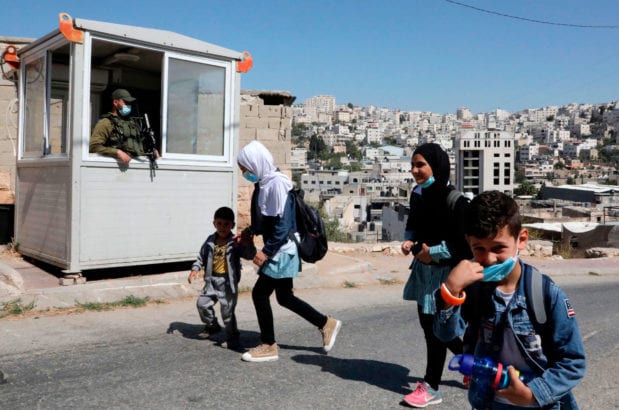 Another Jewish leader acknowledges: Israel is an apartheid state. (Pictured: Palestinian children pass in front of an Israeli checkpoint as they walk to their house in Al-Shuhada Street, which is largely closed to Palestinians, in the city center of the West Bank town of Hebron, on September 24, 2020.)

A rabbi with South African roots recalls the moment he realized that Israel’s system is “apartheid.” He describes his struggle to release his idealistic view of the Jewish State, and encourages Jews to practice “moral clarity” regarding Israel – without which it is impossible to find a way forward.

A few weeks ago, the major Israeli human rights organization B’Tselem issued the report “A Regime of Jewish Supremacy From the Jordan River to the Mediterranean Sea. This is Apartheid.”

The report contains vital, ground-breaking analysis, and the Israeli government immediately moved to censor the group. And yet, there has been almost no discussion of the report’s findings in leading U.S. media or among mainstream U.S. Jewish groups that for decades have ignored egregious human rights violations committed by Israel against the Palestinians.

When I first heard that B’Tselem was stating matter-of-factly that Israel and the lands it occupies constitute an apartheid system, I immediately flashed back to 2008, to the moment when that truth became clear to me when I led a Rabbis for Human Rights-North America (Truah) trip to Israel and the Occupied West Bank.

We arrived in Hebron. Michael Manikin, a leader with the Israeli human rights group Breaking the Silence, gestured to Shuhada Street, the street our group was about to walk down, and told us it was a “sterile street” — a street forbidden to Palestinians. Only Jews and other tourists were permitted to walk down the street.

In South Africa, as a student at the University of Cape Town, I had fought against Apartheid. I worked on issues of economic justice for domestic workers and founded and edited a Jewish student newspaper dedicated to ending Apartheid. And throughout my anti-Apartheid activism, Israel was always a central part of my Jewish identity: I was a committed, progressive Zionist.

Creating a just, democratic Israel that reflected the highest moral values of Judaism was — and remains — a core commitment of my spiritual/moral life. For several decades I had actively supported various human rights groups in Israel. In 2003, I co-founded Rabbis for Human Rights-North America and was its first executive director.

Over decades, in tours and activism on the West Bank with organizations like The Israeli Committee Against House Demolitions, I had witnessed disturbing realities that impacted me profoundly: the demolition of Palestinian homes, the expropriation of Palestinian land for Jewish settlements, olive orchards uprooted by settlers, and Palestinians evicted from homes in Jerusalem that they had owned for generations.

These experiences were so shocking that, if I hadn’t seen them with my own eyes, I would never have believed they were true. These experiences reminded me of very similar injustices that I had seen in South Africa.

And it was the “sterile street” that pushed me over the edge.

No more denial: Israel IS an apartheid state

In international human rights law, apartheid is defined as “a regime that uses laws, practices and organized violence to cement the supremacy of one group over another.” I had grown up in South Africa, and what I was witnessing in Hebron and across Israel and the land it occupies, was also apartheid – a system of domination and control that systemically privileges Jewish lives over Palestinian lives.

At that very moment, when I walked down a street stripped of Palestinians, I decided that I would never again avoid using the word “apartheid” to describe Israel’s policies against Palestinians. I know what apartheid is, and I was seeing it in front of me.

For years, some family members and dear friends had suggested that I speak about “systemic inequality and discrimination” in Israel. If I used the word “apartheid,” they said I would risk alienating other Jews. I had heeded that advice, even though Palestinian human rights organizations had consistently demonstrated that the Israeli government was implementing apartheid in its human rights violations against Palestinians. I had heeded that advice, even though I had witnessed atrocity after systemic atrocity against Palestinians.

In 2008, standing in the middle of Hebron, I realized that my unexamined prejudice against Palestinians had prevented me from acknowledging the truth Palestinians had been saying for decades: Israel was an apartheid state.

At that moment in Hebron, I felt an inner determination to name what I saw as apartheid. We, the Jewish people, must tell the truth. We can no longer cover up the shocking systemic discrimination and oppression of the Palestinians by the State of Israel – a state that relies on our support and acts in our names and in the name of our tradition.

Since 1989, B’Tselem, the Israeli Information Center for Human Rights in the Occupied Territories, has rigorously documented the many ways Israel violates the basic human rights of Palestinians in the occupied West Bank and Gaza: through land confiscation, killing of Palestinians by security forces or settlers, forcible transfer of Palestinians, restrictions on movement, torture and abuse in interrogation, and administrative detention. It also reports on violations by Palestinians against the rights of Israeli civilians.

B’Tselem’s report on apartheid challenges what analyst Nathan Thrall terms the “separate regimes delusion” — the idea that Israel within the Green Line is a democracy that is somehow fundamentally different from its “temporary” military occupation of the Occupied Territories that has existed for more than 50 years.

The report argues that over time the distinction between the two areas “has grown divorced from reality.” East Jerusalem has been annexed and the West Bank has been annexed in practice. “The entire area between the Mediterranean and the Jordan River is organized under a single principle: advancing and cementing the supremacy of one group — Jews — over another — Palestinians.”

The report describes how Israel systemically privileges Jews over Palestinians: permitting immigration for Jews only; appropriating land for Jews while crowding Palestinians in enclaves; restricting Palestinian’s freedom of movement; and denying Palestinians the right to political participation. The report also points to the 2018 nation-state law, which establishes “Jewish settlement as a national value” and enshrines the Jewish people’s “unique” right to self-determination to the exclusion of all others.

Using the word apartheid to describe Israel is immensely distressing for many Jews, like me, who were raised to view Israel as an essential part of their Jewish identity. For liberal Jews, belief in the centrality of Israel is often far more important than Jewish religious practice or belief. Israel is seen as a democratic Jewish state that provided a secure national home for Jews after the catastrophe of the Holocaust and centuries of discrimination in Christian Europe.

The accusation of apartheid is the antithesis of the liberal vision of Israel. In the past, those who have dared to use the word “apartheid” have been attacked mercilessly, labeled as “antisemites.” Indeed, the International Holocaust Remembrance Alliance’s working definition of antisemitism, promoted by Israel, includes accusing Israel of racism. [NOTE: read more on the IHRA working definition of antisemitism here.]

In 2006, when President Jimmy Carter, published his book, Palestine: Peace or Apartheid? he argued that Israel had to make a fateful choice, either a negotiated two-state solution that would end the Occupation, or the expansion of Jewish settlements which would inevitably lead to a one-state solution of an apartheid state, where there are two sets of laws, one that privileges Jews and another that denies Palestinians these same rights.

B’Tselem’s report, issued 15 years after the publication of Carter’s book, confirms that Israel has chosen to foreclose the possibility of a two-state solution and chosen a system of apartheid from the Mediterranean to the Jordan River. The Israeli government has made that choice repeatedly as it built a massive infrastructure of exclusive Jewish settlements, towns and roads. This project is ongoing.

A painful, but necessary truth

Despite this reality, many liberal Jews and Jewish organizations continue to insist that a two-state solution is still possible. They argue that there is still time. They ignore B’Tselem and other Israeli human rights organizations, like they ignored Carter, and like they’ve continually ignored Palestinian voices, because they cannot face the truth that Israel has foreclosed the possibility of a two-state solution. They are unwilling to face the loss of the illusion of a just Israel — our emotional and spiritual attachment to the idealized Jewish state.

I’m aware how painful a loss this is for many Jews. I spent years in Israel, and I have a deep love of the Jewish and Hebraic culture in Israel. I have maintained strong bonds with friends and family in Israel. However, I also know that I cannot use my fear of loss to deny the accountability of the Israeli government in harming Palestinians.

I support a thriving Jewish community and culture in Israel but it must be in the context of a state that ensures equality for every person, Palestinians and Jews. We must envision a new reality of one state with equal rights for all and where Jewish and Palestinian culture are treasured. [NOTE: read about the One Democratic State solution here.]

We live at a time when many white American Jews are facing the truth about white supremacy, the systemic racism in the United States present from the very beginning of the country. Many American Jews and Jewish organizations are engaged in anti-racist education and activism. Facing the truth about systemic injustice in one’s country is painful, yet many liberal white Jews have committed themselves to this important task.

Moral clarity about apartheid in Israel

The moral dilemma we face is whether we have the courage to do the same work in relation to Israel. I believe it is necessary and possible for us to do so. As Hagai El Ad, the director of B’Tselem has said, “Calling things by their proper name — apartheid — is not a moment of despair; rather is moment of moral clarity, a step on a long walk inspired by hope. See the reality for what it is, name it without flinching — and help bring about the realisation of a just future.” We can and must bring about a just future for Palestinians and Jews.

People of conscience must reject apartheid in Israel just as clearly and forcefully as we reject white supremacy in the United States. This is not just a political issue for us; it is a moral/spiritual issue. The name, B’Tselem (“in God’s image”) is based on the verse in Genesis — “God created Adam in God’s image.” It is a commitment to the foundational principle of Judaism, that every human being is of infinite value, deserving of dignity, freedom, equality and justice. It is time to commit ourselves to the fulfillment of this core Jewish moral value for all people between the Mediterranean Sea and the Jordan River.

This is the only path there is to justice for all who live between the Mediterranean Sea and the Jordan River.