You Are Here: Home → The luxury of evacuation: a form of Jewish privilege based on the myth of Israeli vulnerability, while Gazans suffer and die

The luxury of evacuation: a form of Jewish privilege based on the myth of Israeli vulnerability, while Gazans suffer and die 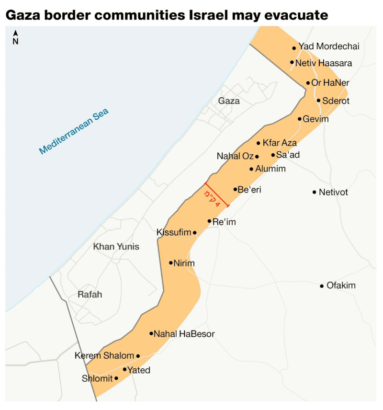 According to an Israeli military officer, “The military is preparing to evacuate civilians located up to four kilometers from the border, even at the first stage of a wider campaign.”

Evacuation is another form of Jewish privilege, based on the myth of vulnerability (Israel’s borders are fenced in and well guarded) and existential threat (Israel has one of the most powerful armies in the world, and is in no danger of annihilation).

The Gaza Strip lives under a brutal, illegal, 11+ year blockade. Its people are locked inside its borders (not for nothing Gaza has been for years called “the world’s largest open air prison”); they have no power except the power to resist.

Gazans nonviolently protest every Friday and for this they are answered with death by sniper – over 160 times since March. One Gazan sniper killed an Israeli and there was hell to pay.

Gazans shoot rockets in the general direction of their adversary as a form of symbolic resistance; the adversary drops non-symbolic bombs from fighter jets.

The last time a Gazan rocket killed an Israeli was in 2014. The last time an Israeli bomb killed a Palestinian was probably today – no matter what day it is. The date of this writing is August 13th, and at least 13 Palestinians have been killed so far this month.

Based on Gaza’s actions, Israel’s leaders have gotten it into their heads that Gaza needs to be severely punished for the rocket fire. This means warplanes, shelling, damage that can’t be repaired (the blockade keeps building materials out of the Strip), injuries that can’t be treated (the blockade even restricts medical supplies), and of course deaths that can not be reversed (mostly civilian, if history repeats itself).

In preparation for a possible military campaign – with subsequent rain of (symbolic) rockets from Gaza – Israel is considering evacuating those Israeli communities nearest the Gaza border.

These communities have enjoyed a population boom of sorts in recent years, in spite of being in fairly easy range of Hamas rockets. Air raid sirens, bomb shelters, Iron Dome missile interceptors, and evacuation plans – a symbolic sense of security against a symbolic threat – are all built into the program.

Many of the newest residents explain that they’ve come to help secure Israel’s “most vulnerable border.”

Israel’s “most vulnerable border” becomes more vulnerable, not less, by the presence of more people – but this is useful to the Israeli government: the more neighborhoods, playgrounds, and houses near the Gaza border, the greater the chance that a rocket will cause regrettable damage, injury, or death – triggering more devastating airstrikes. Israel needs only the slightest excuse.

The unsuspecting Israelis, those volunteer civilian defenders of their country, didn’t recognize the subtext of that noble call: “Your job is to look after our border, and when the rockets rain down – which they will (we’ll see to it) – you run to your bomb shelter. Our job is to avenge the terrorists who inconvenience you and cause you stress.”

The truth is, Israel has no vulnerable borders. It has built a 25-foot-high concrete wall around the West Bank, as well as a fence with advanced surveillance equipment on the border with Egypt; Israel monitors and regularly shoots at Gaza’s fishing boats in a tiny area of the Mediterranean Sea (roughly 20% of the area they were guaranteed in the Oslo Accords), and has a security fence with snipers along the whole Gaza land border; Israel also built a barrier with Jordan, with watchtowers and electronic sensors; on the border with Syria is another fence, this one reinforced by artillery and armored units (Israel does not want Syrian refugees); and Israel has a security fence on – or Lebanese leaders would say near – the border with Lebanon (the disputed area happens to contain oil and gas reserves). The Jewish State’s border is virtually impervious to uninvited guests.

Here’s another truth: the people of Gaza are not bent on swarming over the border into Israel to kill all the Jews.

The organizers of the Great March of Return have been promoting a nonviolent, symbolic, grassroots demonstration against the blockade and the theft of Palestinian land in 1948; Israeli leaders prefer the never-ending “existential threat” explanation, which allows for snipers.

But Gazans are not interested in a violent takeover. (They are also smart enough to know what snipers are for, and that if you somehow manage to get past the snipers, there are millions more IDF soldiers ready to kill you.) Only a handful of Gazans have tried to breach the fence since the March began. Let’s check a few of the stories to see what happened:

As for the “terror tunnels,” these too have been proven to be a non-starter in the existential threat arena. For all the hype they’ve received (and all the money poured into anti-tunnel and even anti-underwater tunnel technology), tunnels were used by Gazans to capture 1 IDF soldier in 2006 (he was later released), 3 times in July 2014 (in the 1st incident, all 13 Gazans were killed – their objective was unknown; in the 2nd, a group of Gazans killed 4 IDF soldiers and another group was killed while waiting to ambush an IDF army patrol; in the 3rd, 5 IDF soldiers were killed), and in August 2014 2 IDF soldiers were killed.

All of the tunnel casualties were military, all of the deaths were during wartime. No civilians were ever touched.

No one has plans to invade Israel and put everyone to the sword. Palestinians still (amazingly) believe in justice – they will continue to appeal to the United Nations and the International Criminal Court.

But Palestinians still believe in – and have a basic human right to – resistance. So they will continue to march; they will continue to send rockets into the air – most likely with little injury or damage. Fortunately for Israelis living near the border, there is always the luxury of evacuation.

For Gazans, the only luxury is that of having the moral high ground.