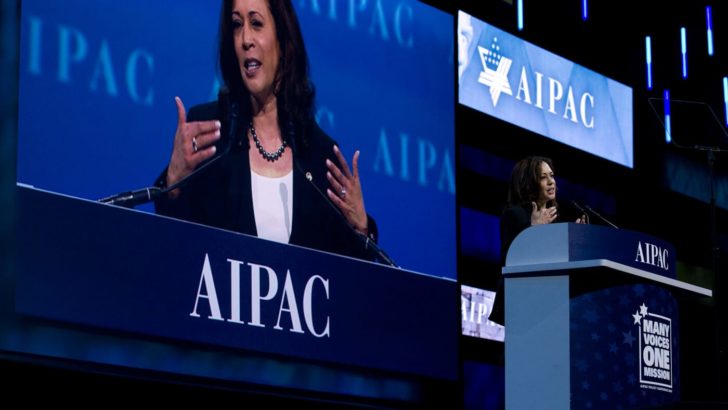 Kamala Harris has sought to publicly cast herself as progressive while privately catering to the Israel lobby.

IF AMERICANS KNEW joins CODEPINK in outrage against Candidate Kamala Harris’ co-opting of the Selma to Montgomery march to justify her support for Israel. Let’s tell her this is offensive and unacceptable.

The day has been coined Bloody Sunday — on March 7, 1965, Alabama state troops used billy clubs and tear gas to brutally attack unarmed black protestors marching from Selma to Montgomery for civil rights. Seeing the violence and hatred spread across print and televised media galvanized people across the nation to join those marching and demand passage of the Voting Rights Act to prohibit racial discrimination at the ballot box.

Last year, U.S. Senator and 2020 hopeful Kamala Harris spoke at the American Israel Public Affairs Committee (AIPAC) annual conference. She told a group of over 3,500 students that the famous Selma to Montgomery march for equality was one event which inspired her to support Israel and the US-Israel alliance.

Sen. Harris sees the US civil rights struggle as a reason for helping Israel maintain its systems of occupation and apartheid? What??? Send Sen. Harris a message now that unquestioned support for Israel — as AIPAC demands — is an affront to all that the civil rights movement fought for and is repulsive from a presidential candidate. Tell her to immediately reverse course on this important issue and refuse to attend this year’s AIPAC conference.

2018 wasn’t  Harris’s first appearance at AIAPC. Nor was it her only show of support for Israeli apartheid. The Senator also spoke at AIPAC in 2017 and later that year – with her 2020 run for the presidency in mind — traveled to Israel where she met with prime minister and war criminal Benjamin Netanyahu. 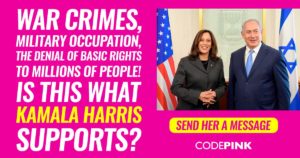 Netanyahu so loves to embrace racism and hatred that — gunning for his own reelection — he recently built a political alliance with the Jewish KKK. The Otzma Yehudit (Jewish Power) party calls for the expulsion of “all enemies of Israel” (aka Palestinians), full annexation of the West Bank and Gaza, and Jewish sovereignty over Jerusalem. The party opposes all intermarriage or intermingling between Jews and Palestinians and openly promotes violence as a way to achieve its goals.

Netanyahu’s joining with the Jewish Power party was so appalling that almost every major Jewish organization in the U.S. expressed condemnation. Even AIPAC joined with the  American Jewish Council (AJC) statement calling the views of Otzma Yehudit “reprehensible.” Although they expressed tepid disapproval, AIPAC is still having Netanyahu speak at its March 24-26 annual conference.

CODEPINK calls on all presidential candidates to reject hate and violence, so we will be particularly appalled if Sen. Harris joins Netanyahu in speaking at AIPAC this year. Join us in calling on Kamala Harris to reject Netanyahu and AIPAC. Tell her to refuse to attend the March 24-26 conference.

The UN Human Rights Commission just released a report stating that Israel has likely committed crimes against humanity in Gaza — intentionally targeting children, medics, and journalists with live ammunition. As such, Israel’s Prime Minister Netanyahu is guilty of war crimes. If Sen. Harris speaks alongside him at AIPAC she is complicit. Send her an email now: we need a President for Peace, not one who upholds Israeli apartheid.