You Are Here: Home → Attacks on Gazans continue inside illegal Israeli-imposed ‘buffer zones’ 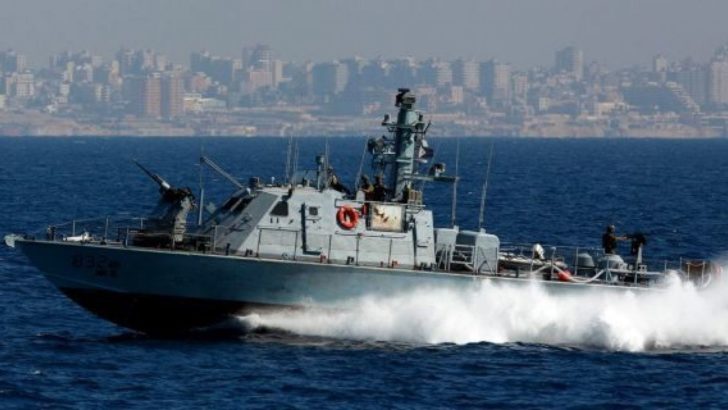 An Israeli Navy vessel patrols along the shores of the Gaza Strip in the Mediterranean Sea. (Reuters)

In the years since Israel’s “disengagement” from Gaza, the Israeli-imposed buffer zones have fluctuated wildly – between 100 and 1,500 meters on land and 3 and 9 nautical miles at sea, in violation of international humanitarian law. This report also details February 2019 attacks and other human rights violations against Gazans.

The term “buffer zone” in land and at sea is used for land and sea areas, which were unilaterally and illegally declared by Israeli forces as areas with no access along the eastern and northern borders and in the sea of the Gaza Strip following the Israeli Disengagement Plan in 2005.

In violation of the provisions of the international humanitarian law, the Gaza Strip’s population are denied access to their property in the “buffer zone” in land while the fishermen are prevented from sailing and fishing in the “buffer zone” at sea. The area  of the buffer zone vary from time to time according to the Israeli forces declarations, without taking in consideration the international law that bans any changes to the occupied territories. According to Israeli forces instructions, the “buffer zone” extends to an area ranging between 100 to 1,500 meters in some eastern land borders, while ranges between 3 to 9 nautical miles in the Gaza Strip sea. 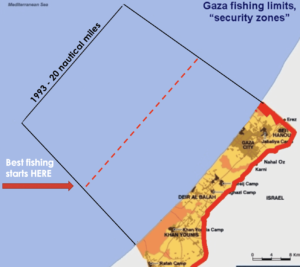 Israeli forces expanded the fishing area in the Gaza Strip from 3 to 6 nautical miles following the ceasefire agreement post November 2012 Israeli offensive. However, there is conflict over the Access Restricted Area (ARA) in land, which increases the risks endured by the Palestinian civilians.

In a statement on his official website, the Israeli Coordinator of Government Activities in the Territories (COGAT) declared that fishermen could now access the sea up to 6 nautical miles offshore, and that farmers could now access lands in the border area up to 100 meters from the border fence. However, both references have since been removed from the statement, which obviously indicates the Israeli forces retreat of the abovementioned ceasefire.

Following the latest Israeli offensive on the Gaza Strip in 2014, a ceasefire agreement between Israel and Palestinian armed groups was brokered by the Egyptian government, which allowed fishermen to sail up to 6 nautical miles. However, the Israeli naval forces have not allowed fishermen to sail up to this limit. The Palestinian Centre for Human Rights (PCHR) observed that all the Israeli attacks have taken place within less than 6 nautical miles.

On 07 March 2015, the Israeli naval forces declared via loud speakers that the allowed fishing area reduced to 4 nautical miles and warned Palestinian fishermen from approaching this area along the Gaza Sea.

On 01 April 2016, the Israeli authorities expanded the fishing area from 6 to 9 nautical miles between the area from Gaza valley to the southern Gaza Strip, while denying access to more than 6 miles in the other areas.

On 03 May 2017, the Israeli authorities allowed fishermen to fish up to 9 nautical miles, instead of 6 nautical miles in the Sea in Gaza City and the northern Gaza Strip.

According to field updates followed up by PCHR, the Israeli occupation forces have escalated their attacks against the Palestinian civilians, including farmers and fishermen, and prevented them from safe and free access to their lands and fishing areas. This constitutes a violation of their rights according to the international human rights standards, including their right to security, personal safety and protection of their property, their right to work, the right to adequate standard of living, and the right to the highest attainable standard of health.

Enforcing the “buffer zone” through the use of live fire which has often led to direct targeting of civilians, is a war crime, where killings under these circumstances constitute a wilful killing in grave violation of the Geneva Conventions of 1949.