You Are Here: Home → Shams: at 11, he’s not too young to be beaten & traumatized by Israeli soldiers

Shams: at 11, he’s not too young to be beaten & traumatized by Israeli soldiers 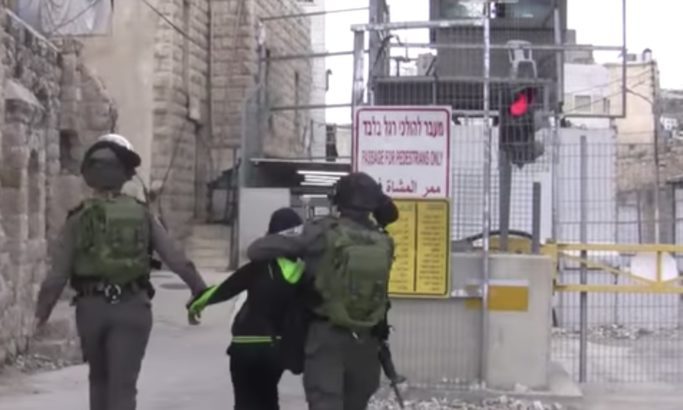 The detention of children is commonplace for Israeli soldiers – Shams is one of many to experience this violence. (Pictured: one of four Palestinian boys detained in Hebron in one afternoon on December 5, 2018 - 3 of them were under the age of 14.) (B'Tselem (screenshot))

Shams was just playing football, but for Israeli occupation soldiers that’s enough to detain, arrest, beat, and threaten to kill an 11-year-old child – and it’s not just a fluke: CPT suggests that Israel is trying to “traumatize a generation.”

His name is Shams which means “the sun.” He is 11 years old, in the sixth grade at school, a Palestinian kid living in the old city of Hebron. He likes to play football, read stories, play computer games, and take care of his pet bird, a gift from his father.

Shams likes to meet his friends and play football near the famous Al-Sunnah Mosque—there is no other place to play in the old city because the houses are built very close to each other. Near the mosque, there is a small place to play, but behind the mosque walls are the Beit Haddassah settlement and the military base.

While Shams was playing football near the mosque with his friends, six Israeli soldiers came to the area claiming that the boys were throwing stones into the Beit Hadassah settlements.

When Shams and his friend saw the soldiers running toward them, they were scared and ran inside the mosque. The soldiers followed them and detained them for 30 minutes outside of the mosque. During that time, the soldiers also stopped any child that passed by the mosque, demanding to know what they were doing in the area.

They took Shams and his friends to the Beit Hadassah settlement where they were detained for three hours. Three hours felt like three days for Shams.

CPT members went to Shams’s house to meet with him after he was released, and he described what happened while he was detained.  The soldiers hit Shams in the chest with a gun and slapped him many times, hitting him on the shoulders, head, and back.

Then they put him in a room with two other soldiers. One soldier had a chainsaw and told Shams to put his arms on the desk.  He then asked Shams who threw the stones into the settlement, threatening, “if you don’t tell us, I will cut your arms off.”  One soldier would turn on the chainsaw and try to intimidate Shams while the second soldier would try to calm the first down.  It was a game to push him to talk.

After Shams was released and returned home, he had nightmares about the soldiers and didn’t leave his house for 10 days.  He also begged his father not to go out, fearing that his father would also be arrested. Shams worried that the soldiers would come back for him and he wanted his father with him if that happened.

Shams doesn’t feel safe and he can’t sleep alone in his room.  He no longer plays with his friends.  His father continues to ask his son to go out and play, but he refuses. His father has tried to bring him to visit family but Shams is too afraid.

The trauma is emotional, but also physical. Shams has pains in his chest. His father has taken him to the doctor many times, but the doctor said he is suffering from anxiety and trauma, and suggested mental health counseling.

Shams is one of many children in Hebron that have experienced this kind of trauma from soldiers. Locals have recognized that soldiers are targeting children more now, in an attempt to traumatize a generation.

CPT places teams at the invitation of local peacemaking communities that are confronting situations of lethal conflict. These teams support and amplify the voices of local peacemakers who risk injury and death by waging nonviolent direct action to confront systems of violence and oppression.

FURTHER READING ON THE ISRAELI PRESENCE IN THE PALESTINIAN CITY OF HEBRON: