You Are Here: Home → Israeli Soldiers Kill 23-year-old Near Ramallah 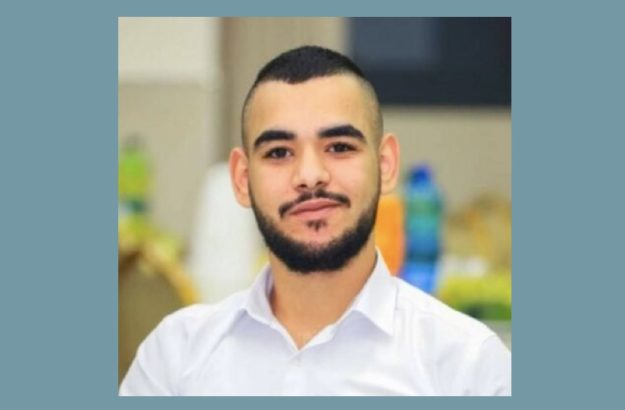 Lethal force was used against yet another Palestinian – Mohammad Abu Jom’a. This is the 12th Palestinian killed by Israeli soldiers this month; one Israeli was also killed during that time.

On Thursday evening, Israeli soldiers killed a Palestinian in Modi’in Illit illegal colony, built on stolen Palestinian lands west of Ramallah, in the central part of the occupied West Bank.

The slain Palestinian has been identified as Mohammad Osama Abu Jom’a, 23, from the at-Tour town in occupied Jerusalem.

Israeli sources claimed that the Palestinian mildly injured eight Israeli colonizers after he allegedly “lunged at a car, tried to open its doors and attacked the Israelis with a knife and pepper spray.” (Jom’a’s family dispute this claim and give a different account of the incident – see below.)

Israelis alleged that two “Israelis were stabbed and suffered light wounds, and six were maced with pepper spray before an off-duty police officer who happened to be in the area fatally shot the Palestinian.”

Israeli medical sources said the injured Israelis were all treated by medics at the scene due to their mild wounds.

The man only referred to a Major D. stated that he was in his car with his wife when the Palestinian opened the door and “tried to stab them,” he also presented his version of the “sequence of events” that led to him fatally shooting Mohammad.

The officer claimed that, after the Palestinian tried to open the car’s door to stab his wife, he stepped on the gas and sped away to a distance of about 20 meters before getting out of the vehicle and heading to Mohammad.

The officer also claimed that he only drew his weapon and fired several shots when he saw the Palestinian running toward him and alleged that Mohammad continued to run in his direction before he fired more rounds at him.

The Border Police commissioner, Amir Cohen also “thanked the officer” for his “professionalism and for saving lives….”

The family of the slain Palestinian, Mohammad Osama Abu Jom’a, denied the Israeli allegations and said that Mohammad and one of his relatives worked at the colony and added that an argument broke out between Mohammad and his employer before a colonizer used pepper spray, leading to a scuffle and the subsequent fatal shooting.

They added that no knife or sharp objects were involved, and that Mohammad’s life could have been spared if the off-duty officer in plain clothes did not elect to use his firearm and used other means to defuse the situation.

OTHER PALESTINIAN DEATHS THIS MONTH AT ISRAELI HANDS: