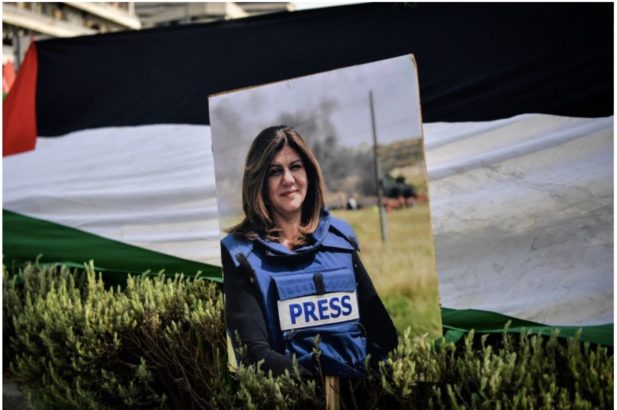 A portrait of slain Al Jazeera reporter Shireen Abu Akleh is pictured during a demonstration in front of the Israeli embassy to support Palestinians, in Athens, Greece on May 16, 2022 (Louisa Gouliamaki/AFP)

Yet another significant report points to Israeli guilt in the death of Shireen Abu Akleh: new forensic analysis shows she was “deliberately and repeatedly targeted” by an Israeli military sniper taking “precise and careful aim.” Palestinians filing at the ICC state that her assassination was in the context of wider “systematic targeting” of Palestinian journalists by Israeli occupation forces.

Shireen Abu Akleh was “deliberately and repeatedly targeted” by an Israeli military sniper while reporting on an IDF raid last May, at the entrance to Jenin refugee camp – by a sniper taking “precise and careful aim.”

This is among the previously unreleased findings of a joint investigation by UK-based Forensic Architecture and the Monitoring and Documentation Department of the Palestinian human rights group Al Haq, presented this morning in front of the International Criminal Court in the Dutch capital, The Hague.

These findings, based, in part, on previously unseen footage recorded by an Al Jazeera camera person on the scene, were disclosed to a small group of reporters following the submission of a complaint to the ICC by lawyers for the family of Abu Akleh and two Palestinian journalists standing beside her that day.

“All shots were fired above the shoulders and intended to kill.”

Forensic Architecture, based at Goldsmiths University of London, specializes in “spatial reconstruction of sites and scenes of state violence.” Their analysis of Abu Akleh’s death — described as a “targeted killing” — is based on multiple videos recorded by Palestinians, along with other evidence.

According to the FAI report, read from a prepared statement, “there were no other persons present between [Abu Akleh and her colleagues] and the convoy of military vehicles at the time of the incident,” “no other shots … came from the vicinity of the journalists,” and “the only shots fired in the three minutes preceding the shooting of Shireen came from the IOF’s position.”

This morning’s FAI report also reveals that, while attempting to provide aid to the veteran Al Jazeera journalist, “a civilian on the scene was shot each time as he attempted to reach her,” and, “as a result, Shireen was deliberately denied medical attention by [Israeli Occupation Forces] after having been shot.”

Field of vision analysis simulating what the IDF sniper would have seen “shows that the journalists were clearly identifiable as such,” the FAI concludes.

“The shots were only fired when journalists and later a civilian were within the line of sight with the IOF shooter.”

Appeal to the ICC

None of these forensic details were contained in the complaint delivered to the ICC this morning. Rather, today’s submission, filed by a pair of lawyers with the UK firm Doughty Chambers, summarizes eyewitness accounts and provides legal arguments for undertaking a full investigation of Abu Akleh’s murder.

“Reasonable grounds [exist] to suspect that war crimes have been committed,” in the context of wider “systematic targeting” of Palestinian journalists by Israeli occupation forces, today’s ICC filing states.

The 25-page complaint was handed to an ICC staff member who did not identify themself to the legal team – Doughty Chambers barristers Jennifer Robinson and Tatyana Eatwell. Neither Chief Prosecutor Karim Khan nor Deputy Prosecutor Nazhat Shameen Khan (no relation) were present.

Today’s complaint was filed on behalf of Shireen Abu Akleh’s brother, 59-year-old Anton Abu Akleh, and two of Shireen’s colleagues — Palestinian journalist Ali Samoudi, shot in the shoulder while standing near Abu Akleh that day, and Shatha Hanaysha, a 29-year-old reporter for the web news site Ultra Palestine, and a contributor to Mondoweiss, who was also standing close to Abu Akleh when an Israeli sniper gunned her down.

Lawyers hope to meet with the Office of the ICC Prosecutor in “the coming weeks” to present forensic evidence and witness statements leading to the prosecution of those responsible for the death of Shireen Abu Akleh and other Palestinian journalists, Tatyana Eatwell told Mondoweiss.

“We are offering our cooperation with them, in order to assist them in this investigation.”

“This case, and the other cases of journalists killed or maimed by Israeli forces, fall squarely within the court’s jurisdiction and warrant investigation by the International Criminal Court,” Tatyana Eatwell told journalists gathered at the ICC this morning.

“There is little to no prospect of any criminal investigation into these matters by the domestic authorities.”

A broader complaint drafted by the Doughty Street Chambers team, handed to the ICC on April 16 — three weeks before Abu Akleh’s killing — asked the ICC to investigate the “systematic targeting, maiming and killing of journalists and destruction of media infrastructure in Palestine.”

Four Palestinian journalists were named in the April complaint. Yaser Murtaja and Ahmed Abu Hussein were shot by Israeli snipers in April 2018 while reporting on Great March of Return protests in Gaza. Both died of their wounds. Nedal Eshtayeh and Muath Amarneh lost eyes while covering protests in 2015 and late 2019, respectively. All four were wearing press vests when shot.

The April complaint and today’s submission were filed under Article 15 of the Rome Statute, mandating the ICC’s Chief Prosecutor to initiate investigations on his own initiative (proprio motu) if a reasonable basis for doing so exists. In theory, permission to proceed in earnest must then be granted by the Court’s Pre-Trial Chamber.

Chief Prosecutor Karim Khan’s office has acknowledged receipt of the April complaint, but has not indicated whether or not the complaint will be investigated, Tatyana Eatwell, told Mondoweiss.

That said, both complaints are germane to the wider Palestine investigation announced in early March 2021 by then-Chief Prosecutor Fatou Bensouda.

In Bensouda’s words, the Palestine investigation – one of seventeen “situations” currently under investigation by the ICC — covers “all facts and evidence relevant to an assessment of whether there is individual criminal responsibility under the Statute.”

“The Prosecution will be able to expand or modify the investigation,” Bensouda wrote, “so long as the cases identified for prosecution are sufficiently linked to the situation. In particular, the situation in Palestine is one in which crimes allegedly continue to be committed.”

ICC investigations are aimed at identifying “the most notorious alleged offenders or those alleged to be the most responsible for the commission of the crimes.”

Israel has not identified the Israeli sniper who gunned down Shireen Abu Akleh and injured Ali Samoudi on May 11, nor their unit or commanding officer.

Following the US government’s announcement of its examination of the bullet that killed Shireen Abu Akleh, the Doughty Street legal team asked to be provided access to these and other findings. Similar requests were presented to the government of Israel and the Palestinian Authority. No information has been provided.

In its February 2019 report to the Human Rights Council, the Independent International Commission of Inquiry on the Protests in the OPT concluded that there were “reasonable grounds to believe that Israeli snipers shot journalists intentionally, despite seeing that they were clearly marked as such.”

“There’s a whole culture of impunity within the Israeli security forces for these acts. And that is really why it’s very important that the International Criminal Court as an independent international authority investigates these cases,” Tatyana Eatwell told Mondoweiss shortly after the filing of her and fellow barrister Jennifer Robinson’s April filing to the ICC.

“The Biden Administration so far has failed to launch an investigation, in spite of calls from over eighty members of the US Congress to do so,” said Abu Akleh.

“In addition to being a US citizen, Shireen was also a proud Palestinian who was killed in cold blood by an Israeli soldier. It seems that the reason her case has not been a priority for the US government is because who she was and who she was killed by. There is no mystery regarding what happened to Shireen. Except for the actual name and identity of her killer … We need a US and ICC investigation to hold Israel accountable … our family shouldn’t have to wait another day for justice.”

David Kattenburg is a university science instructor and radio/web journalist based in Breda, North Brabant, the Netherlands.

FURTHER READING ON ISRAEL’S WHITEWASHING OF ITS VIOLENCE:

FURTHER READING ON ISRAEL AND ICC: