You Are Here: Home → Santa Claus in Palestine 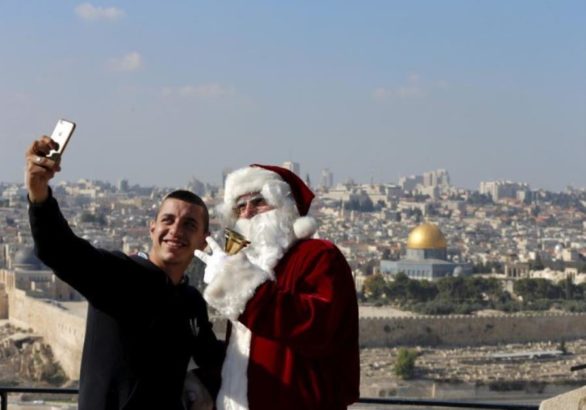 Santa Claus visits Jerusalem every Christmas. What the City of Peace needs is a few more Wise Men.

A Palestinian woman who now lives in the US recalls growing up in simpler times, without an awareness of the differences in religions. Christmastime – and Santa – were for everyone. But times have changed, and Jerusalem has changed, especially since Trump’s announcement.

Dear Ahed Tamimi, I would like to dedicate this article to you. Sending you love and solidarity on your 17th birthday, we stand with you and with all Palestinian prisoners.

I grew up in a Muslim home in Palestine. My father was a dentist, politician, community leader, and civil rights activist. My mother was a Liberal Arts professor who taught poetry and Arabic language in An Najah University.

When I was a young girl in Palestine, I grew up embracing the three Abrahamic faiths: Islam, Christianity, and Judaism. Before the first Intifada (Palestinian Uprising) in 1987, I did not realize that I was different from my friends who practiced other religions. Visiting the City of Peace, Jerusalem, every Friday with my family was my favorite thing to do. At the time, Jerusalem was open to all people. I remember running around at the Western Wall (Wailing Wall) and playing hide and seek with my brothers and sisters. As a young girl it didn’t matter whether people were Christian, Jewish, or Muslim, we were all people living in Palestine, the land of milk and honey.

My dad’s dental office was always filled with patients who spoke Hebrew and Arabic. I asked my dad once why some spoke a different language, and he told me that this was Hebrew, the language of our cousins the Jews. This is a concept that many people outside of Palestine do not understand, that Muslims and Jews are descendants of the sons of Prophet Abraham: Ishmael and Isaac. Prophet Ishmael was the forefather of Prophet Muhammad, and prophet Isaac was the father of Jacob and forefather of Moses. So, in a way, Muslims and Jews are in fact cousins dating back to the sons of prophet Abraham.

Christmas time was not viewed as a Christian holiday when I was growing up. It was a fun time of the year where our neighbors were celebrating a new year, and there was something fun we called Baba Noel (Santa Clause). Even as Muslim kids we were told that Baba Noel would come and give little kids presents. I went to visit my grandparents in the city of Nablus with my mom, and I saw a Baba Noel doll in a gift shop. I remember asking my mom to buy it for me so he would come and bring me gifts. She did, and I was so happy with my new Santa.

After the first Intifada of 1987, I remember asking my parents about visiting Jerusalem again and year after year we never went. I remember asking why we can’t visit our Palestinian capital to play and run around, but I was too young to understand politics and what had changed. Looking at my little Santa I started to think that maybe things were not as fun and simple as I had thought before.

I was able to finally visit Jerusalem during a school field trip in 1994. By then, I had gotten older and started to understand that there were differences after all between Jews, Christians, and Muslims enough to change the city that I once loved, Jerusalem. And through all of those years, I kept my little Baba Noel to remind me of simpler times when I was innocent and saw no differences between me and my neighbors.

Baba Noel was still there, even this year when I visited my family home with my three children. We visited after President Trump made his announcement about Jerusalem being the capital of Israel, and I was sad not only because I grew up believing it was the capital of Palestine, but because my young children had to grow up in a world where religious differences created so many barriers between people. Gone are the days where I could play hide and seek in Jerusalem, and where kids stories about Santa Clause bringing gifts could be the dream of a Muslim child.

Wasan Abu-Baker is an American Activist with a Palestinian Origin. She is the Vice Chair of Corpus Christi National Justice for our Neighbors in Corpus Christi,Texas, a member of ABCD New addition Team, and a staff writer for Kings River Life Magazine in the US. Wasan has also published articles in Muslim Vibes in the U. K., as well as some other newspapers. She is an educator and a teacher who loves teaching Muslim kids Islam and Arabic integrating the arts and helping them build their Islamic identity in the US. Wasan also finished her fellowship with American Friends Service Committee in California and. was on the staff of Fresno interdenominational refugee ministry that serves refugees in Fresno, California when she lived in Fresno. Wasan Earned her masters degree in Special Education and graduated from St. John Fisher College in Rochester, New York.