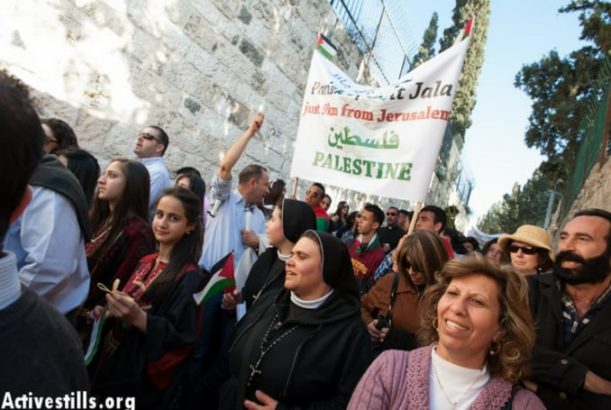 “Hosanna” means “save us,” but Israeli soldiers descended on Palm Sunday worshipers anyway, grabbing Palestinian flags out of their hands in the middle of their holy procession.

from The Palestine Chronicle

Israeli soldiers attacked Palestinian Christians during the traditional Palm Sunday procession in Jerusalem, while they were celebrating by carrying palm fronds and chanting special hymns.

The army also banned marching Palestinian Christians from carrying the Palestinian flag, and attacked those who tried to raise it. However, several people from European countries were allowed to carry their countries’ flags.

Without respect for those who have a different religion. Israeli police attack Palestinian Christians because they held the Palestinian flag during Palm Sunday. it's useless you will not be able to cancel Palestine! #Jerusalem! pic.twitter.com/hV8jCQbddR

Palm Sunday marks the start of the Holy Week that commemorates Jesus’ entrance in Jerusalem, his crucifixion and resurrection on Easter Sunday.