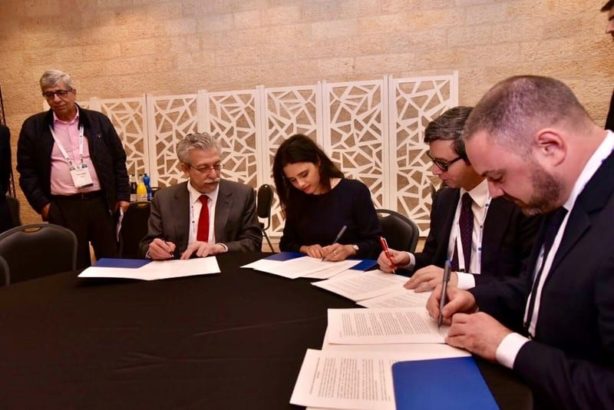 Israeli justice minister Ayelet Shaked signs a statement with three European counterparts pledging further government control of online speech, at a conference in Jerusalem, 20 March. The event was attended by a senior Facebook official days before the social network intensified its crackdown on Palestinian journalists. (via Facebook)

Facebook continues to violate Palestinian free speech, this time by shutting down – without warning – Safa Palestinian Press Agency, a major news outlet. This in spite of the great amount of anti-Palestinian incitement on Israeli Facebook accounts, including that of justice minister Ayelet Shaked. This bowing to Israeli pressure does not bode well for other social media (or for Palestinian free speech).

Facebook has shut down the page of a major Palestinian news outlet, in what appears to be a blatant instance of pro-Israel censorship.

The Safa Palestinian Press Agency reported that on Saturday its page, which had more than 1.3 million followers, was shut down without warning.

As part of its unabated campaign against pro-Palestinian content on its platform, Facebook removes the page of the Palestinian Press Agency (SAFA) today. pic.twitter.com/0jeytF12XP

According to Safa, the next day its website was hijacked and replaced with threatening statements, before the publication’s technologists managed to restore control of their site.

On Monday, Safa reported that its page on the photo sharing network Instagram, which is owned by Facebook, had also been shut down without any warning. The account had more than 70,000 followers.

This appears to be an escalation of Facebook’s persistent blocking of the accounts of Palestinian journalists and publications.

Safa reports a mix of local and international news typical of other news organizations and asserts it has done nothing to violate Facebook’s rules.

According to Safa, Facebook has in recent days shut down about 100 accounts belonging to Palestinian media and activists.

In a statement Monday, Safa managers condemned Facebook’s action as a continuation of Israel’s assault on the Palestinian people and an attempt to silence reporting about reality.

The publication urged local and international press freedom defenders to speak out against the censorship, and called on Facebook to restore Safa’s accounts.

Earlier this month, journalists in Gaza held a demonstration to protest censorship by Facebook.

In 2016, Israel made an agreement with Facebook to collaborate in monitoring what Israel claims to be “incitement” by Palestinians.

That year, Facebook apologized for disabling the accounts of several Palestinian journalists, claiming it had been a mistake.

But with the shuttering of Safa’s accounts, it appears that the targeting of Palestinian journalists continues.

The European Union also appears to be supporting Israel’s social media censorship as part of the 28-member bloc’s deepening commitment to silencing support for Palestinian rights.

In recent years, Israel has been pushing to broaden the definition of anti-Semitism – which simply means bigotry against Jews as Jews – to include criticism of Israel and its state ideology, Zionism.

The event was attended by Delphine Reyer, Facebook’s policy director for Africa and the Middle East.

While Facebook colludes with governments to crack down on Palestinians, violent and racist incitement by Israelis continues unabated.

More than 10 percent of Facebook posts written about Palestinians include denigrating language or calls for violence, according to a recent study by 7amleh, an advocacy group for Palestinian citizens of Israel.

One of the most notorious examples of online incitement against Palestinians was posted by none other than justice minister Ayelet Shaked.

On the eve of the 2014 Israeli assault on Gaza that left more than 550 Palestinian children dead, Shaked promoted a call for genocidal violence, including the slaughter of Palestinian mothers who give birth to “little snakes.”

Shaked’s call received thousands of “likes” before she removed it, embarrassed by the global exposure it gained after The Electronic Intifada translated it into English.

Last week, Shaked claimed that “terror groups” – the Israeli government’s catch-all term for Palestinian political parties and resistance organizations – were switching to Twitter, because so far that social network has been less willing to comply with government censorship than Facebook.

This indicates that after Facebook’s capitulation, other social media networks will be in Israel’s crosshairs.

RELATED: How Israel and its partisans work to censor the Internet