You Are Here: Home → The real objective of Trump’s Israel policy: split the Democratic Party off from its funding base

The real objective of Trump’s Israel policy: split the Democratic Party off from its funding base 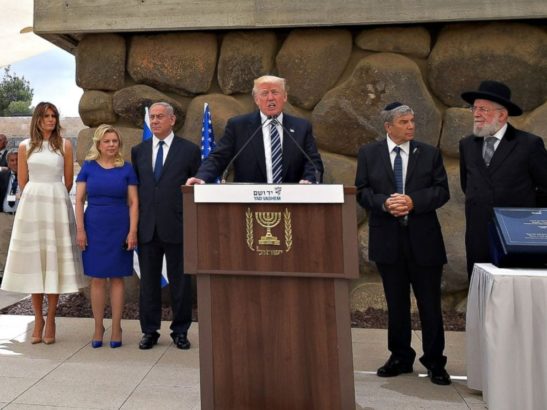 President Donald Trump speaks during a visit to the Yad Vashem Holocaust Memorial museum, stressing the “unshakable” bond between the US and Israel, May 23, 2017

Donald Trump’s Israel policies may have more to do with outmaneuvering Democrats than they do with any concern for Middle East peace, argues Jonathan Marshall.

“It’s still mysterious just how Mr. Trump believes he has advanced the cause of peace, or fortified America’s standing in the world, with that decision,” the New York Times editorialized. “Its costs in terms of American isolation, on the other hand, were evident throughout [Pence’s] trip.” Vice President Mike Pence’s trip to Israel last week revived warnings by foreign policy experts over the Trump administration’s controversial announcement that it will break with past policy and relocate the U.S. embassy to Jerusalem.

Henry Siegman, former executive director of the American Jewish Congress, earlier derided the “stunning level of ignorance” displayed by Trump’s decision. The Washington Post called it a “big risk,” predicting rightly that it would inflame opposition in the Arab world and give new ammunition to extremists in the region. Senator Bernie Sanders tweeted that the president’s move would “undermine the prospects for an Israeli-Palestinian peace agreement and severely, perhaps irreparably, damage our ability to broker it.”

All these and myriad similar comments were valid, but they missed the point. Trump doesn’t care a whit about peace in the Middle East, or who he alienates abroad: He cares about winning votes at home. Equally important, he cares about splitting the Democratic Party off from its funding base. To that end, Trump and his crew have a pretty good idea what they’re doing.

Exploiting the issue of Israel in much the same way, Republican strategists have aimed at neutralizing the Democratic Party’s largest individual donors, who are overwhelmingly Jewish.

Many of those donors also have a long history of financial support for Israel, and of discouraging public debates in the United States over its policies. Raising doubts about the Democratic Party’s commitment to Israel thus became a GOP ploy to dry up portions of that traditional funding base.

In 2003, just before the start of the Iraq war, House Majority Leader Tom DeLay, R-Tex., had exactly that strategy in mind when he denounced the Democratic Party to a group of 150 Orthodox Jewish leaders.

“DeLay has been the driving force in the Republican effort to capitalize on President Bush’s strong support of Israel and his leadership in the war on terrorism to weaken Democratic support and financial backing from Jews,” wrote political analysts Thomas Edsall and Alan Cooperman.

A GOP strategist told them, “There are only a few key pillars left holding up the Democratic coalition, especially financial pillars, and if we can fracture one of them, they [Democrats] are going to go into 2004 in big trouble.”

As part of that strategy to defund the Democratic Party, Republicans have sought to turn Israel from a bipartisan issue—a bedrock principle of the traditional Israel Lobby, led by the American Israel Public Affairs Committee (AIPAC)—into a partisan one their party could exploit.

That became easier as Israel itself turned hard right politically under the leadership of the Likud Party, headed now by Prime Minister Benjamin Netanyahu. His unyielding crackdown on the Palestinians, vigorous campaign against President Obama’s nuclear deal with Iran, and tacit support for Mitt Romney in 2012 thrilled conservatives, alienated liberal Democrats, and left strong supporters of Israel within the Democratic Party divided.

None of that bothers Christian conservatives in the United States, many of whom believe the gathering of Jews in Israel heralds the Second Coming of Christ. Borrowing from Trump’s bag of divisive culture-war issues, Netanyahu told a large Christian Zionist audience last summer that “Israel has no better friend in America than you,” calling them allies in a “struggle of free societies against the forces of militant Islam.”

Netanyahu was right: 78% of white evangelicals support Israel, more than almost any other group. Given that they are also among Trump’s strongest allies, it’s no wonder Republicans today are far more likely (52%) to have a favorable opinion of Netanyahu than Democrats (18%).

[Editor’s note: this is changing – see this and this.]

As a result, the GOP’s dream of capturing Israel as a partisan issue is coming true.

“The partisan divide in Middle East sympathies, for Israel or the Palestinians, is now wider than at any point since 1978,” the Pew Research Center reported this week. “Currently, 79% of Republicans say they sympathize more with Israel than the Palestinians, compared with just 27% of Democrats.”

The Embassy as a Political Wedge

Trump’s decision to relocate the U.S. embassy drove this wedge even deeper. A strong majority of Christian evangelicals backed the move. Alluding to the Book of Revelations, televangelist Pat Robertson said “it’s absolutely crucial in terms of biblical prophecy that [Israel] maintain control over [Jerusalem] … It’s going to be a major battle, it will be over Jerusalem.”

The fact that the United Nations General Assembly voted overwhelmingly to condemn the administration’s decision was a feature, not a bug. It gave UN Ambassador Nikki Haley raw meat to throw at Trump’s base of aggrieved America Firsters, as she spoke hotly of “exercising our right as a sovereign nation” and threatened to cut funding to the world body.

Outbreaks of violence by Palestinians in reaction to the announcement were also selling points for Trump and Netanyahu, furthering their narrative that the United States and Israel are lonely defenders of order and Judeo-Christian civilization.

“Religious conflicts, like racial and ethnic ones, are critical to Trump’s appeal,” observed journalist and political scientist Peter Beinart. “He needs Mexican-Americans to rape and murder white girls. He needs African-American athletes to ‘disrespect the flag.’ And he needs Muslims to explode bombs and burn American flags. . . . If Trump has to invent these dangers, he will. In the case of Jerusalem, however, he can go further: He can help create them.”

Above all, however, the decision furthered the GOP’s long-range strategy of driving a wedge between the Democratic Party and its biggest traditional funders.

Even as most American Jews oppose an immediate move of the embassy, mainstream Jewish organizations like AIPAC, which disproportionately represent Jewish donors, generally greeted the decision (no doubt with some private reservations).

Hard-line pro-Israel political funders lauded the administration’s break with past U.S. policy. President Trump reportedly acted at the urging of his biggest backer, the hawkish casino billionaire, Sheldon Adelson. According to reporter Eli Clifton, Adelson and his wife donated $35 million to help elect Trump in 2016, in part because Trump promised to move the embassy. Adelson also forked over another $5 million for Trump’s inauguration.

As grassroots Democrats grow more skeptical of Israel’s right-wing government, the question is whether major Democratic donors will tolerate a diversity of opinion toward Israel within the party, in keeping with progressive values.

For example, Hillary Clinton’s single biggest financial backer was Adelson’s friend Haim Saban, a strongly pro-Israel billionaire. To keep him and other large donors on board, Clinton strongly attacked the Boycott, Divestment, and Sanctions (BDS) movement and promised to meet with Netanyahu her first month in office. If the Democrats next time put up a candidate like Bernie Sanders, who is more critical of Israel’s leadership, there’s strong reason to believe funders like Saban would hold onto their wallets.

The specter of losing critical financial support will undoubtedly motivate more clashes between party insiders and progressive insurgents who decline to give unconditional support to Israel. The Democratic Party may try to sidestep such conflicts by focusing on economic, environmental, and other winning causes. But Trump and the GOP will surely keep stoking the Middle East as a hot domestic wedge issue as long as they can.

Jonathan Marshall is the author or co-author of five books on international affairs and national security, including The Lebanese Connection: Corruption, Civil War, and the International Drug Traffic (Stanford University Press, 2012).