You Are Here: Home → Israel imposes taxes on church, UN properties in Jerusalem 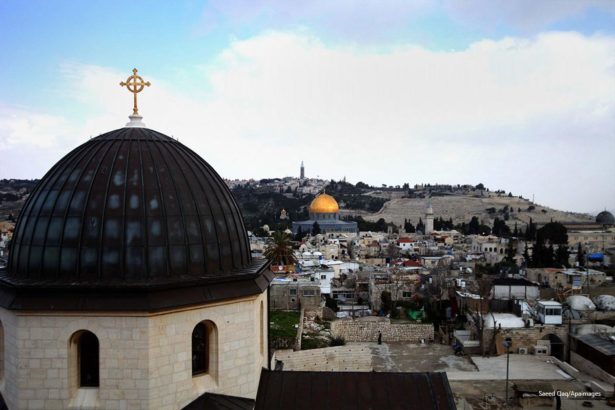 A general view from the tower of the Church of Redeemer shows the Dome of the Rock mosque and the cross of the Church of the Holy Sepulchre in the old city of Jerusalem, on February 17, 2014 [Saeed Qaq/Apaimages]

Israel has begun to tax churches and UN properties in occupied East Jerusalem – reversing a policy that has been in place since 1967. (This will not apply to buildings used for worship.)

The government imposed restrictions on the bank accounts of evangelical, Armenian and Roman churches on the grounds of non-payment of property taxes.

The Israeli newspaper said today that the Israeli municipality will collect tens of millions of dollars from churches and United Nations institutions as a result of the real estate taxes.

It added that the Mayor of Jerusalem, Nir Barkat, changed the policy applied since the Israeli occupation of East Jerusalem in 1967.

The Jerusalem Municipality informed the Ministry of Finance and the Prime Minister’s Office that it is demanding that church and international institutions pay municipal taxes on properties owned by them.

The paper pointed out that the ruling will affect 887 properties which belong to the church and the UN.

It is estimated that the municipality will earn 650 million shekels ($191 million) from the new policy.

“The talk is not about the role of worship, which is excluded from the property tax under the law, but properties that are used for purposes other than prayer and some are used for commercial activities,” Israel Hayom explained.

It added that this week the municipality imposed restrictions on the bank accounts of evangelical, Armenian and Roman churches on the grounds of non-payment of property taxes.

“The decision of the state [exemption] over the past years has caused losses of up to one billion shekels. It is unreasonable for the residents of Jerusalem to pay the price of garbage collection, lighting, gardening and street construction, while preventing the municipality from raising large amounts of money that could help it significantly in the development of the city and improve services for the population [of the listed properties].”

“Either the state will compensate us financially for not collecting these funds or we will collect them according to the law,” the municipality said.

US President Donald Trump’s decision last month to recognise Jerusalem as the capital of Israel has encouraged the Israeli government to annex large swathes of the city and force its laws on it. World leaders and international organisations rallied to condemn the move and its disregard for the final status negotiations of the 1993 Oslo Accords.