You Are Here: Home → Israeli forces kill 19-year-old with bullet to the head

Israeli forces kill 19-year-old with bullet to the head 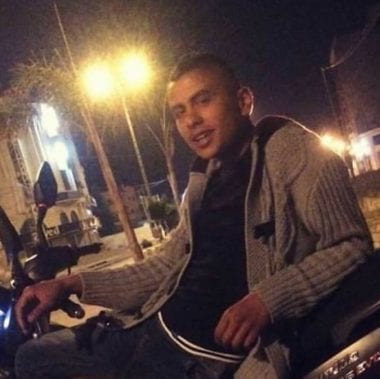 Israeli soldiers killed Ahmad Samir Abu ‘Obeid, 19, with a live bullet to the head during an invasion into the West Bank carried out by 22 armored military vehicles and 2 bulldozers. It appears that the killing of Obeid was random; soldiers were searching for a different man.

February 03, 2018: Ahmad Samir Abu ‘Obeid, 19, was killed by Israeli soldiers with a live round in the head, during a massive military invasion into Burqin town, west of Jenin, in the northern part of the West Bank.

The Palestinian Health Ministry has confirmed that the soldiers shot Ahmad with a live round in his head, causing a very serious injury, before medics rushed him to Jenin Governmental Hospital, where he died from his wounds.

The Ministry added that the soldiers also shot two other young Palestinian men with live rounds in their legs, and six with rubber-coated steel bullets, in addition to causing dozens to suffer the severe effects of teargas inhalation, after the army attacked locals, who protested the invasion.

The army also arrested four young Palestinian men, and demolished a room and a barn, in addition to causing damage to several structures and cars, before withdrawing from the town.

The invasion was carried out by twenty-two armored military vehicles, and two bulldozers, before the soldiers broke into and searched many homes, and used K9 units in searching the properties, causing anxiety attacks among many Palestinians, especially children.

After the army withdrew from the town, hundreds of Palestinians marched in Ahmad’s funeral procession, while chanting against the ongoing Israeli military occupation.

The Israeli invasion into several areas in the Jenin Governorate started when the soldiers invaded Kafeer village, south of the Jenin city, after surrounding it and declaring it a closed military zone.

The soldiers conducted extensive military searches of homes and detained two siblings, identified as Thieb Walid Ershaid, 43, and his brother Qa’qaa, 42, after surrounding their homes.

The shooting death of Abu Obeid came during the invasion of Wadi Burqin by the Israeli military early Saturday morning to besiege the home where the army believed that the wanted man Ahmad Nasr Jarrar, was hiding.

Ahmad Nasr Jarrar was wanted by the Israeli military for allegedly killing an Israeli settler on January 8th.

Following that killing, the Israeli military invaded many nearby villages and conducted house-to-house searches.

On January 18th, the Israeli army besieged a home where they mistook Ahmad Ismail Jarrar for his cousin, and killed him. Ahmad was from Burin, west of Jenin. Source: IMEMC

For charts on all Palestinians & Israelis killed since 2000 go here.