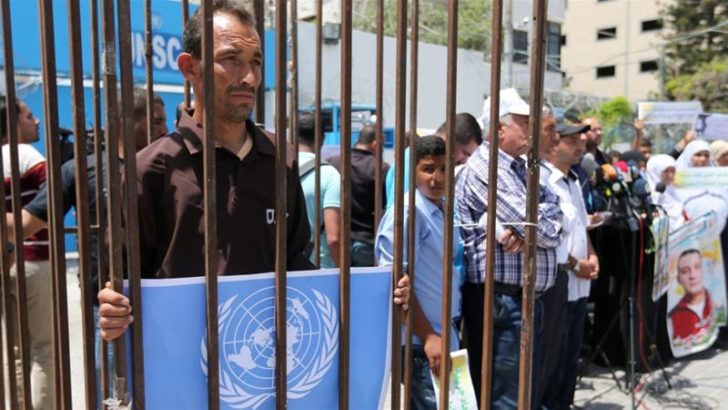 The Palestinian National Authority has called on the United States to mediate between Israel and roughly 1,000 Palestinian political prisoners in Israeli jails who are on day 40 of hunger strike. President Mahmoud Abbas said:

We have explained in detail to American envoy Jason Greenblatt the issue of the prisoner strike and we have called for American intervention to ensure that the rights of prisoners are protected and their humanitarian demands are granted.

The International Committee of the Red Cross, however, released a lukewarm statement stating that as a “neutral” institution that it “neither supports nor advocates against a hunger strike,” but said it is engaging in “confidential dialogue with the detaining authorities.”

The ICRC has been shockingly complicit in the Israeli occupation and its treatment of Palestinian prisoners. Via Samidoun:

It should not be forgotten that the ICRC are also not mere bystanders; it was the ICRC’s action that cut the Palestinian prisoners’ family visits one year ago from twice monthly to once monthly, claiming “budget restrictions” despite Palestinian offers to fund additional visits. The restoration of that second monthly visit is in fact one of the demands of the hunger strikers – one which the ICRC is in every position to implement immediately.

Israel’s incarceration of Palestinians in prisons located in Israel is illegal under international law. The Fourth Geneva Convention states that occupying powers are not permitted to imprison people outside of the territory they’re occupying. (Learn more)

The hunger strikers have a range of demands, including an end to the denial of family visits, the right to proper health care and medical treatment, the right to pursue distance higher education, an end to solitary confinement, and an end to administrative detention (imprisonment without charge or trial).

1) Call, write, and tweet your Congressional rep and ask them to: