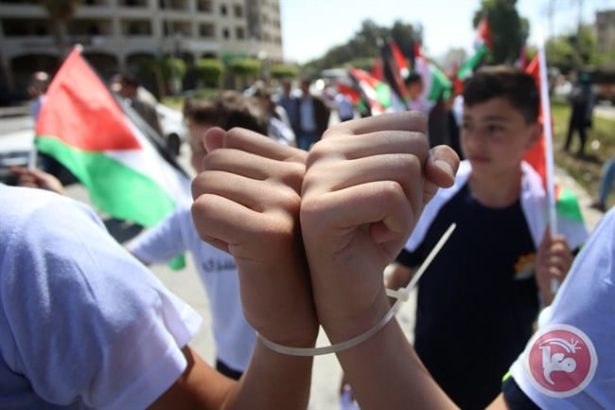 BETHLEHEM (Ma’an) — A day after hundreds of Palestinians held in Israeli prisons suspended a 40-day mass hunger strike, more details emerged on Sunday regarding the outcome of negotiations between hunger strikers and the Israel Prison Service (IPS), with a Palestinian Committee of Prisoners Affairs official saying that 80 percent of the strike’s demands were met, though an IPS spokesperson denied the claim.

After the strike ended in the early hours on Saturday following 20 hours of negotiations, Palestinian officials did not immediately reveal details regarding the achievements of the hunger strike. An IPS spokesperson only confirmed that family visitation sessions were restored to two times a month, adding that IPS was not considering the talks “negotiations,” as they only reinstated a previous policy and did not provide any new concessions to the prisoners.

On Sunday, head of the Palestinian Committee of Prisoners’ Affairs Issa Qaraqe said in a statement that 80 percent of the hunger strikers’ demands were met according to the agreement reached after negotiations between IPS and representatives of hunger strikers led by imprisoned Fatah official Marwan Barghouthi.

Qaraqe described the outcome of the hunger strike as “a fundamental transformation in the terms of the prisoners’ living conditions.”However, IPS spokesperson Hana Herbst told Ma’an that “contrary to the reports delivered by Issa Qaraqe, no benefits were given to national security prisoners in return to quitting the hunger strike and there were no negotiations on this matter.”

Herbst reiterated IPS’s stance that the suspension of the hunger strike “was made possible due to the National Palestinian Authority agreeing to fund the second visit instead of the Red Cross who up to a few months ago was the funding organization,” and not due negotiations between hunger-striking prisoners and IPS. The spokesperson did not comment on reports from Qaraqe that said a mechanism was also established for further negotiations, to continue discussions on agreements that were so far made only “in principle,” and regarding the original demands of the strike that were not met at all.

A committee consisting of prisoners Karim Yunis, Nasser Abu Hmeid, Hafith Sharayaa, Nasser Uweis, Ammar Mardi, and Ahmad Barghouthi will continue such talks with IPS, according to Qaraqe.Qaraqe also highlighted in his statement that the Fatah movement appointed Karim Yunis, the longest-serving Palestinian prisoner, as a member of Fatah’s Central Committee, describing that appointment as “a major political achievement of the hunger strike,” for defying Israel’s designation of Palestinian prisoners as terrorists rather than political detainees.

According to committee lawyer Karim Ajweh, who met with hunger-striking prisoner Nasser Abu Hmeid — a member of the team who negotiated the agreement at Ashkelon prison Friday night — the major terms agreed upon were listed as follows: